Not to be confused with Chittagong, a port city outside this region. 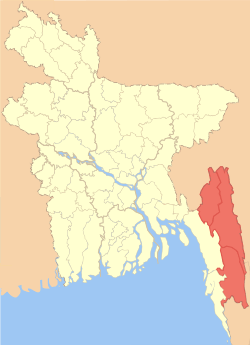 The Chittagong Hill Tracts (CHT; Bengali: পার্বত্য চট্টগ্রাম, Parbotto Choŧŧogram; or the Hill Tracts for short), is an area within the Chittagong Division in southeastern Bangladesh, bordering India and Myanmar (Burma). Covering 13,295 square kilometres (5,133 sq mi), they formed a single district until 1984, when they were divided into three districts: Khagrachari District, Rangamati Hill District, and Bandarban District. Topographically, the Hill Tracts are the only extensively hilly area in Bangladesh.

With Ladakh, Sikkim, Darjeeling, Bhutan, and Sri Lanka, they constitute one of the few remaining abodes of Buddhism in South Asia.

Hill Tracts (CHT) the only extensive hilly area in Bangladesh lies in southeastern part of the country (210 25' N to 230 45' N latitude and 910 54' E to 920 50' E longitude) bordering Myanmar on the southeast, the Indian state of Tripura on the north, Mizoram on the east and Chittagong district on the west. The area of the Chittagong Hill Tracts is about 13,184 km2, which is approximately one-tenth of the total area of Bangladesh. The Chittagong Hill Tracts, combining three hilly districts of Bangladesh Rrangamati, khagrachhari and Bandarban districts.[1] The mountainous rugged terrain with deep forests, gives it a diverse character from rest of Bangladesh

According to the census of 1991, the population was 974,447, of which 501,114 were tribal peoples and the rest were from Bengali (Muslim and Hindu) community. The Mongoloid tribal peoples – include the Chakma, Marma, Tripura, Tanchangya, Chak, Pankho, Mro, Murung, Bom, Lushei tribe, Khyang people, and Khumi,[2] and differ markedly from the Bengali majority of Bangladesh with respect to language, culture, physical appearance, religion, dress and farming methods.[3]

The population of the three districts (zilas) totalled 1,587,000 in the provisional returns of the census of 2011, make population density rough 120 per km2. About 34% of the population are tribal peoples and mainly followers of Theravada Buddhism; 65% of the inhabitants are bengali (Muslims and Hindus); and 1% Christians or animists.[4] 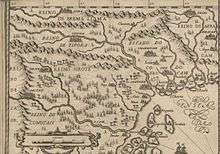 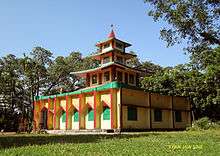 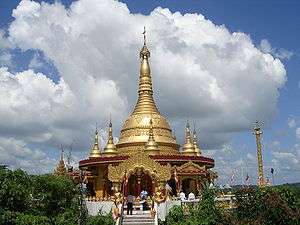 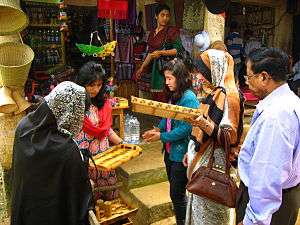 A Chakma shop with handicrafts on display, and a small crowd of tourists. The Hill region is a tourist attraction in Bangladesh. 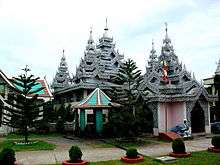 The early history of the Chittagong Hill Tracts, a record of constantly recurring raids on the part of the eastern hill tribes and of the operations undertaken to repress them, of which narrative will be found in the article on the Lushai Hills (Eastern Chakma kingdom).In the early 16th century the chakma people came from Arakan(Burma) due to repression and hostility by Rakhaine people. The Chakma are the single largest tribe, comprising half of the tribal population. The Marma people are the second largest tribe. They came from Burma when arakan was conquered by Burmese king Bodawpaya. The tribal peoples emigratted from burma due to repression by the burmese king settled in the hill tracts with the consent of subedar of bengal who is the representattive of Mughal emperor. The Bengali people lived in chittagong hill tracts from the later period of British rule. The Bengali People comprised majority of the population of Chittagong Hill Tracts.

Mughal and early British records name the region Jum Bungoo, Jum mahal or Kapas mahal.[5][6] In 1787, the East India Company made the region its tributary after battling tribal leaders.[7]

The use of the name Chittagong for this area dates to the 1860 British annexation of the region, bringing it under direct control of British India.[7] Situated beyond the inland hills, Chittagong proper is a coastal area in the plains where the British were based. As colonial influence grew, "Chittagong" enlarged as well, expanding eastwards[8] to subsume the Hill Tracts under its revenue-collection territory.[6]

When the 1901 census was taken there were no towns, and 211 of the villages had populations of less than 500 apiece; only one exceeded 2,000. The population density, excluding the area of uninhabited forest (1,385 square miles), was 33 persons per square mile. There was a little immigration from Chittagong, and a few persons had emigrated to Tripura. The proportion of females to every 100 males was only 90 in the district-born, and 83 in the total population. Buddhists numbered 83,000, Hindus 36,000, and Muslims 5,000.[10]

The Chittagong Hill Tracts, combining three hilly districts of Bangladesh, were once known as Korpos Mohol, the name used until 1860. In 1860 it was annexed by the British and was made an administrative district of Bengal. As of today, it is a semi-autonomous region within Bangladesh comprising the districts of Chengmi (Khagrachari District), Gongkabor (Rangamati Hill District), and Arvumi (Bandarban District).

The last viceroy, Louis Mountbatten, 1st Earl Mountbatten of Burma, who considered the grant of independence to India as his act of crowning glory, was ambitious to achieve this "superhuman" task in record time. He said that before accepting the post of viceroy, he had told George VI, who was his cousin: "I am prepared to accept the job only on one condition. India must be granted independence by July, 1948 and I will not stay there a day longer". Mountbatten came to India in March, 1947 and this left him just about sixteen months to complete such a gigantic task. In reality, he achieved it in five months, on 15 August 1947, for which he was given much credit.

Originally, the award of the Boundary Commission was to be made public on 13 August. But Mountbatten was reluctant to make this public. According to Philip Ziegler, the author of Mountbatten's official biography, the case of the Chittagong Hill Tracts was uppermost in Mountbatten's mind. Mountbatten "foresaw an Independence Day marred by rancour, Nehru boycotting the ceremonies, India born in an atmosphere not of euphoria but of angry resentment." So Mountbatten decided to announce the award only on 16 August when the celebrations were over. As Zeigler writes, "India's indignation at the award of the Chittagong Hill Tracts to Pakistan may have been a factor in making up Mountbatten's mind to keep the reports to himself till after independence".

Mountbatten was himself surprised by the ferocity of Vallabhbhai Patel's reaction to the issue. In his memoirs he wrote, "The one man I had regarded as a real statesman with both his feet firmly on the ground, and a man of honour whose word was his bond, had turned out to be as hysterical as the rest. Candidly I was amazed that such a terrific crisis should have blown up over so small a matter. However, I have been long enough in India to realise that major crises are by no means confined to big matters." Leonard Mosley in his book The Last Days of the British Raj puts it as "a matter for Mountbatten's conscience".

During the 1970s and 80s, the government of Bangladesh started to settle the empty area with Bengali people peacefully due to over population as they were given shelter in the area hundreds years ago considering humanitarian crisis by their forefathers. These attempts were resisted by the hill tribes, who, with the latent support of neighboring India, formed a guerrilla force called Shanti Bahini. As a result of the tribal resistance movement, successive governments turned the Hill Tracts into a militarized zone.[11]

Following years of unrest, an agreement was formed between the government of Bangladesh and the tribal leaders which granted a limited level of autonomy to the elected council of the three hill districts.[12]

The 1997 Chittagong Hill Tracts Peace Accord signed between the then Sheikh Hasina government and the Parbatya Chattagram Jana Samhati Samiti (party of the tribal peoples) has been opposed by the opposition parties as well as a fraction of the tribal rebels.[13] Opposition parties argued that the autonomy granted in the treaty ignored the Bengali community. The successive Khaleda Zia government promised to implement the peace treaty, despite their opposition to it during the previous government's term. According to the Ministry of Chittagong Hill Tracts Affairs, a peace treaty between the Government of Bangladesh and Parbattya Chattagram Jana Samhati Samiti was signed on 2 December 1997.

Land use and environment

Tobacco cultivation is damaging the ecology of the area, with loss of indigenous trees such as Chukrasia tabularis (Indian mahogany), and soil fertility. Many of the farmers of Rangamati, Bandarban and Khagrachhari districts of Bangladesh have been losing their interests in cultivating indigenous crops like paddy, banana, maize, sesame, cotton, potato, pumpkin etc. as they became defaulters of loans provided by tobacco companies, they said.[14] 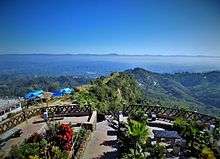 The present shifting cultivation system with short fallow in the Chittagong Hill Tracts has accelerated erosion, land degradation, deforestation, and impoverishment of tribal people in CHT. If the present state of degradation is continued, most of the areas under shifting cultivation will be severely degraded[17] and the future generations will face more difficulties to eke out their livelihoods on further degraded land. Although there is some scope for shifting cultivators to leave the degraded fields and move to other areas. It is estimated that on average eight hectares of land is necessary for the sustenance of a family in the Chittagong Hill Tracts. If this ratio is adopted, 1,240,000 ha land is required to sustain the present population; however, the total land available, excluding the reserve forest, is 928,000 ha. Shifting cultivation, therefore, cannot fulfill even the subsistence requirements of the people. In such a situation, either large non-farm employment opportunities need to be created or more productive land-use systems need to be developed and adopted. Given the sluggish growth of the economy, there is limited scope for generating adequate non-farming employment opportunities in the near future. It is, therefore, imperative to replace the present shifting cultivation system with more productive and sustainable land use systems to enable people to secure their livelihoods.[18]