Rapid application development (RAD) is both a general term used to refer to alternatives to the conventional waterfall model of software development as well as the name for James Martin's approach to rapid development. In general, RAD approaches to software development put less emphasis on planning and more emphasis on process. In contrast to the waterfall model, which calls for rigorously defined specification to be established prior to entering the development phase, RAD approaches emphasize adaptability and the necessity of adjusting requirements in response to knowledge gained as the project progresses. Prototypes are often used in addition to or sometimes even in place of design specifications.

RAD is especially well suited (although not limited to) developing software that is driven by user interface requirements. Graphical user interface builders are often called rapid application development tools. Other approaches to rapid development include Agile methods and the spiral model.

Rapid application development is a response to processes developed in the 1970s and 1980s, such as the Structured Systems Analysis and Design Method and other Waterfall models. One of the problems with these methods is that they were based on a traditional engineering model used to design and build things like bridges and buildings. Software is an inherently different kind of artifact. Software can radically change the entire process used to solve a problem. As a result, knowledge gained from the development process itself can feed back to the requirements and design of the solution.[1] The waterfall solution to this was to try and rigidly define the requirements and the plan to implement them and have a process that discouraged changes to either. The new RAD approaches on the other hand recognized that software development was a knowledge intensive process and sought to develop flexible processes that could take advantage of knowledge gained over the life of the project and use that knowledge to reinvent the solution.

The first such RAD alternative was developed by Barry Boehm and was known as the spiral model. Boehm and other subsequent RAD approaches emphasized developing prototypes as well as or instead of rigorous design specifications. Prototypes had several advantages over traditional specifications:

Starting with the ideas of Barry Boehm and others, James Martin developed the rapid application development approach during the 1980s at IBM and finally formalized it by publishing a book in 1991, Rapid Application Development. This has resulted in some confusion over the term RAD even among IT professionals. It is important to distinguish between RAD as a general alternative to the waterfall model and RAD as the specific method created by Martin. The Martin method was tailored toward knowledge intensive and UI intensive business systems.

These ideas were further developed and improved upon by RAD pioneers like James Kerr and Richard Hunter, who together wrote the seminal book on the subject, Inside RAD,[3] which followed the journey of a RAD project manager as he drove and refined the RAD Methodology in real-time on an actual RAD project. These practitioners, and those like them, helped RAD gain popularity as an alternative to traditional systems project life cycle approaches. 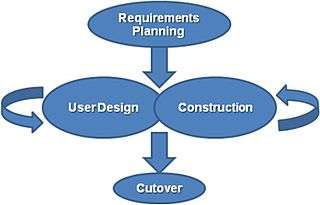 Phases in the James Martin approach to RAD

The James Martin approach to RAD divides the process into four distinct phases:

In modern Information Technology environments, many systems are now built using some degree of Rapid Application Development[7] (not necessarily the James Martin approach). In addition to Martin's method, Agile methods and the Rational Unified Process are often used for RAD development.

The advantages of RAD include:

The disadvantages of RAD include: