Assaidi began his career in the Netherlands with AZ Alkmaar. After failing to earn a contract with AZ, he played with second tier club FC Omniworld and then De Graafschap before joining Heerenveen in 2009. His performances at the Abe Lenstra Stadion earned him international recognition with Morocco and also attracted the attentions of bigger European clubs. Assaidi signed with English Premier League side Liverpool in August 2012 for a fee of £2.4 million. However he struggled to break into the first team at Anfield and joined Stoke City on loan for the 2013–14 and 2014–15 seasons, before being sold to Al-Ahli in January 2015.

Assaidi was born in Beni-Boughafer, in northern Morocco, before his family moved to Amsterdam. He began his career with the AZ Alkmaar academy where he spent three years before leaving in 2006 to begin his professional career at Omniworld in the Eerste Divisie. After two seasons with the club from Almere, where he scored 3 goals in 36 games, he moved to De Graafschap to play in the Eredivisie, the top flight of Dutch football in the summer of 2008. Assaidi spent just one year with the club, before moving to SC Heerenveen on the last day of the transfer window. The move was seen as surprising because Heerenveen had said that they were not planning to buy any new players, but the performance of Assaidi at the beginning of the 2009–10 Eredivisie, scoring five goals in five games, meant that an exception was made to bring Assaidi to the club.

Assaidi made his debut for SC Heerenveen in a 1–0 loss at home to arch-rivals FC Groningen, where he came on in the 71st minute as a substitute for Paulo Henrique. He also scored his first goal for Heerenveen in the second round of the KNVB Cup, in a 7–0 away win against SDC Putten. After coming off the bench in the next three league games, Assaidi was given his first place in the starting line-up for in an away match against Willem II, which Heerenveen lost 4–1. Assaidi's first league goal for Heerenveen came in a 3–1 defeat to Heracles Almelo, which was also the first game where he played the full 90 minutes for the club. Assaidi lost his starting place towards the end of the season, with only 2 starts in the last 14 games of the season. It was during this period that Assaidi received the first red card of his career in an away match against Roda JC Kerkrade, after just 9 minutes.

Under new manager Ron Jans, Assaidi became a key figure in the side. With 2 goals against his old club De Graafschap and Vitesse Arnhem, combined with 2 assists against De Graafschap and NAC Breda, Assaidi was responsible for 4 goals in the first 6 games, the same amount of goals that he created in his whole previous season. Assaidi had his best month in November 2010, when he scored in a 2–0 win against Excelsior, and delivered 2 assists against Heracles Almelo (3–2), 1 against Feyenoord (2–2) and 2 against Willem II (5–0). In December, Assaidi displayed a Man of the Match-performance in a home match against defending champions FC Twente, where, despite an ankle injury, Assaidi led Heerenveen to a crushing 6–2 win over the champions by scoring the first hat-trick of his career, whilst also delivering 2 assists and winning a penalty. After the match, he was applauded for his performance by Jans, who said that Assaidi deserved a "10 out of 10 for his play".[2][3] His performances would later be rewarded with a first international call-up by Moroccan team coach Erik Gerets for a friendly against Niger.[4]

On 17 August 2012, Premier League side Liverpool agreed a deal to sign Assaidi for an undisclosed fee thought to be in the region of £2.4 million.[5][6][7] Liverpool manager Brendan Rodgers hailed the deal, saying that he was "delighted", and described Assaidi as "an exciting player...that will excite the crowd".[8] He made his debut on 20 September against Young Boys in a 5–3 Europa League win, before registering an assist in a 2–1 win over West Bromwich Albion in the League Cup six days later.[9][10] Due to impressive performances from young fellow wingers Raheem Sterling and Suso, Assaidi failed to break through to Liverpool's regular starting line-up making 12 appearances in 2012–13 of which four were in the league.

On 27 August 2013 Assaidi joined Stoke City on loan for the 2013–14 season.[11][12] Speaking after joining Stoke Assaidi revealed that he turned down other Premier League clubs after he held positive talks with manager Mark Hughes.[13] He made his debut for Stoke in a 3–1 victory over Walsall in the League Cup on 31 August 2013.[14] He played in the next round of the League Cup Tranmere Rovers after coming on as a 61st-minute substitute, he provided an assist for Peter Crouch to secure a 2–0 victory.[15] He made his Premier League debut for Stoke on 5 October 2013, coming on as a 63rd-minute substitute in a 1–0 defeat against Fulham.[16]

Assaidi scored his first goal for Stoke in a League Cup match against Birmingham City on 29 October 2013.[17] On 7 December 2013, he scored the winning goal in a 3–2 victory against Chelsea, which was Stoke's first league win over the Blues since 1975.[18] Assaidi scored a similar goal against Newcastle United on 26 December 2013 and also found the net against Everton on 1 January 2014.[19][20] On 20 February 2014 it was revealed that Assaidi suffered ligament damage during a club training camp in Dubai, ruling him out for up to six weeks.[21] Upon returning from injury Assaidi scored in a 4–1 win against Fulham on 3 May 2014.[22] Stoke manager Mark Hughes admitted that he would like to sign Assaidi on a permanent basis.[23] However Stoke were unhappy with Liverpool's asking price.[24]

On his return to Liverpool he was sold to UAE Arabian Gulf League side Al-Ahli Dubai for a fee reported to be in the region of £4.7 million.[28][29] He made 14 appearances (six starts) in the year's AFC Champions League, in which his team lost the final 1–0 on aggregate to Guangzhou Evergrande.[30]

On 15 November 2016, Assaidi was released by the club. Assaidi admitted, that he only signed for the club due to the salary. He was ready going back to Premier League.[31] 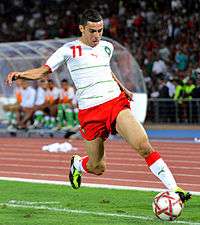 Assaidi playing for Morocco against Algeria in 2011.

Assaidi was eligible to play for both the Netherlands or Morocco. His first invitation for a senior team came in February 2011, when the national team coach of Morocco, Eric Gerets, called him up for Morocco's friendly match against Niger.[4] Assaidi made his debut in Morocco's 4–0 win over Niger, coming on as a substitute in the 77th minute for Adel Taarabt. However, since it was a friendly, Assaidi was still eligible to play for the Netherlands. He announced on 14 February 2011, that his choice for Morocco was definite.[32]

Assaidi scored his first goal on 4 June 2011 in a 4–0 2012 Africa Cup of Nations qualifier win against Algeria.[33] In the final tournament in Gabon and Equatorial Guinea, he started Morocco's opening game at the Stade d'Angondjé in Libreville, being replaced by Adel Taarabt at half time in a 2–1 loss to rivals Tunisia.[34] He took no further part as Morocco were eliminated from their group. Assaidi started two games in the next year's edition of the tournament in South Africa, where his team fell at the same hurdle.

On 16 November 2014, Assaidi scored his first international goal for over three years, a long-range equaliser in a 2–1 friendly win over Zimbabwe.[35]

A. ^ The "Other" column constitutes appearances and goals in the AFC Champions League and Eredivisie play-offs.