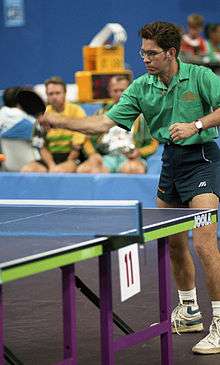 Table tennis at the 1992 Summer Paralympics.

Para table tennis is a disabled sport which follows the rules set by the International Table Tennis Federation (ITTF). The usual table tennis rules are in effect with slight modifications for wheelchair athletes. Athletes from disability groups can take part. Athletes receive classifications between 1-11. Class 1-5 are for those in wheelchairs and class 6-10 for those who have disabilities that allow them to play standing. Within those groups, the higher classification means the more function the athlete has. Class 11 is defined for players with an intellectual disability.

The roles of classification are to determine eligibility to compete for athletes with disability and to group athletes equitably for competition purposes.[1][2] Athletes are grouped by reference to functional ability, resulting from their impairment. 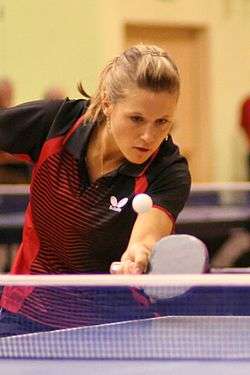 Laws of table tennis in wheelchair

There are no exceptions to the laws of table tennis for standing players with a disability. All players play according to the laws and regulations of the ITTF. The umpire may relax the requirements for a correct service if the compliance is prevented by physical disability.[3]

If the receiver is in wheelchair, the service shall be a let under the following circumstances:[4]

If the receiver strikes the ball before it crosses a sideline or takes a second bounce on his or her side of the playing surface, the service is considered good and no let is called.[5]

When two players who are in wheelchairs are a pair playing doubles, the server shall first make a service, the receiver shall then make a return but thereafter either player of the disabled pair may make returns.[6] However, no part of a player's wheelchair shall protrude beyond the imaginary extension of the centre line of the table. If it does, the umpire shall award the point to the opposing pair.

If both players or pairs are in a wheelchair, the player or the pair score a point if:[7]

Wheelchairs must have at least two large wheels and one small wheel.[5] If the wheels on the player's wheelchair become dislodged and the wheelchair has no more than two wheels, then the rally must be stopped immediately and a point awarded to his or her opponent.

The height of one or maximum two cushions is limited to 15 cm in playing conditions with no other addition to the wheelchair. In team and class events, no part of the body above the knees may be attached to the chair as this could improve balance.