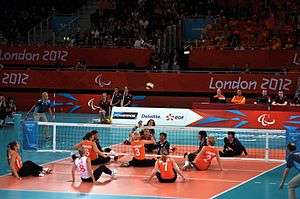 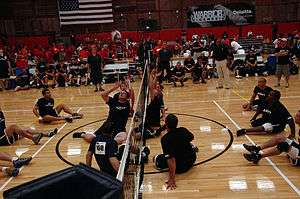 In sitting volleyball, a 0.8 meter-wide net is set at 1.15 meters high for men and 1.05 meters high for women. The court is 10 x 6 meters with a 2-meter attack line. Players must have at least one buttock in contact with the floor whenever they make contact with the ball. It is also possible to block the serve and jousts are generally replayed.[1] Athletes with the following disabilities are eligible to compete in sitting volleyball: athletes with amputations, spinal cord injuries, cerebral palsy, brain injuries and stroke. There are no athlete classifications by disability.[2]

Skills are largely identical to the sport of volleyball and the following game terminology apply:

At the 2016 Summer Paralympics the men's competition was won by Iran and the gold medal in the women's contest went to the United States.[4]