The Swedish goalball team at the 2004 Athens Paralympic games

Goalball is a team sport designed specifically for blind athletes, originally devised in 1946 by the Austrian Hanz Lorenzen and German Sepp Reindle as a means of assisting the rehabilitation of visually impaired World War II veterans.[1] Participants compete in teams of three, and try to throw a ball that has bells embedded in it into the opponents' goal.[2] Teams alternate throwing or rolling the ball from one end of the playing area to the other, and players remain in the area of their own goal in both defense and attack. Players must use the sound of the bell to judge the position and movement of the ball. Games consist of two 12-minute halves (formerly 10-minute halves).[2] Eyeshades allow partially sighted players to compete on an equal footing with blind players.[2] Eyepatches may be worn under eyeshades to ensure complete coverage of the eye, and prevent any vision should the eyeshades become dislodged.

Goalball gradually evolved into a competitive game during the 1950s and 1960s, and was eventually nominated as a demonstration sport at the 1976 Summer Paralympics in Toronto.[1] The sport's first world championship was held in Austria in 1978. Goalball was added to the programme of the 1980 Summer Paralympics in Arnhem,[1] becoming the first Paralympic sport designed exclusively for disabled players.[3] International Blind Sports Federation (IBSA), responsible for a range of sports for the blind and partially sighted, is the official governing body for the sport.

A game of goalball in progress

International Blind Sports Federation rules require the field of play to be 18 metres (59 ft) long by 9 metres (30 ft) wide.[4] Goals span the width of the pitch.[5] The court is divided into six even sections, 3 by 9 metres (9.8 by 29.5 ft). At either end, just in front of the goal, is the team area. Beyond that is each team's landing zone. The middle two sections are collectively referred to as the neutral zone.

The lines of the court are made by placing tape over lengths of twine. This makes the line both visual (for officials) and tactile (for players). The team area and landing zone, including the boundary, goal lines and high-ball lines, are always marked in this way. Furthermore, the team area has six hash marks (three at the front, one on either side, and one on the goal line) to assist with player orientation.

The ball weighs 1.25 kilograms (2.8 lb) and has eight holes and contains several noise bells. The ball's diameter is around 24 centimetres (9.4 in).[5] At Paralympic level, the ball has been clocked leaving the hand in excess of 60 kilometres per hour (37 mph). Despite this, through training and some padding, there are very few injuries. 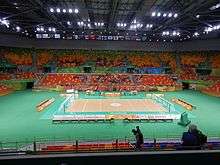 Goalball court at the Future Arena in Rio de Janeiro

Unlike most games, there are more officials than players on the court:

Each team has three players on the court at a time, with 1–3 substitute players on the bench. There are three standard positions to play. Players, while there is typically no official designation, often have a position they are best at or prefer, though some players will play any of the three.

The Center is the player most responsible for defense. They typically line up at the center hash-mark at the front of the team area, though there are various defensive arrangements. The center is the most defensive position simply because they must be able to move both to the left and right to defend. They are also typically the defensive coordinator, as they can more accurately determine which opposing player has the ball due to being square to the opposing team.

The Left and Right Wings generally line up at the end of the hash marks coming off of the respective sidelines. Their main defensive responsibilities are keeping the ball out of either corner of the goal, though they also defend some towards the center. Typically, the wings are the main offense, allowing the Center to reserve their energy for defense, while they attempt to score. This is not to say that the Center is not also an offensive threat, just that they generally are more focused on keeping the ball out of their own net than putting it into the opponents'.

A goal is one point and is scored when the ball completely crosses the goal line. The team with the higher score at the end of regulation time is the winner. If regulation results in a tie, two three-minute overtime periods are played, for a golden goal (first goal concludes the game). If no goal scored during overtime, penalty throws and sudden death penalty throws are taken. Scores can be an intense 1:0, or 8:15. When a maximum goal difference of ten is reached, a mercy is called and the leading team is declared the winner.

To score, a player must roll or bounce the ball down the length of the court, past the opposing defenders, and into the opponents' goal. Typically, the player with the ball will stand, orient themselves using the tactile lines, sounds from teammates, and/or the crossbar of their own goal. The player will then stride forward, lean low, and roll or sidearm the ball down the court.

The ball must hit in the player's own landing zone, and anywhere in the neutral zone. So long as it hits each zone, the style of throw is entirely up to the player in question. Many players will take several strides and release the ball as close to their own highball line as possible; leaning low to ensure a legal throw. Some players will throw after spinning; transferring the momentum of the spin into additional velocity. Others are able to throw the ball so that it will bounce just once in each of the required zones. Most elite players, are effective when using multiple types of throws.

The defending players stay within the team area, generally in somewhat staggered positions to avoid collisions. When they hear the other team throw the ball, they 'lay out', that is slide on their hips and stretch their arms above their heads and extend their legs in order to cover as much distance as possible. The objective is simply to keep the ball from getting past with whatever part of the body the player can get in front of it. Some players prefer to block the ball with their chests and absorb the impact. Others like to block with their legs so that the ball will roll up their bodies into their hands. Regardless of method, the players will always try to make themselves as long as possible to block the greatest area.

A penalty throw may be awarded for:

The current (2014–2017) official rules for Goalball may be downloaded from the International Blind Sports Federation website.[6]

Other events include but are not limited to:

USABA Regionals and Nationals for both adults and youth

In 2011, the long-standing IBSA goalball subcommittee sought to separate from IBSA and form a new international body, the World Goalball Association. This was for several reasons. IBSA responded by appointing a new committee.

Professional (seeing) sports teams who tried out goalball include: