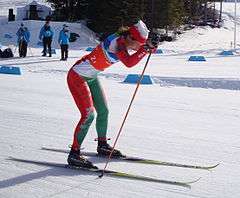 Larysa Varona of Belarus competing at the 2010 Winter Paralympics.

Classification of skiers and events

Paralympic cross-country skiing includes standing events, sitting events (for wheelchair users), and events for visually impaired athletes under the rules of the International Paralympic Committee. These are divided into several categories for people who are missing limbs, have amputations, are blind, or have any other physical disability, to continue their sport. The classifications are for:[1]

IPC events use one of three available start formats: individual timed starts, pursuit with multiple starters, and relay with successive competitors. Relay races may have competitors with a combination of disabilities, each of whom is assigned a handicap according to a "Nordic Percentage System." The percentage is applied to each skier’s final time and the skier with the lowest calculated time is the winner.[2] Olena Iurkovska of Ukraine competing on cross-country sit-skis at the 2010 Winter Paralympics.

Sit-skiers compete in a sitting position using a sit-ski, which has a chair supported with a suspension over a pair of skis that ride in a track; the chair has strapping to secure the skier. Standing skiers use conventional cross-country racing skis, which are of fiberglass-composite construction. Both use poles, when able, to provide propulsion.[3]

According to the IPC, paralympic cross-country skiing was introduced at the 1976 inaugural Winter Paralympics in Örnsköldsvik, Sweden, initially using the classic technique. Skate-skiing was first sanctioned at the Innsbruck 1984 Winter Paralympics and became a "medal race" 1992 in Albertville, France. With the Lillehammer 1994 Winter Paralympics Nordic skiers first competed in the same venue used for the associated Olympic Winter Games.[3]

The history of events has evolved by discipline in the distance categories shown. Note that the four-year cycle changed after 1992 to match the pattern of the Olympic Winter Games.[4]

This article is issued from Wikipedia - version of the 9/17/2015. The text is available under the Creative Commons Attribution/Share Alike but additional terms may apply for the media files.