Pearson PLC is a British multinational publishing and education company headquartered in London. It was founded as a construction business in the 1840s. It shut down its construction activities in the 1920s and switched to publishing. It is the largest education company and the largest book publisher in the world.[2][3] Pearson has a primary listing on the London Stock Exchange and is a constituent of the FTSE 100 Index. It has a secondary listing on the New York Stock Exchange in the form of American Depository Receipts. 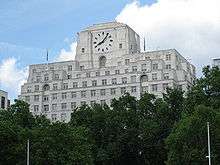 80 Strand (Shell Mex House) in London, the headquarters of Pearson

The company was founded by Samuel Pearson in 1844 as a building and engineering concern operating in Yorkshire under the name S. Pearson & Son.[4] In 1880, control passed to his grandson Weetman Dickinson Pearson, an engineer, who in 1890 moved the business to London and turned it into one of the world's largest construction companies.[4] Another of its prominent engineers was Ernest William Moir who, after working for Pearson on tunnels in New York City, became the contractor's agent on construction of the Blackwall Tunnel under the River Thames in London between 1892 and 1897.[5][6][7] The company also built the Admiralty Harbour at Dover, the Halifax Dry Dock in Canada, the East River Railway Tunnels in New York City, the Mexican Grand Canal that drained Mexico City, the Tehuantepec Railway in Mexico, and railways and harbours around the world.[8][9] In November 1915, the firm began construction of HM Factory, Gretna, the largest cordite factory in the UK during World War I.[10]

In 1919, the firm acquired a 45% stake in the London branch of merchant bankers Lazard Brothers, an interest which was increased to 80% in 1932 during the depression years. Pearson continued to hold a 50% stake until 1999.[13] In 1921, Pearson purchased a number of local daily and weekly newspapers in the United Kingdom, which it combined to form the Westminster Press group.[4]

The company was first listed on the London Stock Exchange in 1969.[4] It went on to buy paperback publisher Penguin in 1970,[4] and in 1972, children's imprint Ladybird Books. In 1986, Pearson invested in the British Satellite Broadcasting consortium, which, a few years later merged with Sky TV to form a new company, British Sky Broadcasting (BSkyB).[14]

During the 1990s, Pearson acquired a number of TV production and broadcasting assets (including former ITV franchisee Thames Television) and sold most of its non-media assets, under the leadership of future U.S. Congressman Bob Turner. Westminster Press was sold to Newsquest in 1996.[15] Pearson acquired the education division of HarperCollins in 1996 from News Corporation [16] and Simon & Schuster in 1998 from Viacom and merged it with its own education unit, Addison-Wesley Longman to form Pearson Education.[17]

Pearson acquired Dorling Kindersley, the illustrated reference publisher and integrated it within Penguin, in March 2000[18] and then bought acquired National Computer Systems (NCS) in September 2000 so entering the educational assessment and school management systems market in the United States.[19]

In 2002, Pearson sold its 22% stake in RTL Group[20] for 1.5 billion Euros, and then purchased Rough Guides, the travel publisher, and brought it under Penguin. Pearson acquired Edexcel,[21] a provider of qualifications in the UK, in 2003 and acquired about 80% stake in Meximerica Media Inc for $16.5 million for the swelling U.S. Hispanic market in 2004.[22]

Pearson purchased a series of other testing and assessment businesses, including Knowledge Technologies in 2004,[23] AGS in 2005,[24] and National Evaluation Systems[25] and Promissor in 2006.[26]

Pearson acquired National Evaluation Systems, a provider of customised state assessments for teacher certification in the US, in April 2006[27] and announced that it had agreed to acquire Harcourt Assessment and Harcourt Education International from Reed Elsevier for $950m in cash in May 2007.[28] Pearson then completed the acquisition of Harcourt Assessment, merging the acquired businesses into Pearson Assessment & Information.[29] Pearson also acquired eCollege, a digital learning technology group for $477m in May 2007.[30]

In February 2008, Pearson announced the sale of its Pearson Data Management Division (formerly the scanner manufacturing and servicing division of NCS Inc.) to Scantron Corporation (part of M&F Worldwide) which had been its main competitor.[31]

Pearson acquired Wall Street English for $145m in 2009[32] and bought the school learning systems division of Sistema Educacional Brasileiro (SEB) for $497m in 2010.[33] Also in 2010, Pearson sold its 61% stake in Interactive Data to investment funds managed by Silver Lake Partners and Warburg Pincus for $2 billion.[34]

In July 2011, Pearson announced the creation of Pearson College, a British degree provider based in London.[35][36] Also in 2011, Pearson acquired Connections Education and agreed to sell its 50% stake in FTSE International Limited to the London Stock Exchange for £450 million.[37] In 2011, Pearson also increased its stake in TutorVista, such that it had a 76% stake, for $127 million.[38]

Pearson entered into talks with rival conglomerate Bertelsmann, over the possibility of combining their respective publishing companies, Penguin Group and Random House in October 2012. The houses are considered two of the "Big Six" publishing companies.[39] On 29 October 2012, Pearson said it would merge Penguin Books with Bertelsmann's Random House to create the world's biggest consumer book publisher.[40] Then in May 2012 Pearson announced its acquisition of GlobalEnglish Corporation, an American Business English software and solutions company, in an all-cash transaction.[41]

In May 2013, Pearson announced a new restructuring plan to invest in digital learning and emerging markets, after predicting weaker earnings.[42]

Pearson announced on 23 July 2015 that it had agreed to sell the FT Group, which includes business daily Financial Times, to Japanese media group Nikkei for £844 million, or $1.32 billion. The sale does not include FT Group's London property at One Southwark Bridge.[45] In August 2015, Pearson's sold its 50% stake in The Economist to the Agnelli family for £469 million[46] who previously held 4.7% of the group.[47] The remaining 50% of The Economist Group is owned by the Schroders, Cadburys and the Rothschilds.[47]

Pearson is now organised into three main business groupings: Pearson School, Pearson Higher Education and Pearson Professional (includes Pearson English). In 2011 Pearson generated total revenues of £5.9 billion, of which £4,390 million were from Pearson Education, £1,045 million from Penguin Group, and £427 million from Financial Times Group, since sold.[50] In 2011, 60% of Pearson's revenues were generated in North America, 23% in Europe, 11% in Asia, and 6% in the rest of the world.[50]

Pearson School was created when the School businesses from Pearson International and Pearson North America were merged in 2013. They provide textbooks and digital technologies to teachers and students across school ages. Pearson's school brands include BTEC, Bug Club, Edexcel, Fronter, GradPoint, Schoolnet, and SuccessNet...

Pearson English provides textbooks, digital technologies and education services to teachers and students across English-language learning. Pearson English is made up of:

Pearson VUE is a provider in electronic testing for regulatory and certification boards. It delivers certification testing in over 150 countries. It is the world leader in computer based assessment testing.

The Financial Times (FT Group) formed part of this Pearson division until it was sold to Nikkei.

Concerns exist around the amount of influence Pearson, a commercial company, has on public education.[51] Other concerns are around tax avoidance, the high value contracts, and in one instance, laying off teachers to offset the high costs of testing.[52]

Pearson owns Edexcel, an education and examination board.[53] Edexcel has produced qualifications which link to Pearson texts, although Edexcel also continues to endorse textbooks published by other companies.[21]

In June 2010, Pearson Plc received notification that the Libyan Investment Authority (LIA) founded by Muammar Gaddafi's son Saif al-Islam Gaddafi as a sovereign fund, had acquired 24,431,000 shares within the company via Euroclear. On further investigation, Pearson said the LIA may have acquired an additional 2,141,179 shares, resulting in a total interest of 26,572,179 shares. At the time, this represented a major holding of 3.27% within the company and the investment was worth around £280 million.[54]

Pearson has been criticised for using offshore tax avoidance schemes involving a host of companies at a service address in Luxembourg.[55]