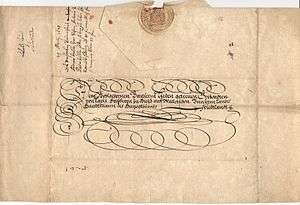 Pre-stamp 1628 lettersheet opened up showing folds, address and seal, with letter being written on the obverse

Postal history is the study of postal systems and how they operate and, or, the study of the use of postage stamps and covers and associated postal artifacts illustrating historical episodes in the development of postal systems. The term is attributed to Robson Lowe, a professional philatelist, stamp dealer and stamp auctioneer, who made the first organised study of the subject in the 1930s and described philatelists as "students of science", but postal historians as "students of humanity".[1] More precisely, philatelists describe postal history as the study of rates, routes, markings, and means (of transport).

Postal history has become a philatelic collecting speciality in its own right. Whereas traditional philately is concerned with the study of the stamps per se, including the technical aspects of stamp production and distribution, philatelic postal history refers to stamps as historical documents; similarly re postmarks, postcards, envelopes and the letters they contain. Postal history can include the study of postal rates, postal policy, postal administration, political effects on postal systems, postal surveillance and the consequences of politics, business, and culture on postal systems; basically anything to do with the function of the collection, transportation and delivery of mail. The specialized area of philatelic history defines postal history as the study of rates charged for postal services provided, routes followed and special handling of letters. Areas of special interest include disrupted or transitional periods, such as wars and military occupations, and mail to remote areas.

The philatelic-based definition of the term developed as the discipline developed. Philatelic students discovered that understanding and authentication of stamps depended on knowing why postal authorities issued particular stamps, where they were used and how. For instance, a stamp apparently used before any other stamp of its type could be proved a forgery if it was postmarked at a location known not to have received any stamps until a later date.

Much information is still not known about the workings of postal systems, and millions of old covers have survived, constituting a rich field of "artifacts" for analysis.

In studying or collecting any postal history subject some overlap is inevitable because it is impossible to separate the different areas that affect the mail from one another; transportation, rates, geography and subject are all intertwined, but the emphasis remains different depending on the chosen topic. The postal history topics described below are some of the better known and popular topics.

The era for a geographical based study can add dimension depending on the services available or the changes that took place. The period should seek to tell a complete story and not limit the chosen topic.

First flight cover for Nassau to Miami airmail route in 1929

Zeppelin mail from Gibraltar to Rio de Janeiro, Brazil via Berlin on the Christmas flight (12th South American flight) of 1934

Bavarian postal stationery postcard used from Nuremberg to Munich in 1895