This article is about the Indian film actor. For other uses, see Pran (disambiguation).

Pran has received numerous awards and honours in his career. He won the Filmfare Best Supporting Actor Award in 1967, 1969 and 1972 and was awarded the Filmfare Lifetime Achievement Award in 1997. He was awarded as the 'Villain of the Millennium' by Stardust in 2000.[2] The Government of India honoured him with the Padma Bhushan in 2001[3] for his contributions to the arts. He was honoured in 2013 with the Dadasaheb Phalke Award, the highest national award for cinema artists, by the Government of India. In 2010, he was named on the list of CNN's Top 25 Asian actors of all time.[4][5]

He died on 12 July 2013 at the age of 93 of pneumonia after suffering from a prolonged illness in Mumbai's Lilavati Hospital.[6]

Pran was born on 12 February 1920 in Ballimaran, Kotgarh Old Delhi,[7] into a wealthy Punjabi family. His father, Kewal Krishan Sikand, was a civil engineer and a government civil contractor; his mother was Rameshwari. Pran was one among their seven children, being four sons and three daughters.[8]

Pran was academically gifted, especially in mathematics. His father had a transferable job, and so Pran studied in various places, including Dehradun, Kapurthala, Meerut and Unnao (Uttar Pradesh), finally completing his matriculation from Hamid School, in Rampur (U.P.). Thereafter, he joined A. Das & Co., Delhi as an apprentice as to become a professional photographer. He travelled to Shimla and played the role of Sita in a local staging of "Ramlila". Madan Puri enacted the role of Rama in this play.[9]

Pran got his first role in Dalsukh M. Pancholi's Punjabi film Yamla Jat (1940) because of an accidental meeting with writer Wali Mohammad Wali at a shop in Lahore.[10] Directed by Moti B. Gidwani, the film featured Noor Jehan and Durga Khote. This was followed by small roles in the film Chaudhary and Khajanchi, both in 1941. Pancholi cast him again in Khandaan (1942), which was Pran's first Hindi film. The film featured him as romantic hero, opposite Noor Jehan, who had acted with him in Yamla Jat as a child artist.[11][12][13] In Khandaan, she was less than 15 years old and compensated for the difference in their heights in close-up shots in the film by standing on the top of bricks.[14] In the pre-partition era, director Gidwani cast Pran in more films like Kaise Kahoon (1945) and Khamosh Nigahen (1946).

Pran had acted in 22 films from 1942–46 in Lahore, of which 18 were released by 1947. Due to India's partition in 1947, his film career had a brief break during this time. While his films from 1944–47 were all made in undivided India, but Taraash (1951) and Khanabadosh (1952), both co-starring Manorama, were released only in Pakistan after Partition. He left Lahore and arrived in Bombay. For a few months, he kept looking for acting opportunities while doing other jobs. He worked in Delmar Hotel, Marine Drive for eight months, after which he got a chance to act in 1948. Because of help from writer Saadat Hasan Manto and actor Shyam, he got a role in the Bombay Talkies' film, Ziddi which starred Dev Anand and Kamini Kaushal in the lead and was directed by Shaheed Latif. The movie launched Pran's career in Bombay. Incidentally, it also proved to be Dev Anand's big break as a hero[8][15] By 1950 he was gradually established as a premier villain in Hindi cinema. Within a week of Ziddi's success, he had signed three more films; S M Yusuf's Grihasti (1948), which became a diamond jubilee hit, Prabhat Films's Apradhi (1949) and Wali Mohammad's Putli (1949). By then, Wali Mohammad, who was responsible for Pran's first role, had come to Bombay and became a producer, setting up an office at Famous Studios, near Mahalaxmi Racecourse.[16][17] In the 1940s, romantic duets featuring him, like the songs "Tere Naaz Uthane Ko Jee Chahta Hai" from Grihasti opposite Shardha and from Khandaan (1942) with Noor Jehan, became popular in the 1940s. The way he expressed his dialogues in films like Sheesh Mahal (1950), a series of disguises he made in Adalat (1958) and the rapport he shared with vamps like Kuldip Kaur in Jashan (1955) showcased his versatility in the 1950s.

As a villain, Pran's initial successful films were Ziddi and Bari Behan (1949). Pran's trademark blowing of smoke rings first appeared in the latter film.[18] He was regularly offered the role of the main villain or of negative character in the films with Dilip Kumar, Dev Anand and Raj Kapoor as the lead hero in the 1950s and 60s. From the 1950s directors like M. V. Raman, Nanabhai Bhatt, Kalidas, Ravindra Dave, I. S. Johar, Bimal Roy repeatedly cast him in different roles in their many films. Similarly in the sixties, he was frequent in the directorial ventures of A. Bhim Singh, Shakti Samanta, Bhappi Sonie, K. Amarnath, Nasir Hussain and others. In the 1970s, new younger directors and producers cast him in their films even though Pran asked for the highest price among supporting actors from 1968–1982.[19]

In the late 1960s, Pran played Malang Chacha, a veteran war hero, in Manoj Kumar's film Upkar (1967). The Kalyanji Anandji song, "Kasme Waade Pyaar Wafaa" was picturised on him in this film. In this film, Pran played a more sympathetic role than previously. He also received his first Filmfare Award for Upkar. Kumar continued to cast him in pivotal roles in films such as Purab Aur Paschim (1970), Be-Imaan (1972), Sanyasi (1975) and Dus Numbri (1976). From 1967 onwards he also acted in Bengali films, beginning with Ashim Banerjee's Sonai Dighe, where Joy Mukherjee was the hero.[23]

He also produced the movie Lakshmanrekha in 1991,the only movie he produced in his whole Bollywood career and even played the role of Kishan Lal Sharma in movie.[28]

At the age of 78, Pran suffered a heart attack in 1998,[29] after which he started rejecting film offers due to age-related problems. But in the 1990s, Amitabh Bachchan requested Pran to do roles in his home productions Tere Mere Sapne (1996) Mrityudata (1997) and Pran made an exception by acting in them to help Bachchan through a difficult time in his career. In 1997, his character in Mrityudaata was modified to compensate for Pran's shivering legs in real life and in Tere Mere Sapne, his shots were taken with him being seated. Post 2000, he made few guest appearances.[23]

Pran had a marathon six-decade career in Hindi cinema and is one of the most celebrated actors of the industry. His acting is said to have been effective enough to desist people naming their children 'Pran' because of his negative roles,[22] while the industry had started calling him 'Pran Sahab'.[30] His favourite line "Barkhurdaar" became immensely popular.

Pran married Shukla Ahluwalia in 1945 and has two sons, Arvind and Sunil Sikand and a daughter, Pinky.[7] He was treated at the Lilavati Hospital and died on 12 July 2013, at 8:30 p.m. He had been admitted to hospital a few times in the last few months for his deteriorating health, at some point he was battling pneumonia.[33] Consequently, he could not attend the 60th National Film Awards in May 2013 where he was to be presented the Dadasaheb Phalke Award. Instead, Information and broadcasting minister Manish Tewari presented the award at Pran's home in Mumbai. Pran's death was widely noted by statesmen and his fellow entertainers.[34] Prime Minister Manmohan Singh paid his condolences on his death and called him "an icon".[35] Veteran actor Amitabh Bachchan tweeted his feelings about his death calling him a "magnificent pillar" of the film industry.[36]

Pran has been honoured with numerous awards for his portrayal of both negative and character roles. He has received three Filmfare Awards in the Best Supporting Actor category for Upkar, Aansoo Ban Gaye Phool and Be-Imaan. However, in 1973 when he was awarded for his role of constable Ram Singh in Be-Imaan, he refused to accept the award stating that the Filmfare Award for Best Music Director should have gone to Ghulam Mohammed for Pakeezah and not to the musical duo Shankar Jaikishan for Be-imaan.[37][38] He also has been awarded with three Bengal Film Journalists' Association Awards for his supporting roles.

For his vast contributions to Indian cinema, Pran has been honoured several Lifetime Achievement awards; including those of Filmfare, Star Screen Awards and Zee Cine Awards. In 2001, the Government of India conferred the Padma Bhushan on him. Recently in April 2013, he was announced to be the winner of the Dadasaheb Phalke Award, the most prestigious award of the Indian cinema, presented by the Government of India. The award was presented to him at the 60th National Film Awards for his lifetime of work in the film industry.[39] Various celebrities had congratulated him on this occasion with Amitabh Bachchan calling him "a large pillar of the Indian Film Industry" on his Twitter feed.[40] He was also the contender of the award for the previous year along with Manoj Kumar and Vyjayanthimala, but Soumitra Chatterjee had been chosen as the awardee.[41]

Other awards and recognitions 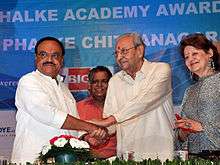 Pran being felicitated by the then Deputy Chief Minister of Maharashtra Chhagan Bhujbal (left) at the Dadasaheb Phalke Academy Awards in 2010.