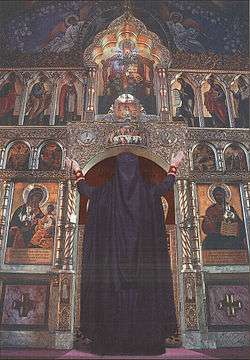 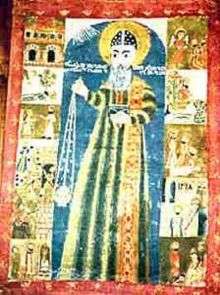 The Prayer of Saint Ephrem (Greek: Εὐχἠ τοῦ Ὁσίου Ἐφραίμ, Euchē tou Hosiou Ephraim), is a prayer attributed to Saint Ephrem the Syrian and used during the Great Lent by the Eastern Orthodox and Byzantine Catholic Churches. In the Byzantine tradition, this prayer is considered to be the most succinct summation of the spirit of Great Lent and is hence the Lenten prayer par excellence, prayed during all Lenten weekday services. There are historically two versions of the prayer - the Greek and the Slavonic, with modern English translations taken either from the Greek, the Slavonic, or attempting to combine the two. As Ephrem wrote solely in Syriac, it is almost certain that it was not written by him. However, the Prayer of Saint Ephrem appears to belong to the large body of Greek penitential and ascetic literature that was composed in Ephrem's name during the century after his death in 373.

In English, this is:

O Lord and Master of my life, give me not the spirit of sloth, meddling, lust for power and idle talk.

But grant unto me, Thy servant, a spirit of chastity (integrity), humility, patience and love.

Yea, O Lord and King, grant me to see mine own faults and not to judge my brother. For blessed art Thou unto the ages of ages. Amen.

This Greek version is the standard form of the prayer, to be found in the Greek Orthodox Church and all those churches that utilise Greek or Arabic in their services. Minor variations from this text have been found in very early manuscripts.

In the earliest Church Slavonic translations, this is:

In English, this is:

O Lord and Master of my life, take from me the spirit of sloth, despondency, lust for power and idle talk.

But grant unto me, Thy servant, a spirit of chastity (integrity), humility, patience and love.

Yea, O Lord and King, grant me to see mine own faults and not to judge my brother. For blessed art Thou unto the ages. Amen.

There are two intriguing differences between the Greek and Slavonic texts of the first line of the prayer.

First, regarding the spirit of sloth..., the Greek has μή μοι δῷς meaning give me not, but the Slavonic has ωтжεни ωт мεнε meaning take away from me. Next, where the Greek has περιέργια (periergia) meaning 'idle curiosity’ or 'meddling', the Slavonic has небрежεнїѧ (nebrezheniya) meaning ‘faint-heartedness’ or 'despondency', which in Greek is ακηδία (akêdia), the classic monastic sin. Whether these differences are attributable to a different original or a reflection of differing national temperaments is, as yet, unclear.

This version was superseded in Russia in 1656 by the liturgical reforms of Patriarch Nikon, but remains in use among the Old Believers today.

In the Orthodox Church in America, the version in use is:

O Lord and Master of my life, take from me the spirit of sloth, despair, lust of power, and idle talk. But give rather the spirit of chastity, humility, patience, and love to Thy servant. Yea, O Lord and King, grant me to see my own transgressions, and not to judge my brother, for blessed art Thou, unto ages of ages. Amen.

This version is to be found in the Liturgicon (Sluzhebnik) or Priest's Service Book, published in Kiev in 1639 by St. Peter Mohyla. Substantially it is similar to the earlier version, but with some of the case-endings updated, as by that time, use of the dative case (животѹ моемѹ) to mark possession was considered distinctively archaic, and use of the genitive case (живота моегω) felt to be more correct. It retains the distinctive differences that the earlier version has from the Greek, with none of the more drastic changes that may be found in the next version.

At weekday lenten services the prayer is prescribed for each of canonical hours (usually near the end of the service) and twice during the Liturgy of the Presanctified Gifts.

During the period of the triodion it is first recited on the Wednesday and Friday of Cheesefare week[3] and thereafter from vespers on the evening of the Sunday of Forgiveness, the service which begins great lent, on Monday through Friday through Wednesday of Holy Week.

During the Nativity Fast, Dormition Fast and the Apostles' Fast, the lenten order of services may be used when the divine liturgy is not celebrated;[3] in such an instance, the Prayer of St. Ephraim is recited then, too.

The prayer is accompanied by bows and prostrations.

Depending upon the rubrics, the prayer is said either once or twice:

The current Russian Orthodox practice, such as in ROCOR and the Moscow Patriarchate, is to perform twelve metanias (bows from the waist) between the repeats of the prayer, saying at each bow, 'Боже, ѡчисти мѧ грѣшнаго (грѣшнѹю if one is female) - "O God, cleanse me a sinner". When the prayer is prayed in the course of a church service, the priest alone says "O God, cleanse me a sinner" as everyone makes bows. In the common usage of ROCOR, the last (twelfth time) he adds, "...и помилѹй мѧ" - "...and have mercy on me." Though this last addition is not written in the service books, it does help all of those present to know that it was the last bow.

The tradition of the Old Believers is similar, but instead of twelve bows in silence, they have thirteen prostrations, each time reciting the Jesus Prayer or the following prayers:

In the Cyrillic orthography:

In the Latin orthography:

The Ukrainian version appears to follow the Mohyla version closely.