Productivity software (sometimes called personal productivity software or office productivity software[1]) is application software dedicated to producing information, such as documents, presentations, worksheets, databases, charts, graphs, digital paintings, electronic music and digital video.[2] Its names arose from the fact that it increases productivity, especially of individual office workers, from typists to knowledge workers, although its scope is now wider than that. Office suites, which brought word processing, spreadsheet, and relational database programs to the desktop in the 1980s, are the core example of productivity software. They revolutionized the office with the magnitude of the productivity increase they brought as compared with the pre-1980s office environments of typewriters, paper filing, and handwritten lists and ledgers. Some 78% of "middle-skill" occupations (those that call for more than a high school diploma but less than a bachelor's degree) now require the use of productivity software. [3]In the 2010s, productivity software has become even more consumerized than it already was, as computing becomes ever more integrated into daily personal life. 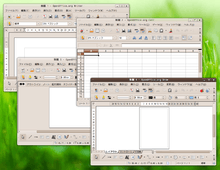 An office suite is a collection of bundled productivity software (a software suite) intended to be used by knowledge workers. The components are generally distributed together, have a consistent user interface and usually can interact with each other, sometimes in ways that the operating system would not normally allow.[4]

The earliest office suite for personal computers was Starburst in the early 1980s, comprising the word processor WordStar, together with companion apps CalcStar (spreadsheet) and DataStar (database).[5] Various other suites arose in the 1980s, and over the course of the 1990s Microsoft Office came to dominate the market,[6] a position it retains as of 2016.

Existing office suites contain wide range of various components. Most typically, the base components include:

Other components of office suites include: