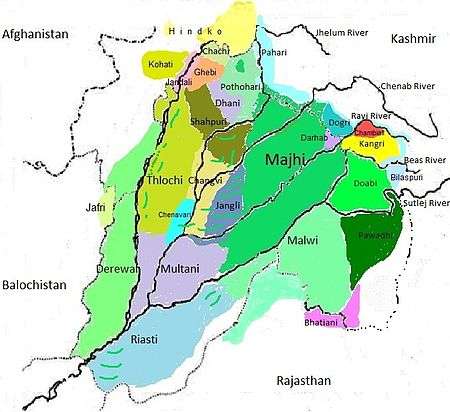 Dialects of Punjabi are spoken by 60% of the population in Pakistan, as well as by a majority in Punjab state of India.

In India, the major dialects are Majhi, Doabi, Malwai, and Powadhi. In Pakistan, they are Pothohari, Lahndi, and Multani.[1] Majhi is the standard in both countries.

Majhi is Punjabi's prestige dialect because it is standard of written Punjabi. It is spoken in the heart of Punjab in historical region of Majha which spans the Lahore, Sheikhupura, Kasur, Okara, Nankana Sahib, Faisalabad, Gujranwala, Wazirabad, Sialkot, Narowal, Gujrat, Jhelum, Pakpattan, Vehari, Khanewal, Sahiwal, Hafizabad, Mandi Bahauddin and Chiniot districts of Pakistan's Punjab Province along with some major cities.

In India Amritsar, Tarn Taran Sahib, and Gurdaspur Districts of the State of Punjab and sizable population also in major cities of the States of Punjab, Haryana, Uttar Pradesh, Delhi and Mumbai India.

Malwai is spoken in the eastern part of Indian Punjab and also in Bahawalnagar and Vehari districts of Pakistan. Main areas are Ludhiana, Patiala, Ambala, Bathinda, Ganganagar, Malerkotla, Fazilka, Ferozepur, Moga. Malwa is the southern and central part of present-day Indian Punjab. It also includes the Punjabi speaking northern areas of Haryana, viz. Ambala, Hissar, Sirsa, Kurukshetra etc. Not to be confused with the Malvi language, which shares its name.

Doabi is spoken in both the Indian Punjab as well as parts of Pakistan Punjab owing to post-1947 migration of Muslim populace from East Punjab. The word "Do Aabi" means "the land between two rivers" and this dialect was historically spoken between the rivers of the Beas and the Sutlej in the region called Doaba. Regions it is presently spoken includes the Jalandhar and Kapurthala districts in Indian Punjab, specifically in the areas known as the Dona and Manjki, as well as the Toba Tek Singh and Faisalabad districts in Pakistan Punjab where the dialect is known as Faisalabadi Punjabi.

Pwadhi, Powadh, Puadh or Powadha is a region of Punjab and parts of Haryana between the Satluj and Ghaggar rivers. The part lying south, south-east and east of Rupnagar adjacent to Ambala District (Haryana) is Powadhi. The Powadh extends from that part of the Rupnagar District which lies near Satluj to beyond the Ghaggar river in the east up to Kala Amb, which is at the border of the states of Himachal pradesh and Haryana. Parts of Fatehgarh Sahib district, and parts of Patiala districts like Rajpura are also part of Powadh. The language is spoken over a large area in present Punjab as well as Haryana. In Punjab, Kharar, Kurali, Ropar, Nurpurbedi, Morinda, Pail, Rajpura and Samrala are the areas where the Puadhi is spoken and the dialect area also includes Pinjore, Kalka, Ismailabad, Pehowa to Bangar area in Fatehabad district.

Western Punjabi or Lahnda are those Indo-Aryan varieties in parts of Pakistani Punjab that are transitional between Eastern Punjabi and Sindhi. The literary language of Lahnda speakers has traditionally been Standard Punjabi.[2]

Shahpuri dialect (also known as Sargodha dialect) is mostly spoken in Pakistani Punjab. Its name is derived from former Shahpur District (now Shahpur Tehsil, being part of Sargodha District). It is spoken throughout a widespread area, spoken in Sargodha and Khushab Districts and also spoken in neighbouring Mianwali and Bhakkar Districts. It is mainly spoken on western end of Sindh River to Chennab river crossing Jehlam river.[3]

Jhangochi (جھنگوچی) dialect is spoken in Pakistani Punjab throughout a widespread area, starting from Khanewal and Jhang at both ends of Ravi and Chenab to Hafizabad district.

Jangli is a dialect of former nomad tribes of areas whose names are often suffixed with 'Bar' derived from jungle bar before irrigation system arrived in the start of the 20th century, for example, Sandal Bar, Kirana Bar, Neeli Bar, Ganji Bar. Former Layllpur and western half of Montgomary district used to speak this dialect. Currently area includes Faisalabad, Chiniot, Sahiwal, Toba Tek Singh, Bahawalnagar districts in Pakistani Punjab. Rachnavi and Dibhari are alternate names of this dialect.

Pothohari is spoken in north Pakistani Punjab and Azad Kashmir. The area where it is spoken extends in the north from Muzaffarabad to as far south as Jhelum, Gujar Khan, Rawat and Rawalpindi, Murree Hills north of Rawalpindi, and east to Bhimber and Rawalakot. Chibhali and Dhundi-Kairali dialects may be related. It is in a dialect chain with Majhi and Hindko dialects of Punjabi.

The diverse dialects of the furthest nortwestern areas of "Greater Punjabi" are known as Hindko. The central Hindko dialects comprise Ghebi, Awankari, Chacchi and Kohati. Peshawari, the divergent dialect spoken to the northwest in Peshawar, has been used as a basis for a literary language. The dialect of the Hazara region to the northeast forms a dialect group of its own known as Northern Hindko or Kagani.

Ghebi is quite similar to the Potowari dialect, but differs slightly, for example in the past tense, in which it uses (ahay+prefix) for 'was'. For example, "Mea ahayaan" means "I was". It also uses "Vinjna" instead of "jaana" or "gchna" for "going". It is mostly spoken in Fateh Jang Tehsil and Pindi Gheb Tehsil in Pakistani Punjab.

It is also called Rohi. It is mostly spoken in Jand Tehsil and Mianwali district in Pakistani Punjab.

Spoken in parts of Rawalpindi Division (Pothohar) of Pakistani Punjab. Its name is derived from Dhan valley where its spoken. It is spoken in Chakwal,[4] parts of Jehlam Districts and Attock Districts. The people of Pothohar speak Pothohari dialect. However, the people of Chakwal or the Dhanni area in particular do not speak Pothohari and are ethnologically not regarded as Potoharis. They speak a distinctive Chakwali or Dhanni dialect of Punjabi, which is closer to Shahpuri, a dialect spoken in the Shahpur-Salt Range area.[3]

These are a form of Derawali very strongly influenced by baluchi and sindhi languages, spoken in Musakhel and Barkhan, districts of Pakistani Province Balochistan respectively. Khetrani may not actually be a Lahnda language, but Dardic.

West of Chenaab river in Jhang district of Pakistani Punjab the dialect of Jhangochi merges with Thalochi and resultant dialect is Chenavari. Name is derived from Chenaab river.

The emergent language of the southern parts of Punjab is Saraiki. Its standard is based on the central dialect of Multani. Other dialects that are commonly associated with it are Riasti (also known as Bahawalpuri or Choolistani) to the south and Thali (or Thalochri) to the northwest. The varieties of Multani and Thali spoken in the west along the boundary with Pashto are also known as Derawali.

There are several dialects all cited in the dialect link. Note as the language is spreading with immigration throughout the world variations on the exported dialects of the immigrants mixed with local languages are now emerging where Punjabi has managed to sustain itself. For example, in the UK and North America English words and grammar have begun infiltrating Punjabi spoken there as has Swahili in Kenya. The effect of this is a myriad of Diaspora Creole variations that deviate from the source language somewhat like Spanish and French have in Latin America and North America.