Punnagai Mannan (English: King of Smiles) is a 1986 Indian Tamil-language romantic-drama film directed by K. Balachander. Starring Kamal Haasan and Revathi in the lead roles, the film is Haasan's 25th film with Balachander. Coincidentally, it is music director Ilaiyaraaja's last film with lyricist Vairamuthu.[2][3] The film was dubbed into Telugu as Dance Master.[4] The film was later dubbed into Hindi as Cha Cha Charlee in 1996. This was Revathi's last tamil film before her marriage to cinematographer Suresh Chandra Menon in 1986. 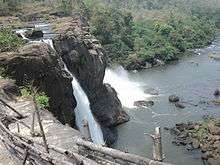 The film was shot at Athirappily Falls

Sethu (Kamal Haasan) and Ranjani (Rekha) arrive at a cliff where they plan to commit suicide due to the pressure put up by Ranjani's parents against their marriage. Sethu who is the son of an ordinary drunkard cook (Delhi Ganesh) and is also a dancer is not accepted as groom for Ranjani by her parents. The parents threaten Ranjani that either they would kill Sethu or commit suicide. While jumping from the cliff, Sethu accidentally gets trapped in a tree and escapes but Ranjani dies. Despite the attempts made by Ranjani's father to jail Sethu by framing a fault case that Sethu killed Ranjani, no strong evidence was there to prove it. Sethu is jailed for the offence of attempted suicide for one year.

After a year, Sethu is released. Padmini (Srividya) who owns a dance school provides him a job of dance master as he is the former student. Sethu visits regularly the cliff as a remembrance of his love. On his way he sees a girl who attempts suicide for her failure in examination and he stops her. He again meets the girl in a gallery. The girl introduces herself to him as Malini (Revathi) but he ignores her. Malini again meets Sethu at a tourist spot where she clicks photos without his knowledge, but Sethu finds out and destroys her camera. Malini chases him to his dance school as his student. Sethu repeatedly insults her but Malini develops a love for him.

Malini coincidentally meets "Chaplin" Chellapa, uncle of Sethu who dressed himself like Charlie Chaplin and makes people laugh. She comes to know about Sethu's failed love from him, which increases her affection towards Sethu. Chellapa helps her to win Sethu's heart. Malini is actually a Sinhalese girl because of which she faces trouble from her class mate many times and every time rescued by Sethu. Sethu though humiliates her all the time develops a soft corner in his mind. Sethu could realise that he had started to love her but gets confused what to do as he is a failed one. Sethu's repeated attempts to prevent himself loving Malini fails and he takes a sign of blessing for his new love from Ranjani at the cliff side. He finally confesses his love for her and proposes to her.

Malini continues to spend time with Chellapa as she enjoys his sense of humour. This makes Sethu jealous, so he attempts to mimic Chaplin Chellapa's mannerisms — but ends up having an accident. Sethu finds that Chellapa is a failed lover, who to forget his past has worn a mask of Chaplin. Sethu and Malini unite Chellapa and Padmini who is a spinster. Sethu again faces pressure from Malini's father as Malini is of Sinhalese origin and Sethu is a Tamilian. Both of them struggle hard to win in their love. Malini goes to the extent of escaping from Sri Lanka to Tamil Nadu to join with Sethu. After understanding the tight bond of Malini with Sethu, Malini's father approves their marriage.

Ranjani's father, who hears about Sethu's marriage, wants to take "revenge" for his daughter's death. On the day of Sethu's engagement, he gives a basket full of apples which has a time bomb in it to Sethu's father pretending to be his gift for his son. Sethu's father who does not know about the bomb keeps the basket in Chaplin Chellapa's car. Sethu and Malini starts to visit Sethu's love cliff in Chellapa's car which has the bomb. Sethu's father and Chellapa who come to know about this, start chasing them to stop but in vain. The bomb explodes at the same place where Sethu-Ranjani attempted suicide and Sethu-Malini die in the explosion, leaving Chellapa and Sethu's father heartbroken. Chellapa later showers flowers in the place where the three of them died.

The title of the film was inspired from a song of same name from the film Iru Kodugal also directed by K. Balachander. According to Balachander, Punnagai Mannan "was a contrast to Ek Duje... It was in response to people who argued why lovers should commit suicide."[5] Shooting for Punnagai Mannan took place in Athirappilly Falls, Kerala.[6] The film also featured a kissing scene between Kamal Haasan and Rekha, which earned much criticism.[7][8] Ramesh Aravind was featured as flashback lover for Revathi in the film but his role was ultimately edited out from the film.[9][10] Balachander suggested Kala as a choreographer to fill in for the busy Raghuram, her brother-in-law.[11] Suresh Krissna who worked as one of the assistants for the film recalled that regarding the picturisation of the song "Mamavukku", Kamal came up with the novel idea of lip sync being perfect while dance movements being fast. Suresh later used this idea in one of the song sequences in his film Annamalai (1992).[12]

Music is composed by Ilaiyaraaja, with lyrics by Vairamuthu.[13] A. R. Rahman (then known as Dileep), who then worked with Ilayaraja as a guitarist, played keyboard for this album and because it was the first time a Tamil film used a sequencer, the music became informally known as "computer music" in Tamil Nadu.[14] Despite the album's success, Ilaiyaraaja and Vairamuthu parted ways later.[2][3] Ilayaraja's son Karthik Raja recalled that CX5M system was used around the time of the making of the film.[15] Vairamuthu praised Balachander for the song "Enna Satham" stating that he had the guts to insert a song in a sequence where two lovers were going to die.[16] In May 2015, the FM radio station, Radio City, commemorated Ilaiyaraaja's 72nd birthday by broadcasting the composer's songs in a special show titled Raja Rajathan for 91 days. "Enna Satham" was one of the most requested songs on the show.[17]

Prior to release, Punnagai Mannan was given an "A" (Adults Only) rating from the Central Board of Film Certification.[18] The film was released on 1 November 1986, coinciding with Diwali Day. It was released alongside Rajinikanth's Maaveeran, and was a Superhit at the box office. The film successfully ran in theatres for 25 weeks. On the film's 25th week celebrations, Kamal Haasan was given the title Puratchi Mannan ("Revolutionary King") by his "mentor" K. Balachander.[19]

In February 2013, entertainment magazine Galatta Cinema said, While Kamal and Revathy do a fab job, it's Ilayaraaja's music that plays a key character in bringing their love even closer to us..."[20] Indiaglitz described it as a path breaker and also went on to say that Love is beyond past, future, history, sorrow, background and age.[21] Behindwoods included the film in its list "Top 20 Best Love Stories in Tamil" stating that it is "an ode to love".[22]