For other uses, see Qazvin (disambiguation).

Qazvin (/kæzˈviːn/; Persian: قزوین‎‎, IPA: [ɢæzˈviːn], also Romanized as Qazvīn, Caspin, Qazwin, or Ghazvin) is the largest city and capital of the Province of Qazvin in Iran. Qazvin was an ancient capital in the Persian Empire and nowadays is known as the calligraphy capital of Iran. It is famous for its Baghlava, carpet patterns, poets, political newspaper and pahlavi (Middle Persian) influence on its accent. At the 2011 census, its population was 381,598.[1]

Located in 150 km (93 mi) northwest of Tehran, in the Qazvin Province, it is at an altitude of about 1,800 m (5,900 ft) above sea level. The climate is cold but dry, due to its position south of the rugged Alborz range called KTS Atabakiya. 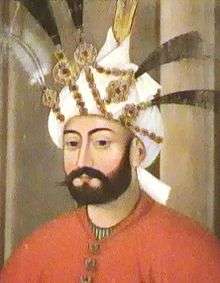 The city was a former capital of the Persian Empire under Safavids.[2] It is a provincial capital today that has been an important cultural center throughout history.

Archeological findings in the Qazvin plain reveal urban agricultural settlements for at least nine millennia. Qazvin geographically connects Tehran, Isfahan, and the Persian Gulf to the Caspian seacoast and Asia Minor, hence its strategic location throughout the ages.

The city today known as Qazvin is thought to have been founded by Shapur II, King of Persia in 250 CE, under the name Shad Shahpur (shad can be read as 'happy'), when he built a fortification there to control regional tensions.

Qazvin has sometimes been of central importance at major moments of Iranian history. It was captured by invading Arabs (644 AD) and destroyed by Hulagu Khan (13th century). After the Ottoman capture of Tabriz, Shah Tahmasp (1524–1576) made Qazvin the capital of the Safavid empire (founded in 1501 AD), a status that Qazvin retained for half a century until Shah Abbas I moved the capital to Isfahan.[2]

In 1210 the city was conquered and sacked by the forces of Kingdom of Georgia sent by Tamar the Great, as per the retribution for destroying Georgian-controlled Ani by the Muslim forces that left 12,000 Christians dead.[3][4]

In the 19th century Qazin flourished as a center of trade because the only all-year accessible road from the Caspian Sea to the Highland started here and with enhanced traffic on the Caspian Sea the trade volume grew. Its bazaars were enlarged.[5] In the middle of the century the Babi movement had one of its centers here and the first massacre of Babis occurred in Qazvin in 1847.[6]

In the second half of the 19th century Qazvin was one of the centers of Russian presence in northern Iran. A detachment of the Persian Cossack Brigade under Russian officers was stationed here. From 1893 this was the headquarters of the Russian Company for Road construction in Persia which connected Qazvin by roads to Tehran and Hamadan. The company built a hospital and the St. Nicolas Church.

In 1920 Qazvin was used as a base for the British Norperforce.[7] The 1921 Persian coup d'état that led to the rise of the Pahlavi dynasty was launched from Qazvin.

In Autumn 2015 portions of Qazvin were struck by a meteorite.[8]

Qazvin contains several archeological excavations. In the middle of the city lie the ruins of Meimoon Ghal'eh, one of several Sassanid edifices in the area.

Qazvin contains several buildings from the Safavid era, dating to the period in which it was capital of Persia. Perhaps the most famous of the surviving edifices is the Chehelsotoon (Kolah Farangi) mansion, today a museum in central Qazvin. 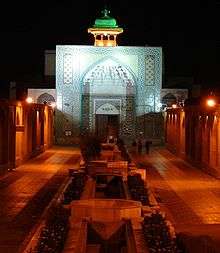 After Islam, the popularity of mystics (tasawwuf), as well as the prominence of tradition (Hadith), religious jurisprudence (fiqh), and philosophy in Qazvin, led to the emergence of many mosques and religious schools. They include:

The Qajar-era Caravanserai of Sa'd al-Saltaneh. 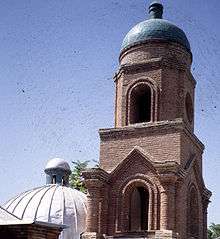 The Russian Church of Qazvin today sits adjacent to the campus of Islamic Azad University of Qazvin.

About 100 km (62 mi) south-west of Qazvin are the tombs of two Saljuki era princes — Abu Saeed Bijar, son of Sa'd, and Abu Mansur Iltai, son of Takin — located in two separate towers known as the Kharraqan twin towers. Constructed in 1067 CE, these were the first monuments in Islamic architecture to include a non-conic two-layered dome. Both towers were severely damaged by a devastating earthquake in March 2003.

Qazvin has three buildings built by Russians in the late 19th/early 20th century. Among these is the current Mayor's office (former Ballet Hall) and a water reservoir. St. Nicholas church was built in 1904 by the Russian Company for Roads in Persia which had its headquarter here. The church was in use until being decommissioned in 1984 because the community of Russian emigres in Qazvin did not exist any more. The iconostasis and bell was removed to Tehran and the building handed over to the Iranian government which keeps it available to the public as a historic monument. In front of the church is a 1906 memorial to a Russian road engineer.[15] 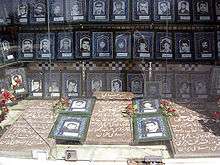 A memorial of the many Qazvinis who died during the revolution of Iran and during the Iran–Iraq War.

Qazvin today is a center of textile trade, including cotton, silk and velvet, in addition to leather. It is on the railroad line and the highway between Tehran and Tabriz. Qazvin has one of the largest power plants feeding electricity into Iran's national power grid, the Shahid Raja'i facility, which provides 7% of Iran's electrical power.

Qazvin is a well-known city because of its famous athletes. The city has highly focused on athletic teams along recent years. Techmash is a basketball team which entered Iranian Basketball Super League in 2013. 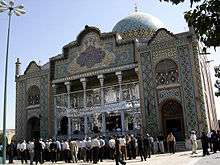 Qazvin is an ancient city containing fine examples of Iranian architecture from various ages. This is the Shazdeh Hosein Shrine.

There have been an abundance of known people who lived in Qazvin, or came from Qazvin, whose tombs are scattered throughout the cities and villages of the province. These include: