Not to be confused with Bizarre.
For the version control system, see GNU Bazaar. For other uses, see Bazaar (disambiguation). 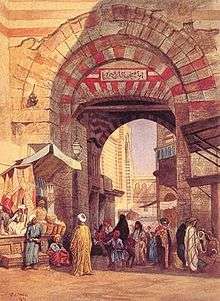 "Bazaar at Athens", in the Ottoman Empire Edward Dodwell. 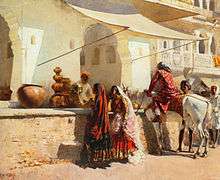 Mozaffarieh: An alley in Tabriz Bazaar devoted to carpet selling. 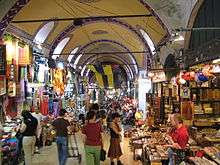 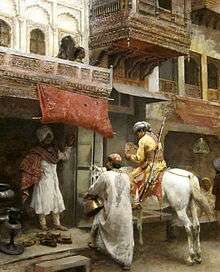 Troopers in the Bazaar in 19th century India. 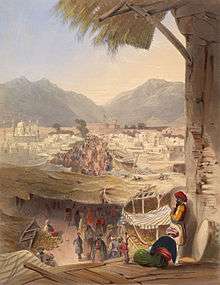 City of Kandahar, its principal bazaar and citadel, taken from the Nakkara Khauna 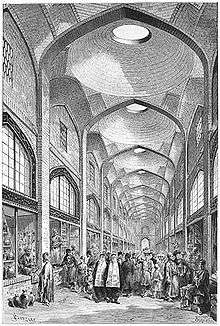 Vakil Bazaar as seen by Jane Dieulafoy in 1881

A bazaar is a permanently enclosed marketplace or street where goods and services are exchanged or sold. The term originates from the Persian word bāzār,[1] from Middle Persian wāzār,[2] from Old Persian vāčar,[3] from Proto-Indo-Iranian *wahā-čarana.[4] Souq is another word used in the Middle East for an open-air marketplace or commercial quarter. The term bazaar is sometimes also used to refer to the "network of merchants, bankers, and craftsmen" who work in that area. Although the current meaning of the word is believed to have originated in native Zoroastrian Persia, its use has spread and now has been accepted into the vernacular in countries around the world. The rise of large bazaars and stock trading centers in the Muslim World allowed the creation of new capitals and eventually new empires. New and wealthy cities such as Isfahan, Golconda, Samarkand, Cairo, Baghdad, and Timbuktu were founded along trade routes and bazaars. Street markets is the European and North American equivalents.

In North America, the United Kingdom and some other European countries, the term can be used as a synonym for a "rummage sale", to describe charity fundraising events held by churches or other community organizations in which either donated used goods (such as books, clothes, and household items) or new and handcrafted (or home-baked) goods are sold for low prices, as at a church or other organisation's Christmas bazaar, for example. In South Korea, the word '바자회',[7] composed of '바자' (transliteration of 'bazaar') + 회 (會, meaning 'gathering') is used to describe the sort of rummage sale described above.

Although Turkey contains many famous markets known as "bazaars" in English, the Turkish word "pazar" refers to an outdoor market held at regular intervals, not a permanent structure containing shops. English place names usually translate "çarşı" (shopping district) as "bazaar" when they refer to an area with covered streets or passages. For example, the Turkish name for the "Grand Bazaar in Istanbul "Kapalıçarşı" (gated shopping area), while the Spice Bazaar is the "Mısır Çarşısı" (Egyptian shopping area). 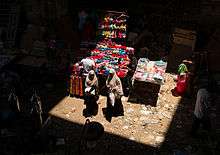 Two Egyptian women shopping at a market next to the Al-Ghouri Complex in Cairo, Egypt.

(These are bazaars in the English sense of the word and are referred to as "çarşı" in Turkish).