For other uses, see Iwan (disambiguation). 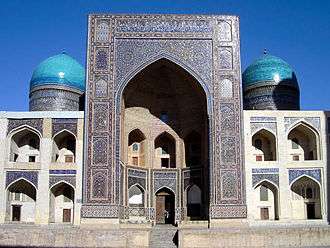 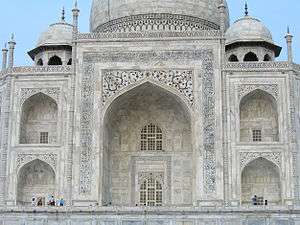 The Taj Mahal uses iwans for both entrances and decorative features 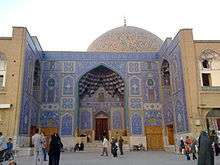 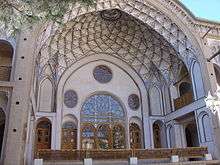 Iwan of the Āmeri House in Kashan, Iran 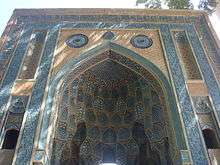 An iwan (Persian: ایوان‎‎ eyvān, Arabic: إيوان‎‎ Iwan, also spelled ivan, Turkish: eyvan)[1][2] is a rectangular hall or space, usually vaulted, walled on three sides, with one end entirely open. The formal gateway to the iwan is called pishtaq, a Persian term for a portal projecting from the facade of a building, usually decorated with calligraphy bands, glazed tilework, and geometric designs.[3][4] Since the definition allows for some interpretation, the overall forms and characteristics can vary greatly in terms of scale, material, or decoration. Iwans are most commonly associated with Islamic architecture; however, the form was invented much earlier and fully developed in Mesopotamia, around the third century CE during the Parthian period.

The root for this term is Old Persian 'apadana' (see Apadana palace at Persepolis) where king Darius I declares in an inscription, "I Darius,........ had this 'apadana' constructed.." This is a name given to this particular palace in modern literature, although the name simply implies a type of structure—the iwan, not a particular palace. The term in Old Persian stand for "unprotected" (a-pâd-ana), since the design allows for the structure to be open to the elements on one side, whence the term. At Persepolis, however, the 'apadana' takes the form of a veranda, where instead of a vaulted hall, there is a flat roof held up by columns—but still, open to the elements on only one side. A comparable structure would be found 2000 years later in Isfahan at the Palace of Chehel Sotoun. By the time of the Parthian and the Sasanian dynasties, iwan had emerged as two types of structure: the old columned one, and a newer vaulted structure—both, however, carrying the same native name of apadana/iwan, because both types are "unprotected" (open on one side to the elements).

Iwans were a trademark of the Parthian Empire (247 BC–AD 224) and later the Sassanid architecture of Persia ( 224 -651.), later finding their way throughout the Arab and Islamic architecture which started developing in 7th century AD, after the period of Muhammad (c. 570–632).[5] This development reached its peak during the Seljuki era, when iwans became a fundamental unit in architecture, and later the Mughal architecture.[6][7] The form is not confined to any particular function, and is found in buildings for either secular or religious uses, and in both public and residential architecture.

Ivan is an alternative form of the name, used in Iran, reflecting the Persian pronunciation.[8]

Many scholars including Edward Keall, André Godard, Roman Ghirshman, and Mary Boyce, discuss the invention of the iwan as developing in Mesopotamia, the area around today's Iraq. Although debate remains among scholars as to how the iwan developed, there is a general consensus that the iwan evolved locally, and was thus not imported from another area.[9][Note 1] Similar structures, known as "pesgams", were found in many Zoroastrian homes in Yazd, where two or four halls would open onto a central court; however, it is not known whether these spaces were vaulted.[10]

The feature which most distinctly makes the iwan a landmark development in the history of Ancient Near Eastern architecture is the incorporation of a vaulted ceiling. A vault is defined as a ceiling made from arches, known as arcuated, usually constructed with stone, concrete, or bricks.[11] Earlier buildings would normally be covered in a trabeated manner, with post and lintel beams. However, vaulted ceilings did exist in the ancient world before the invention of the iwan, both within Mesopotamia and outside it. Mesopotamian examples include Susa, where the Elamites vaulted many of their buildings with barrel vaults, and Nineveh, where the Assyrians frequently vaulted their passages for fortification purposes.[12]

Outside Mesopotamia, a number of extant vaulted structures stand, including many examples from Ancient Egypt, Rome, and the Mycenaeans. For example, the Mycenaean Treasury of Atreus, constructed around 1250 BCE, features a large corbelled dome. Egyptian architecture began to use vaulting in their structures after the Third Dynasty, after around 2600 BCE, constructing very early barrel vaults using mud brick.[13]

Although some scholars have asserted that the iwan form may have developed under the Seleucids, today most scholars agree that the Parthians were the inventors of the iwan.[Note 2] One of the earliest Parthian iwans was found at Seleucia (Seleucia-on-the-Tigris), located on the Tigris River, where the shift from post-and-lintel construction to vaulting occurred around the 1st century CE.[12] Other early iwans have been suggested at Ashur, where two buildings containing iwan-like foundations were found. The first building, located near the ruins of a ziggurat, featured a three-iwan façade.[14] The proximity of the building to a ziggurat suggests that it may have been used for religious preparations or rituals.[14] It could also indicate a palatial building, as it was common for the ziggurat and palace to be situated next to one another in the Ancient Near East. What seems to be a palace courtyard had iwans on each side, which remained a common features well into Islamic times.[15]

The second iwan building is located across a courtyard, and Walter Andrae, a German archaeologist, suggested that it served as an administrative building rather than as a religious center because there is no evidence of inscriptions or wall carvings.[16] Although the absence of inscriptions or carvings does not equate necessarily to a civic function, it was not uncommon for iwans to serve a secular use, as they were frequently incorporated into palaces and community spaces.[17] Other early sites including Parthian iwans include Hatra, the Parthian ruins at Dura Europos, and Uruk.[18]

The Sasanian Persians also favored the iwan form, and adopted it into much of their architecture; however, they transformed the function. The Parthian iwan led to other spaces, but its primary function served as a room itself. In contrast, the Sasanian iwan served as a grand entranceway to a larger, more elegant space which was usually domed.[19] Both the Parthian and Sasanian iwans were often elaborately decorated with inscriptions and sculpted reliefs including scenes of hunting, vegetal motifs, abstract, geometric patterns, and animal scenes.[20][21] The reliefs’ style shows a blend of influences including other Near Eastern cultures, Roman, and Byzantine decorative traditions.[22] For instance, the rock-cut iwan at Taq-i Bustan features Roman style figures, Eastern-inspired vegetal patterns and crenellations, and wide-eyed, stylized Byzantine-esque angels and mosaic interiors.

The Iwan of Khosrau

The most famous example of a Persian Sassanid iwan is the Taq-i Kisra ("Iwan of Khosrau"), part of a palace complex in Mada'in which is the only visible remaining structure of the ancient Sasanian capital of Ctesiphon. It is near the modern town of Salman Pak, Iraq, on the Tigris River about twenty-five miles south of Baghdad. Construction began during the reign of Khosrau I after a campaign against the Eastern Romans in 540 AD.[23] The arched iwan hall, open on the facade side, was about 37 meters high 26 meters across and 50 meters long, the largest vault ever constructed at the time.[24] Early photographs and 19th-century drawings show that the remaining part of the hall has reduced since then.

The dating for the Taq-i Kisra has been debated throughout history; however, a variety of documents detailing the arrival of Byzantine sculptors and architects sent by the Byzantine Emperor Justinian, suggest that the correct date for the construction is around 540 CE.[25] The 540 CE date suggests that the construction of the Taq-i Kisra, and perhaps Justinian’s “help” was in response to the victory of Sasanian king Khosrau I over Antioch in 540 CE, which is depicted in the mosaics decorating the interior of the Taq-i Kisra.[25] The Taq-i Kisra was finally demolished for the most part by al-Mansur, who reused the bricks to build his own palace complex.[26] 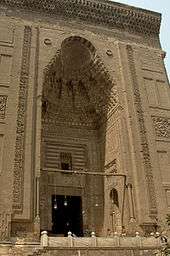 Iwan of the Mosque-Madrassa of Sultan Hassan, Cairo, Egypt, 1356

Islamic art and architecture was also heavily influenced inspired by Roman, Byzantine, and Sasanian designs, both due to the presence of extant examples and contact between cultures. For example, the Great Mosque of Damascus was built in the early eighth century CE on the site of a Roman Christian Church, and incorporates a nave-like element with a tall arcade and clerestory. The Sasanian Empire also had a tremendous impact on the development of Islamic architecture; however, there was some overlap between the Sasanians and the Muslims making it difficult at times to determine who was influencing whom.[27]

Islamic art and architecture borrows many Sasanian decorative motifs and architectural forms, including the iwan; however, the adoption of the iwan was not immediate. For example, the implementation of the standard four-iwan plan which has become standard in Islamic mosque design was not introduced until the twelfth century, long after its invention in the first century CE.[28] Iwans were used frequently in Islamic non-religious architecture before the twelfth century, including houses, community spaces, and civic structures such as the bridge of Si-o-Se Pol in Isfahan.[29] Furthermore, Islamic architecture incorporated the Sasanian placement for the iwan by making it a grand entrance to the prayer hall or to a mosque tomb, and often placing it before a domed space.[30]

As well as often using numbers of iwans on the exterior of buildings, as at the Taj Mahal, iwans were often placed on all or several sides of internal spaces and courtyards, a form going back to Parthian times.[31]

One of the first elaborate iwans used in an Islamic religious context can be found at the Al-Aqsa Mosque on the Temple Mount in Jerusalem, which dates from the 12th Century.[32] The history of the evolution of the standard four-iwan plan has been debated by scholars, and some claim that it originated in madrasas, or religious schools designed to educate aristocratic children about Sunnism.[33] However, the four-iwan plan was already in use in palace and temple architecture during both the Parthian and Sasanian periods.[12] The use of iwans would continue to flourish in both mosques and secular spaces starting in the thirteenth century, and would become one of the most iconic features of Islamic architecture, as suggested by the elaborate seventeenth-century iwans in the Great Mosque at Isfahan.

The Great Iwan of Cairo

The Great Iwan (or al-Iwan al-Kabir, Dar al-'Adl, Iwan of al-Nasir) of Cairo was a public and ceremonial space located in the southern section of the Saladin Citadel where the Mamluk sultan sat enthroned to administer justice, receive ambassadors, and carry out other duties of state. The structure used to be known as Dar al-'Adl during the reign of Saladin, the Mamluk ruler of the Bahri dynasty Al-Nasir Muhammad rebuilt the monumental structure twice, in 1315 and 1334. The Great Iwan was demolished by Muhammad Ali Pasha in the early 19th century.

The 19th century Description de l'Égypte depicted a square hypostyle structure with five parallel aisles and a dome. The building was open to the exterior on three sides through arcades, and the main façade was articulated with a large central arch flanked by two smaller arches on either side.[34][35]