For other uses, see Rainforest (disambiguation). 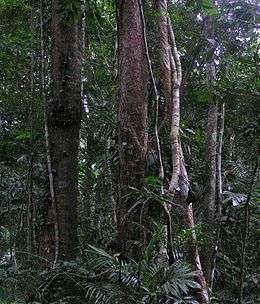 The Daintree Rainforest in Queensland, Australia 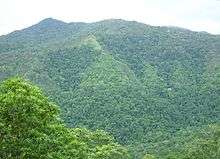 The Daintree Rainforest near Cairns, in Queensland, Australia

Rainforests are forests characterized by high rainfall, with annual rainfall between 250 and 450 centimetres (98 and 177 in).[1] There are two types of rainforest: tropical rainforest and temperate rainforest. The monsoon trough, alternatively known as the intertropical convergence zone, plays a significant role in creating the climatic conditions necessary for the Earth's tropical rainforests.

Around 40% to 75% of all biotic species are indigenous to the rainforests.[2] It has been estimated that there may be many millions of species of plants, insects and microorganisms still undiscovered in tropical rainforests. Tropical rainforests have been called the "jewels of the Earth" and the "world's largest pharmacy", because over one quarter of natural medicines have been discovered there.[3] Rainforests are also responsible for 28% of the world's oxygen turnover, sometimes misnamed oxygen production,[4] processing it through photosynthesis from carbon dioxide and consuming it through respiration.

The undergrowth in some areas of a rainforest can be restricted by poor penetration of sunlight to ground level. If the leaf canopy is destroyed or thinned, the ground beneath is soon colonized by a dense, tangled growth of vines, shrubs and small trees, called a jungle. The term jungle is also sometimes applied to tropical rainforests generally. 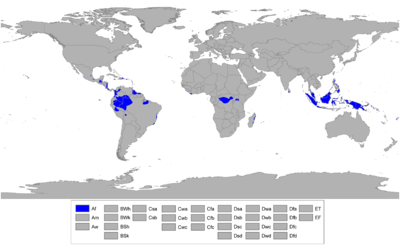 Many of the world's tropical forests are associated with the location of the monsoon trough, also known as the intertropical convergence zone.[7] The broader category of tropical moist forests are located in the equatorial zone between the Tropic of Cancer and Tropic of Capricorn. Tropical rainforests exist in Southeast Asia (from Myanmar (Burma) to the Philippines, Malaysia, Indonesia, Papua New Guinea, Sri Lanka, Sub-Saharan Africa from Cameroon to the Congo (Congo Rainforest), South America (e.g. the Amazon Rainforest), Central America (e.g. Bosawás, southern Yucatán Peninsula-El Peten-Belize-Calakmul), Australia, and on many of the Pacific Islands (such as Hawaiʻi). Tropical forests have been called the "Earth's lungs", although it is now known that rainforests contribute little net oxygen addition to the atmosphere through photosynthesis.[8][9]

Tropical forests cover a large part of the globe, but temperate rainforests only occur in few regions around the world. Temperate rainforests are rainforests in temperate regions. They occur in North America (in the Pacific Northwest in Alaska, British Columbia, Washington, Oregon and California), in Europe (parts of the British Isles such as the coastal areas of Ireland and Scotland, southern Norway, parts of the western Balkans along the Adriatic coast, as well as in Galicia and coastal areas of the eastern Black Sea, including Georgia and coastal Turkey), in East Asia (in southern China, Highlands of Taiwan, much of Japan and Korea, and on Sakhalin Island and the adjacent Russian Far East coast), in South America (southern Chile) and also in Australia and New Zealand.[10]

A tropical rainforest typically has a number of layers, each with different plants and animals adapted for life in that particular area. Examples include the emergent, canopy, understorey and forest floor layers.

The emergent layer contains a small number of very large trees called emergents, which grow above the general canopy, reaching heights of 45–55 m, although on occasion a few species will grow to 70–80 m tall.[11][12] They need to be able to withstand the hot temperatures and strong winds that occur above the canopy in some areas. Eagles, butterflies, bats and certain monkeys inhabit this layer. 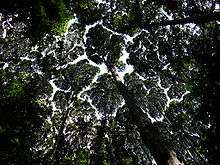 The canopy layer contains the majority of the largest trees, typically 30 metres (98 ft) to 45 metres (148 ft) tall. The densest areas of biodiversity are found in the forest canopy, a more or less continuous cover of foliage formed by adjacent treetops. The canopy, by some estimates, is home to 50 percent of all plant species. Epiphytic plants attach to trunks and branches, and obtain water and minerals from rain and debris that collects on the supporting plants. The fauna is similar to that found in the emergent layer, but more diverse. A quarter of all insect species are believed to exist in the rainforest canopy. Scientists have long suspected the richness of the canopy as a habitat, but have only recently developed practical methods of exploring it. As long ago as 1917, naturalist William Beebe declared that "another continent of life remains to be discovered, not upon the Earth, but one to two hundred feet above it, extending over thousands of square miles." True exploration of this habitat only began in the 1980s, when scientists developed methods to reach the canopy, such as firing ropes into the trees using crossbows. Exploration of the canopy is still in its infancy, but other methods include the use of balloons and airships to float above the highest branches and the building of cranes and walkways planted on the forest floor. The science of accessing tropical forest canopy using airships or similar aerial platforms is called dendronautics.[13]

The understory or understorey layer lies between the canopy and the forest floor. It is home to a number of birds, snakes and lizards, as well as predators such as jaguars, boa constrictors and leopards. The leaves are much larger at this level and insect life is abundant. Many seedlings that will grow to the canopy level are present in the understory. Only about 5% of the sunlight shining on the rainforest canopy reaches the understory. This layer can be called a shrub layer, although the shrub layer may also be considered a separate layer.

Rainforest in the Blue Mountains, Australia

The forest floor, the bottom-most layer, receives only 2% of the sunlight. Only plants adapted to low light can grow in this region. Away from riverbanks, swamps and clearings, where dense undergrowth is found, the forest floor is relatively clear of vegetation because of the low sunlight penetration. It also contains decaying plant and animal matter, which disappears quickly, because the warm, humid conditions promote rapid decay. Many forms of fungi growing here help decay the animal and plant waste.

More than half of the world's species of plants and animals are found in the rainforest.[14] Rainforests support a very broad array of fauna, including mammals, reptiles, birds and invertebrates. Mammals may include primates, felids and other families. Reptiles include snakes, turtles, chameleons and other families; while birds include such families as vangidae and Cuculidae. Dozens of families of invertebrates are found in rainforests. Fungi are also very common in rainforest areas as they can feed on the decomposing remains of plants and animals. Many rainforest species are rapidly disappearing due to deforestation, habitat loss and pollution of the atmosphere.[15]

Despite the growth of vegetation in a tropical rainforest, soil quality is often quite poor. Rapid bacterial decay prevents the accumulation of humus. The concentration of iron and aluminium oxides by the laterization process gives the oxisols a bright red colour and sometimes produces mineral deposits such as bauxite. Most trees have roots near the surface, because there are insufficient nutrients below the surface; most of the trees' minerals come from the top layer of decomposing leaves and animals. On younger substrates, especially of volcanic origin, tropical soils may be quite fertile. If rainforest trees are cleared, rain can accumulate on the exposed soil surfaces, creating run-off and beginning a process of soil erosion. Eventually streams and rivers form and flooding becomes possible.

A natural rainforest emits and absorbs vast quantities of carbon dioxide. On a global scale, long-term fluxes are approximately in balance, so that an undisturbed rainforest would have a small net impact on atmospheric carbon dioxide levels,[16] though they may have other climatic effects (on cloud formation, for example, by recycling water vapour). No rainforest today can be considered to be undisturbed.[17] Human-induced deforestation plays a significant role in causing rainforests to release carbon dioxide,[18] as do other factors, whether human-induced or natural, which result in tree death, such as burning and drought.[19] Some climate models operating with interactive vegetation predict a large loss of Amazonian rainforest around 2050 due to drought, forest dieback and the subsequent release more carbon dioxide.[20] Five million years from now, the Amazon rainforest may long since have dried and transformed itself into savannah, killing itself in the progress (changes such as this may happen even if all human deforestation activity ceases overnight).[21] The descendants of our known animals may adapt to the dry savannah of the former Amazonian rainforest and thrive in the new, warmer temperatures.[21] 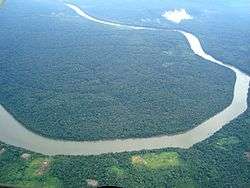 Tropical rainforests provide timber as well as animal products such as meat and hides. Rainforests also have value as tourism destinations and for the ecosystem services provided. Many foods originally came from tropical forests, and are still mostly grown on plantations in regions that were formerly primary forest.[22] Also, plant-derived medicines are commonly used for fever, fungal infections, burns, gastrointestinal problems, pain, respiratory problems, and wound treatment.[23]

Central African rainforest is home of the Mbuti pygmies, one of the hunter-gatherer peoples living in equatorial rainforests characterised by their short height (below one and a half metres, or 59 inches, on average). They were the subject of a study by Colin Turnbull, The Forest People, in 1962.[26] Pygmies who live in Southeast Asia are, amongst others, referred to as “Negrito”.

Satellite photograph of the haze above Borneo and Sumatra on 24 September 2015.

Tropical and temperate rainforests have been subjected to heavy logging and agricultural clearance throughout the 20th century and the area covered by rainforests around the world is shrinking.[27] Biologists have estimated that large numbers of species are being driven to extinction (possibly more than 50,000 a year; at that rate, says E. O. Wilson of Harvard University, a quarter or more of all species on Earth could be exterminated within 50 years)[28] due to the removal of habitat with destruction of the rainforests.

Another factor causing the loss of rainforest is expanding urban areas. Littoral rainforest growing along coastal areas of eastern Australia is now rare due to ribbon development to accommodate the demand for seachange lifestyles.[29]

The forests are being destroyed at a rapid pace.[30][31][32] Almost 90% of West Africa's rainforest has been destroyed.[33] Since the arrival of humans, Madagascar has lost two thirds of its original rainforest.[34] At present rates, tropical rainforests in Indonesia would be logged out in 10 years and Papua New Guinea in 13 to 16 years.[35] According to Rainforest Rescue, a main reason for the increasing deforestation rate especially in Indonesia is the expansion of oil palm plantations to meet the growing demand for cheap vegetable fats and biofuels. In Indonesia, palm oil is already cultivated on nine million hectares and, together with Malaysia, the island nation produces about 85 percent of the world’s palm oil.[36]

Several countries,[37] notably Brazil, have declared their deforestation a national emergency.[38] Amazon deforestation jumped by 69% in 2008 compared to 2007's twelve months, according to official government data.[39] Deforestation could wipe out or severely damage nearly 60% of the Amazon Rainforest by 2030, says a 2007 report from WWF.[40]

However, a January 30, 2009 New York Times article stated, "By one estimate, for every acre of rain forest cut down each year, more than 50 acres of new forest are growing in the tropics..." The new forest includes secondary forest on former farmland and so-called degraded forest.[41]

Part of the Illawarra Brush, in New South Wales, Australia.