This article is about the circle of latitude. For other uses, see Tropic of Cancer (disambiguation). 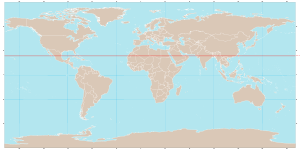 The Tropic of Cancer, also referred to as the Northern Tropic is 23°26′13.5″ (or 23.43708°) north of the Equator. It is the most northerly circle of latitude on the Earth at which the Sun can be directly overhead. This occurs on the Northern solstice, when the Northern Hemisphere is tilted toward the Sun to its maximum extent.[1]

Its Southern Hemisphere counterpart, marking the most southerly position at which the Sun can be directly overhead, is the Tropic of Capricorn. These tropics are two of the five major circles of latitude that mark maps of the Earth, besides the Arctic and Antarctic Circles and the Equator. The positions of these two circles of latitude (relative to the Equator) are dictated by the tilt of the Earth's axis of rotation relative to the plane of its orbit. 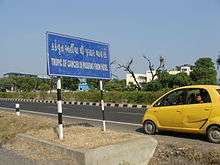 The Tropic of Cancer passes through Gujarat, India 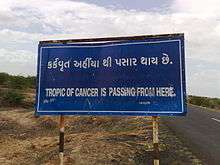 Tropic of Cancer, a few miles from Rann of Kutch, Gujarat, India

Road sign South of Dakhla, Western Sahara marking the Tropic of Cancer. The sign was placed by the Budapest-Bamako rally participants, thus the inscription is in English and Hungarian.

The imaginary line is called the Tropic of Cancer because when the Sun reaches the zenith at this latitude (at the June solstice), it is entering the astrological sign of Cancer. Around 2000 years ago, when it was named, the Sun was also in the direction of the constellation Cancer (Latin for crab). However, this is no longer true due to the precession of the equinoxes. According to International Astronomical Union boundaries, the Sun now is in Taurus at this time. The word "tropic" itself comes from the Greek "trope (τροπή)", meaning turn (change of direction, or circumstances), inclination, referring to the fact that the sun appears to "turn back" at the solstices. 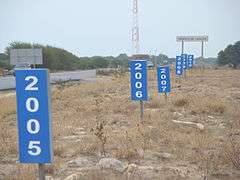 Carretera 83 (Vía Corta) Zaragoza-Victoria, km 27+800. Of all crossings of the Tropic of Cancer with Mexican federal highways, this is the only place where the latitude is marked with precision and where the annual drift between the years 2005 and 2010 can be appreciated. 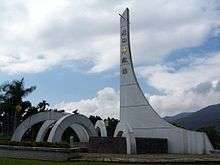 North of the tropic are the subtropics and the North Temperate Zone. The equivalent line of latitude south of the Equator is called the Tropic of Capricorn, and the region between the two, centered on the Equator, is the tropics.

Starting at the Prime Meridian and heading eastward, the Tropic of Cancer passes through 16 countries:

Excluding cooler highland regions in China, the climate at the Tropic of Cancer is generally hot and dry except for easterly coastal areas where orographic rainfall can be very heavy, in some places reaching 4 metres (160 in). Most regions on the Tropic of Cancer experience two distinct seasons: an extremely hot summer with temperatures often reaching 45 °C (113 °F) and a warm winter with maxima around 22 °C (72 °F). Much land on or near the Tropic of Cancer is part of the Sahara Desert, whilst to the east the climate is torrid monsoonal with a short wet season from June to September and very little rainfall for the rest of the year.

The highest mountain on or adjacent to the Tropic of Cancer is Yushan in Taiwan; though it had glaciers descending as low as 2,800 metres (9,190 ft) during the Last Glacial Maximum, none survive and at present no glaciers exist within 470 kilometres (290 mi) of the Tropic of Cancer; the nearest currently surviving are the Minyong and Baishui in the Himalayas to the north and on Iztaccíhuatl to the south.

According to the rules of the Fédération Aéronautique Internationale, for a flight to compete for a round-the-world speed record, it must cover a distance no less than the length of the Tropic of Cancer, cross all meridians, and end on the same airfield where it started.

For an ordinary circumnavigation the rules are somewhat relaxed and the distance is set to a rounded value of at least 37,000 kilometers.