Richard Bassett (April 2, 1745 – August 15, 1815) was an American lawyer and political figure from the state of Delaware who, as a veteran of the Revolutionary War and delegate to the Constitutional Convention of 1787, is considered one of the Founding Fathers of the United States. A member of the Federalist Party, he served in the Delaware General Assembly, as Governor of Delaware, and as U.S. Senator from Delaware. He holds the Senate Rank of 1, as the most senior United States Senator during the First Congress of the United States.[1]

Bassett was born at Bohemia Ferry in the Province of Maryland's Cecil County. His mother, Judith Thompson, had married part-time tavern-owner and farmer Arnold Bassett who deserted the family during Richard's childhood. Since Judith Thompson was the great granddaughter and heiress of Augustine Herrman, the original owner of Cecil County's massive estate of Bohemia Manor, her family raised young Richard. Eventually this heritage provided him with inherited wealth, including the Bohemia Manor plantation as well as much other property in Delaware's New Castle County. 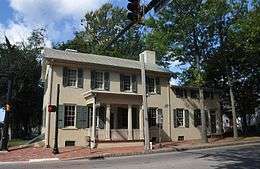 Bassett studied law under Judge Robert Goldsborough of Province of Maryland's Dorchester County and, in 1770, Richard was admitted to the Bar. He moved to Delaware and began a practice in Kent County's court town of Dover, which, in 1777, became the newly independent state's capital city. By concentrating on agricultural pursuits as well as religious and charitable concerns, he quickly established himself amongst the local gentry and “developed a reputation for hospitality and philanthropy.”[2] In 1774, at the age of 29, Richard married Ann Ennals and they had three children, Richard Ennals, Ann (known as Nancy) and Mary. After Ann Ennals' death he married Betsy Garnett in 1796. They were active members of the Methodist Church, and gave the church much of their time and attention.

Bassett was a reluctant revolutionary, more closely in tune with the approach of George Read than with his neighbors from Kent County, Caesar Rodney and John Haslet. Nevertheless, in 1774 he was elected to the local Boston Relief Committee. When the new government of Delaware was organized, Bassett served on the 1776 Delaware Council of Safety, and was a member of the convention responsible for drafting the Delaware Constitution of 1776, which was adopted September 20, 1776. He was then one of the conservatives elected to 1st Delaware General Assembly, and served for four sessions, from 1776/77 through 1779/80. Subsequently, he was a member of the House of Assembly for the 1780/81 and 1781/82 sessions, and returned to the Legislative Council, for three sessions from 1782/83 through 1784/85. He concluded his state legislative career with a final term in the House of Assembly during the 1786/87 session. He thereby represented Kent County in all but one session of the Delaware General Assembly from independence to the adoption of the U.S. Constitution of 1787.

However, Bassett’s most notable contributions during the American Revolution were his efforts to mobilize the state’s military. Some sources credit him with developing the plans for raising and staffing the 1st Delaware Regiment, with his neighbor, John Haslet at its command. Known as the "Delaware Continentals" or "Delaware Blues", they were from the smallest state, but at some 800 men, were the largest battalion in the Continental Army. In his book 1776, historian David McCullough describes them as "turned out in handsome red trimmed blue coats, white waistcoats, buckskin breeches, white woolen stockings, and carrying fine, 'lately imported' English muskets". Raised in early 1776, they went into service in July and August 1776. Bassett also participated in the recruitment of the reserve militia that served in the “Flying Camp” of 1776, and the Dover Light Infantry, led by another neighbor, Thomas Rodney.

When the British Army marched through northern New Castle County, on the way to the Battle of Brandywine and the capture of Philadelphia, Bassett “appears to have joined his friend Rodney in the field as a volunteer”. Once the Delaware militia returned home after the British retired from the area, Bassett continued as a part-time soldier, assuming command of the Dover Light Horse, Kent County's militia cavalry unit. in 1799 Bassett was elected governor of Delaware and held his position until 1801.

Bassett was one of the delegates to the Constitutional Convention and, without supplying much input, signed the Constitution. Meanwhile, the Delaware Constitution of 1776 was in need of revision, and Bassett once again joined with another of Delaware's Founding Fathers, John Dickinson in leading the convention to draft a revision, which became the Delaware Constitution of 1792. Upon his retirement from the United States Senate in 1793, Bassett began a six-year term as the first Chief Justice of the Delaware Court of Common Pleas. At the time it was a court of general civil jurisdiction and the predecessor of the present Delaware Superior Court. By this time Bassett was formally a member of the Federalist Party, and as such was elected Governor of Delaware in 1799. It was during his time in office that Pierre Samuel du Pont de Nemours first came to Delaware to begin his gunpowder business.

However, it was also during his term that Thomas Jefferson was elected President of the United States, causing great concern for the future of the country among the Federalists. The retiring President John Adams, rushed the Judiciary Act of 1801 through the Federalist 6th Congress, creating a number of new judgeships on the United States circuit courts. Being a staunch Federalist and old political ally, Adams, on his last day in office, February 18, 1801, appointed Bassett, as part of the so-called "midnight judge" appointments, to one of the positions, judge of the Third Circuit. He was confirmed by the United States Senate on February 20, 1801, and received his commission the same day. But the legislation was repealed by the new Jeffersonian 7th Congress, and his tenure ended quickly on July 1, 1802. He never again held public office.

In addition to his high profile in government, Bassett was a devout and energetic convert to Methodism. Having met Francis Asbury in 1778 at the home of their mutual friend, Judge Thomas White, Bassett soon had a conversion experience, and for the remainder of his life devoted much of his attention and wealth to the promotion of Methodism. He and Asbury remained lifelong friends. This association caused him to become linked in many people’s minds to the loyalists, as both White and Asbury were viewed to be opposed to the war. But it also led to a strong abolitionist belief, which led him to free his own slaves and advocate the emancipation of others.

Bassett died at Bohemia Manor and was first buried there. In 1865 his remains were moved to a Bassett and Bayard mausoleum in the Wilmington and Brandywine Cemetery in Delaware's largest city, Wilmington.

Bassett was a stout man of medium build. He was very fashionable and influential in society. At the Constitutional Convention of 1787 he was described as "gentlemanly, a religious enthusiast and a man of plain sense" with "modesty enough to hold his tongue". Bassett’s daughter, Anne married James A. Bayard, a U.S. Representative and U.S. Senator, and they were the ancestors of the branch of the Bayard family that has played a prominent role in Delaware politics ever since. His niece and adopted daughter, Rachel McCleary, married Governor Joshua Clayton of yet another family long prominent in Delaware politics.

Bassett Street in Wisconsin's capital, Madison, is named in his honor.[3]

Beginning in 1792 elections were held the first Tuesday of October. The State President became the Governor and was popularly elected. He takes office the third Tuesday in January and had a three-year term. Judges of the Courts of Common Pleas were also selected by the General Assembly for the life of the person appointed. U.S. Circuit Court Judges were appointed by the President and approved by the U.S. Senate.