Carney was born in Wilmington, Delaware, the son of Ann Marie (née Buckley) and John Charles "Jack" Carney. His great-grandparents immigrated from Ireland.[1] Carney was quarterback of the 1973 state championship St. Mark's High School football team, and earned All-Ivy League and Most Valuable Player honors in football at Dartmouth College, from which he graduated in 1978. While a student at Dartmouth, he joined the local Beta Alpha Omega fraternity. He later coached freshman football at the University of Delaware, while earning his master's degree in public administration.[2][3]

Carney has served as Deputy Chief Administrative Officer of New Castle County and as Secretary of Finance and Deputy Chief of Staff for Governor Tom Carper.

As Lieutenant Governor Carney presided over the Delaware State Senate and chaired the Board of Pardons. He was chairman of the Delaware Health Care Commission, the Interagency Council on Adult Literacy, the Criminal Justice Council, the Center for Education Technology, and the Livable Delaware Advisory Council. In 2002 he launched the education initiative "Models of Excellence in Education" to identify practices in schools that have raised student achievement. Carney was also selected by other Lieutenant Governors as chairman of the National Lieutenant Governors Association from July 2004 to July 2005.

Carney has long been an advocate for wellness issues in Delaware, sponsoring "BeHealthy Delaware" and "The Lt. Governor's Challenge" to encourage Delawareans to be more active and address the State's high rate of chronic diseases. He fought for Delaware's public smoking ban to improve health, cut cancer rates, and discourage teens from starting to smoke.

After completing his tenure as Lieutenant Governor in 2009, Carney served as president and chief operating officer of Transformative Technologies, which is investing in the DelaWind project, to bring offshore wind turbine construction to Delaware.[4] He planned to step down in early 2010 to concentrate on his U.S. House campaign.[5]

Carney sought the Democratic nomination for the office of Governor in 2008, as incumbent Governor Ruth Ann Minner was constitutionally barred from seeking a third term. However, despite the backing of most of the party establishment, Carney lost the Democratic primary by fewer than two thousand votes in a close race to State Treasurer Jack Markell, who went on to win the general election.[6] 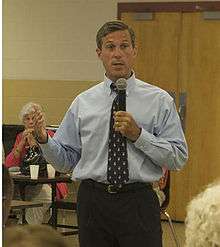 Carney was the Democratic Party nominee for Delaware's at-large seat in the United States House of Representatives in 2010. Carney faced Republican Glen Urquhart, Independent Party of Delaware Earl R. Lofland, Libertarian Brent A. Wangen, and Blue Enigma Jeffrey Brown. The seat had been held since 1993 by Republican Michael Castle, who declined to seek re-election to the House in order to run for the U.S. Senate seat once held by Vice President Joe Biden. In the first week of October, Fairleigh Dickinson University's PublicMind Poll released the results of its opinion research, showing Carney with a 15-point advantage over Urquhart, 51%-36%; well ahead in New Castle County (56-32) but running even with Urquhart (43-43) in the downstate counties of Kent and Sussex.[7] Days before the election, a second Fairleigh Dickinson poll showed Carney leading by 17 percentage points, 53% to 36% among likely voters.[8]

Carney won the seat by 16 points, 57%-41%, and took office on January 3 of 2011. His victory was one of the three seats gained by the Democrats in a year where they suffered a net loss of 63 seats to the Republicans.

In his bid for a second term, Carney faced Republican Tom Kovach, the President of New Castle County, and two minor candidates. In a debate with Kovach, Carney stated, "I will continue to do in Washington what I did in Delaware: work across the aisle to get things done. I learned early on that compromise is part of life." Speaking on the Affordable Care Act (commonly called Obamacare), Carney stated that it "is not perfect" but that it is the "only chance we have to get costs under control."[9] Carney was re-elected in a landslide, with 64% of the vote to Kovach's 33%.

Carney ran for re-election to a third term in 2014. He defeated Republican Rose Izzo by 59% to 37%, with Green Bernie August and Libertarian Scott Gesty taking 2% each.

In 2011, Carney and Illinois Republican Aaron Schock co-sponsored a bill that would use U.S. oil exploration to help fund a five-year federal highway construction project. The bill has not been voted on as of April 2012.[10][11]

On April 7, 2014, Carney introduced the Expatriate Health Coverage Clarification Act of 2014 (H.R. 4414; 113th Congress) into the House.[12] The bill would exempt expatriate health care plans from the requirements of the Affordable Care Act.[13] Carney argued that expatriates, a group that includes businessmen, pilots, and ship captains, usually already have special, high-quality health care plans designed to meet the unique needs to expatriates.[13] Carney said that "expatriate health insurance plans offer high-end, robust coverage to executives and others working outside their home country, giving them access to a global network of health care providers."[13] Carney indicated that requiring American expatriate health care providers to meet the tax and reporting requirements of the Affordable Care Act would put them at an unfair competitive disadvantage in comparison to foreign companies offering similar health care plans.[13]

Elections are held the first Tuesday after November 1. The Lieutenant Governor takes office the third Tuesday of January with a four-year term. U.S. Representatives take office January 3 and have a two-year term.

Carney and his wife, Tracey, have two children, Sam and Jimmy. They attended Wilmington Friends School. Sam is a Financial Management major at Clemson University. Jimmy is a Computer Science major at Tufts University.[14][15]