Thomas Fitzsimons (1741–1811) was an American merchant and statesman of Philadelphia, Pennsylvania. He represented Pennsylvania in the Continental Congress, the Constitutional Convention, and the U.S. Congress.

Fitzsimons' ancestry has not been verified, but one theory is that Fitzsimons was born at Ballikilty, north Co. Wexford, Leinster province, Ireland, in October, 1741.[1] He was a member of a collection of Irish families with the name "Fitzsymons" and its variants. In 1760 he immigrated to Philadelphia where his father soon died. However, Fitzsimons had enough education that he could begin work as a clerk in a mercantile house. He married Catherine Meade on November 23, 1761 and formed a business partnership with her brother George (grandfather of Civil War general George Meade). Their firm, which specialized in the West Indies trade, would successfully operate for over 41 years.[2]

However, this firm was soon hit by the new revenue measures created to help support the finances of the British Empire, including the much reviled Stamp Act of 1765. Concerned with these ideas, Fitzsimons became active in the Irish merchant community in Philadelphia, he was a founding member of the Friendly Sons of St. Patrick in 1771 and later, in 1774, a steering committee organized to protest the Coercive Acts.[2]

When Pennsylvania began mobilizing and organizing a militia to fight the British, Fitzsimons was soon involved. He served as captain of a company of home guards, which he raised, under the command of Colonel John Caldwalader. Initially his company served as part of the soldiers who manned posts along the New Jersey coast to defend against British actions. His unit later served as part of the reserve at the Battle of Trenton in 1776. Later in the war, he served on the Pennsylvania Council of Safety and headed a board to oversee the newly formed Pennsylvania Navy. Under this role, he helped organize the strategic resources of Pennsylvania, and later provided supplies, ships, and money in support of Pennsylvanian and French forces.

Thomas Fitzsimons entered active politics as a delegate to the Continental Congress in 1782 and 1783. He was a member of Pennsylvania's House of Representatives in 1786 and 1787. He was also a delegate to the U.S. Constitutional Convention in 1787. Although not a leading member of that convention, he supported a strong national government, the end of slavery, the United States Congress's powers to impose a tariff on imports and exports, the granting the house of representatives, and the equal power in making treaties to the United States Senate in making treaties. He was one of only two Catholic signers of the United States Constitution, the other being Daniel Carroll of Maryland.

After the Constitution was established, he served in the first three sessions of the House of Representatives as a Federalist, where he favored protective tariffs and a strong navy, co-drafting the 1794 law authorizing the original six frigates of the United States Navy.[3] Fitzsimons failed to win re-election in 1794, being defeated by John Swanwick, who carried seven of Philadelphia's twelve districts with 57% of the vote. This was partially attributed to public opinion turning against the Federalist Party over the forceful suppression of the Whiskey Rebellion. Although he never held elective office again, Fitzsimons served in 1798 as head of the committee of merchants overseeing the subscription-loan to build a warship at private expense for use in the Quasi-War.[3]

In 1802, Fitzsimons, along with Samuel Sitgreaves, were appointed by the Attorney General commissioners under the sixth article of the treaty of amity with Great Britain (American State Papers 37, Misc. Vol. 1, Pub. 154, Feb. 17, 1802).

While withdrawing from politics, Fitzsimons remained active in civic and business affairs. He served as president of Philadelphia's Chamber of Commerce, as a trustee of the University of Pennsylvania, Director of the Delaware Insurance Company and a director of the Bank of North America from 1781–1803. He was a founder of the bank, and supported efforts to found the College of Georgetown.[2] Fitzsimons had also helped found the Insurance Company of North America.

Fitzsimmons died on August 26, 1811 in Philadelphia, where he was buried in the cemetery of St. Mary's Catholic Church, which is in present-day Independence National Historical Park.[4][5] 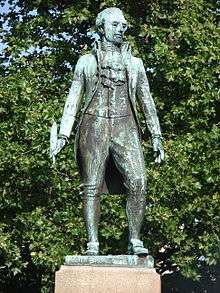 Statue of Fitzsimons in Philadelphia