For the museum in Paris, see Musée Rodin.

The Rodin Museum is an art museum located in Philadelphia, Pennsylvania which contains the largest collection of sculptor Auguste Rodin's works outside Paris . Opened in 1929, the museum is administered by the Philadelphia Museum of Art.

In 2012, the museum re-opened after a three-year, $9 million renovation that brought the museum back to its original vision of displaying Rodin's works.[1][2]

The Museum was the gift of movie-theater magnate Jules Mastbaum (1872–1926) to the city of Philadelphia. Mastbaum began collecting works by Rodin in 1923 with the intent of founding a museum to enrich the lives of his fellow citizens. Within just three years, he had assembled the largest collection of Rodin's works outside Paris, including bronze castings, plaster studies, drawings, prints, letters, and books. In 1926, Mastbaum commissioned French architects Paul Cret and Jacques Gréber to design the museum building and gardens. Unfortunately, the collector did not live to see his dream realized, but his widow honored his commitment to the city, and the Museum was inaugurated on November 29, 1929. Murals in the museum were executed by the painter Franklin C. Watkins. 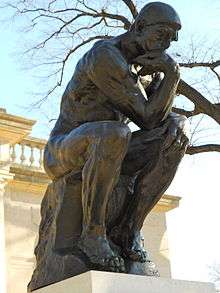 The best-known of Rodin's works, The Thinker (1880–1882), sits outside the museum in the entry courtyard. Visitors once entered through a cast of The Gates of Hell, located at the main entrance to the museum, which is no longer used. This massive 5.5-m-tall bronze doorway was originally created for the Museum of Decorative Arts (which was to have been located in Paris but never came into existence). Rodin sculpted more than 100 figures for these doors from 1880 until his death in 1917. This casting is one of the three originals; several others have been made since. Several of his most famous works, including The Thinker, are actually studies for these doors which were later expanded into separate works.