This article is about the museum in Philadelphia. For the Washington, D.C., office building recently renamed "Constitution Center", see Nassif Building.

The National Constitution Center is a nonprofit, nonpartisan institution devoted to explaining the United States Constitution. Located on Independence Mall in Philadelphia, Pennsylvania, the center serves as an interactive museum and a national town hall for constitutional dialogue, regularly hosting government leaders, journalists, scholars, and celebrities for public discussions including presidential debates. The center houses the Annenberg Center for Education and Outreach, which offers civic learning resources both onsite and online. It does not contain the original Constitution, which is stored at the National Archives Building in Washington, D.C.

The groundbreaking ceremony, attended by President Bill Clinton,[1] was held on September 17, 2000–213 years to the day after the original Constitution was signed. The National Constitution Center officially opened its doors on July 4, 2003,[2] joining other historic sites and iconic attractions in what has been called "America's most historic square mile"[3] because of the proximity to historic landmarks such as Independence Hall and the Liberty Bell. 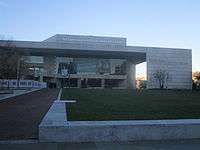 The National Constitution Center Board of Trustees appointed law professor, legal commentator and former visiting scholar Jeffrey Rosen to serve as President and Chief Executive Officer of the Center and Rosen started at the Center in June, 2013.[4]

The center was created by the Constitution Heritage Act in 1988.[5] Approved on September 16, 1988, and signed by President Ronald Reagan,[6] the act defined the National Constitution Center as "within or in close proximity to the Independence National Historical Park. The Center shall disseminate information about the United States Constitution on a non-partisan basis in order to increase the awareness and understanding of the Constitution among the American people."

The center is located at 525 Arch Street—an address chosen because May 25 (5/25) was the date that the Constitutional Convention began in Philadelphia in 1787 as shown in Timeline of drafting and ratification of the United States Constitution.

The architectural firm of Pei Cobb Freed & Partners designed the center,[7] and Leslie E. Robertson Associates are the structural engineers for this project. Critic Witold Rybczynski of The New York Times wrote, "Quiet but assertive, respectful of its surroundings, considerate of its public, this building is destined to take its place among the nation's leading public monuments."[8]

The first exhibit is Freedom Rising, a 17-minute, 360-degree theatrical production in the Sidney Kimmel Theater. The production traces the American quest for freedom.

"The Story of We the People" exhibit, in the Richard and Helen DeVos Exhibition Hall, is an interactive exhibition highlighting the history of the Constitution through more than 100 hands-on and multimedia exhibits.

The Signers' Hall is a stylized evocation of the Assembly Room in the Pennsylvania State House (today called Independence Hall) where the signers of the Constitution met on September 17, 1787. The room is occupied by life-sized bronze statues.

The Bill of Rights is displayed alongside a first edition Stone Engraving of the Declaration of Independence and a rare copy of the first public printing of the U.S. Constitution in the brand new George H.W. Bush Gallery. The exhibition runs from December 2014 – December 2017.[9]

Headed to the White House is the only exhibit of its kind, uniquely created to engage students, teachers and families with the election season. Using the U.S. Constitution as its launch pad, this hands-on exhibit takes visitors from the campaign trail to Inauguration Day all in one visit. This exhibition runs February 12, 2016 through Election Day, 2016

Through its Annenberg Center for Education and Outreach, the Center offers onsite and online civic education programs as well as a study center that develops and distributes teaching tools, lesson plans and resources.[10]

In September 2006, the center helped launch Constitution High School, a college preparatory, city-wide admission school and "the only Philadelphia School District high school whose theme is Law, Democracy, and History."[11]

In 2006, the center became the home of the Liberty Medal, an annual award established in 1988 to recognize those "men and women of courage and conviction who strive to secure the blessings of liberty to people around the globe."[15] Liberty Medal recipients have included Hillary Clinton, Muhammad Ali, George H.W. Bush, Bill Clinton, Bono, Mikhail Gorbachev, Nelson Mandela, Steven Spielberg, Tony Blair and Dr. Robert M. Gates.[16]

On March 18, 2008, Senator Barack Obama delivered a speech on race issues entitled "A More Perfect Union" at the Center, while campaigning for the presidency.

The U.S. flag hanging in the center's Grand Hall Overlook has traveled around the U.S. and flown over every state and territory capitol. Before the center's official opening, it was hung at the center by Muhammad Ali in a Flag Day ceremony on June 14, 2003.

"At the other end of the mall sparkles a modernist jewel of America's civic life, the National Constitution Center" – George Will, The Washington Post[18]

"Since opening in 2003, [the National Constitution Center] has put forward a vision of constitutional history both left and right have embraced."— The New York Times[19]

"The National Constitution Center has established itself as one of the city's cultural celebs, attracting a million visitors a year, putting pizzazz into civic and educational offerings, hosting blockbuster exhibitions, and attracting the nation's intellectual cognoscenti and media elite like bears to honey."— The Philadelphia Inquirer [20]