Quintus Ennius (/ˈkwɪntəs ˈɛniəs/; c. 239 – c. 169 BC) was a writer during the period of the Roman Republic, and is often considered the father of Roman poetry. He was an Oscan (a linguistic group of peoples who lived in parts of central and southern Italy) from Calabria (the ancient name for the Salento, the peninsula which forms southern Apulia).[1] Although only fragments of his works survive, his influence in Latin literature was significant, particularly in his use of Greek literary models. 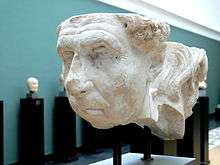 Ny Carlsberg Glyptothek Copenhagen. Double herm with the portrait of the Roman poets Virgil or Ennius

Ennius was born at Rudiae, a predominantly Oscan town[2] historically founded by the Messapians. Here Oscan, Greek, and Latin languages were in contact with one another; according to Aulus Gellius 17.17.1, Ennius referred to this heritage by saying he had "three hearts," Greek, Oscan and Latin (Quintus Ennius tria corda habere sese dicebat, quod loqui Graece et Osce et Latine sciret).

Ennius continued the nascent literary tradition by writing praetextae, tragedies, and palliatae, as well as his most famous work, a historic epic called the Annales. Other minor works include the Epicharmus, the Euhemerus, the Hedyphagetica, and Saturae.

The Epicharmus presented an account of the gods and the physical operations of the universe. In it, the poet dreamed he had been transported after death to some place of heavenly enlightenment.

The Euhemerus presented a theological doctrine of a vastly different type in a mock-simple prose style modelled on the Greek of Euhemerus of Messene and several other theological writers. According to this doctrine, the gods of Olympus were not supernatural powers still actively intervening in the affairs of men, but great generals, statesmen and inventors of olden times commemorated after death in extraordinary ways.

The Hedyphagetica took much of its substance from the gastronomical epic of Archestratus of Gela. The eleven extant hexameters have prosodical features avoided in the more serious Annales.

The remains of six books of Saturae show a considerable variety of metres. There are signs that Ennius varied the metre sometimes even within a composition. A frequent theme was the social life of Ennius himself and his upper-class Roman friends and their intellectual conversation.

The Annales was an epic poem in fifteen books, later expanded to eighteen, covering Roman history from the fall of Troy in 1184 BC down to the censorship of Cato the Elder in 184 BC. It was the first Latin poem to adopt the dactylic hexameter metre used in Greek epic and didactic poetry,[3] leading it to become the standard metre for these genres in Latin poetry. The Annals became a school text for Roman schoolchildren, eventually supplanted by Virgil's Aeneid. About 600 lines survive. A copy of the work is among the Latin rolls of the Herculaneum library.

Ennius was said to have considered himself a reincarnation of Homer.[4] Early in the poem Homer appears to the narrator, claiming that Ennius now has Homer's soul, which has also once been a peacock (frr. 4-14 Warmington, scholia to Perseus 6.9-11).