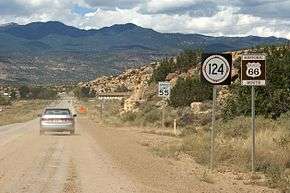 It is one of the roads on the Trails of the Ancients Byway, one of the designated New Mexico Scenic Byways.[2]

Route 66 in New Mexico was marked over portions of two auto trails — the National Old Trails Road from Arizona via Albuquerque and Santa Fe to just shy of Las Vegas, and one of the main routes of the Ozark Trails network from that point into Texas.[3] The state had taken over maintenance of these roads under several numbers: NM 6 from Arizona to Los Lunas, part of NM 1 through Albuquerque and Santa Fe to near Las Vegas, NM 56 to Santa Rosa, the short NM 104 to Cuervo, and part of NM 3 to Texas. While NM 56 and NM 104 were completely absorbed by US 66, NM 6 was reassigned to a route splitting from US 66 (old NM 6) at Laguna and heading straight east through Albuquerque, Moriarty, and Palma to US 66 at Santa Rosa. Except between Albuquerque and Moriarty, where it formed part of US 470, this was an unimproved road.[4][5][6]

New Mexico had long been controlled politically by the Santa Fe Ring, a group of businesspeople and officials with close ties to the Republican Party. In 1924, Democrat Arthur Thomas Hannett was unexpectedly elected for a single term (1925–1927) as governor, only to be defeated with various dirty tricks in the next election. Blaming the Republican establishment in Santa Fe for his defeat, Hannett used the lame duck remainder of his term to force through a sixty-nine mile cutoff from Santa Rosa directly to Albuquerque, bypassing Santa Fe entirely. The hastily constructed new road opened January 3, 1927, while incoming governor Richard Dillon was still trying to get construction stopped.[7] Dillon was replaced by Arthur Seligman, a Democrat, in 1931.

This new NM 6 was approved as a future realignment of Route 66 by 1932, and in 1933, a new bridge over the Rio Puerco opened. Once paving was completed in 1937, with AASHO approval given on September 26, 1937,[8] Route 66 was moved to this shorter route, known as the Laguna Cut-off west of Albuquerque and the Santa Rosa Cut-off east of Albuquerque.[9] The bypassed roads became NM 6 once again to the west and part of US 84 to the east.

From the Arizona state line to the Grants area the landscape is mountainous, and US 66 meanders around I-40. It also passes through some Indian reservations. At Laguna, New Mexico is the Laguna Indian Pueblo.[10]

At Mesita, the highway originally followed what is now NM 6 to east of I-25 at Los Lunas. It passed through Albuquerque from south to north along Fourth Street, part of the historic El Camino Real de Tierra Adentro (El Camino Real). The highway is now replaced with I-25 through Santa Fe to, almost, Las Vegas (Historic 66 turns south before reaching Las Vegas), though several old sections exist which are barely (if at all) driveable. From south of Las Vegas back to I-40, the road has been replaced with US 84.[11]

The later, and more popular, alignment, continued straight west to Albuquerque, becoming Central Avenue through the city. While the former US 66 through Albuquerque is now owned and maintained by the city of Albuquerque, a few US-66/BUSINESS I-40 signs remain along Central Avenue in the downtown area. East of Albuquerque, US 66 is now NM 333 all the way to Moriarty. I-40 east of Moriarty to Santa Rosa was built by adding a second set of lanes to US 66. East of Santa Rosa, US 66 is now largely frontage roads for I-40 or business loops for Santa Rosa and Tucumcari. At San Jon, the original alignment (now gravel) continues to the Texas state line at the historic ghost town of Glenrio. A later alignment is the north frontage road for I-40.[12]

This route is based on the later alignment via Central Avenue in Albuquerque, bypassing both Santa Fe and Los Lunas. Much of this road was upgraded in place as I-40 or used as frontage road or business loops. 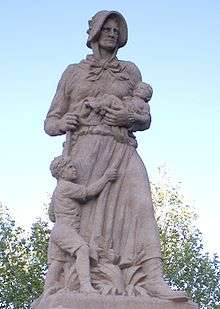 Madonna of the Trail, Albuquerque

The New Mexico Madonna of the Trail is one of a dozen monuments (one in each state on the National Old Trails Road) commemorating the hardships of early pioneer travellers. She stands on US 66 in Albuquerque.[14] Albuquerque is also home to the 1927 Art Deco themed KiMo Theater[15] and the first modern suburban shopping mall in New Mexico, Nob Hill.[16]

Fort Wingate, an abandoned military installation east of Gallup, traces its history to attempts in the 19th century to forcibly displace Navajo to native reservations. It later served as a line of defence against the Apache. Closed in 1912, it reopened briefly to house prisoners during both world wars.[17]

The Barelas-South Fourth Street Historic District is a collection of commercial buildings from various eras in a formerly Hispanic residential neighbourhood in Albuquerque. Eras represented include the arrival of the Atchison, Topeka and Santa Fe Railway and the later construction of US 66.[18]

The Park Lake Historic District is a 25-acre municipal park on a lake in Santa Rosa. Constructed under the Works Progress Administration between 1934 and 1940, the park was a make-work project during the Great Depression.[19]

The historic Jones Motor Company building in Albuquerque, originally a motorcar dealership,[20] has been re-purposed to house the local Kelly's Brew Pub.

Richardson's Store in Montoya, a 1901 railroad town, initially provided provisions for Rock Island Railroad workers and ranchers.[21] When Route 66 came to town, the store carried groceries and auto supplies. It closed after I-40 bypassed the community.

Roy T. Herman's Garage and Service Station in Thoreau was moved in 1937 from Grants, where it had originally been established in 1935. The routing of Route 66 had moved, so the station moved with it to keep its Route 66 clientele.[22]

New Mexico is home to the Native American Pueblo of Santo Domingo (Kewa Pueblo) in Santo Domingo [23] and the Pueblo of Laguna in Laguna.[24] Roadside merchants on Route 66 often based their stores on the design of the early trading posts which originally served the native community.

Bowlin's Old Crater Trading Post, Bluewater has long been closed and vacant. Originally a native trading post, its proprietors established a modern chain of highway service centres.[25] Albuquerque's 1939 Maisel's Indian Trading Post, which once employed hundreds of native craftspeople, was reopened in the 1980s and remains in operation today.[26] 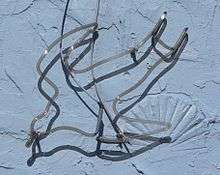 Tucumcari had long advertised "2000 motel rooms" (later "1200 motel rooms") on roadside signage for hundreds of miles along US 66 using the slogan "Tucumcari tonite!" At least one historically restored Tucumcari Boulevard motel, the 12-room neon-lit 1939 Blue Swallow Motel, is listed on the National Register of Historic Places.[27] Another motel recently restored nearby is the Motel Safari. The Motel Safari was built in 1959 by Chester Dohrer and features a mid-century modern retro design with "Doo Wop" or "Googie" styled architecture. Boomerangs, holes in cinder blocks, counter stacked bricks protruding from the façade and whimsical metal cylinders that light up at night, along with its famous camel atop the neon sign, paying tribute to the U.S. Camel Corps that once came through the area in the 1800s on a surveying expedition for a future national road system.

Central Avenue in Albuquerque has many motels from this era, although some (such as the Aztec Motel) have been demolished. Historic Albuquerque lodgings from Route 66's heyday include the Luna Lodge,[28] Tewa Motor Lodge,[29] De Anza Motor Lodge[30] and El Vado Auto Court.[31] Some of these motels are currently closed but are the target of local efforts to ensure their historic preservation.

The El Rancho Hotel in Gallup has been the temporary home of many movie stars.[32]

The Rio Puerco Bridge, a Parker Through truss bridge crossing the Rio Puerco, was built in 1933.[33] Eleven New Mexico road segments on US 66 are listed on the National Register of Historic Places; some originally incorporated wooden bridges to carry the road through flood plains. Listed road segments include: Glenrio to San Jon; San Jon to Tucumcari; Palomas to Montoya; Montoya to Cuervo; Cuervo to NM 156; Albuquerque to Rio Puerco; Laguna to McCartys; McCartys to Grants; Milan to Continental Divide; Iyanbito to Rehobeth; and Manuelito to the Arizona border.[34]