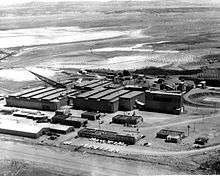 Nearby was the former Bluewater Mill, a uranium mill operated by Anaconda Copper from 1954 to 1982. The site was reclaimed in 1995, under the provisions of the Uranium Mill Tailings Radiation Control Act, and is monitored by the U.S. Department of Energy.[5]