Royal Borough of Kingston upon Thames

Districts in the borough

Kingston upon Thames, on the south bank of the River Thames has existed for many hundreds of years. Many Roman relics have been found in the surrounding areas. A church has stood on the site of All Saints' Church, in the centre of Kingston, for more than a thousand years. An earlier church was sacked by the Vikings in 1009 AD. Kingston was the site of the coronations of seven Anglo-Saxon monarchs:

The Coronation Stone, on which they are said to have been crowned stands outside the local council offices, the Guildhall. A coin from the reign of each of those kings is set into the base of the stone. 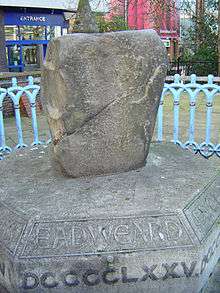 The borough was formed in 1965 by the merger and the transfer from Surrey to Greater London of the Municipal boroughs of Kingston-upon-Thames (which itself was a Royal Borough), Malden and Coombe and Surbiton.

The current name of the borough omits hyphens to distinguish it from the similarly named former municipal borough.

Kingston, administratively part of Greater London, contains County Hall, the seat of Surrey County Council, and except for the Kingston Vale area in the north-east which has a London SW15 postcode, was part of Surrey for postal purposes until postal counties were abolished in 1996.

The borough includes the whole of the Kingston and Surbiton Westminster Parliamentary Constituency and part of the Richmond Park Constituency, both constituencies were created in 1997. The previous constituencies re-arranged to form these two had been essentially Conservative.

Edward Davey overturned the previous Conservative majority of more than 10,000 in Kingston and Surbiton, to win by 56 votes after three recounts. He retained the seat in 2001 with a majority of 15,676 over the Conservative candidate David Shaw. In 2005 Davey's majority was 8,961 and in the May 2010 general election he again retained the seat with a slightly reduced majority, beating the Conservative candidate Helen Whately. In the 2015 general election, Davey's seat was taken by Conservative James Berry[3] with a majority of 2,834. Davey's was one of six Liberal Democrat losses in London and 49 overall as the party suffered its worst election results since its formation in 1988.[4]

The Guildhall in Kingston is the home of the Borough Council

A map showing the wards of Kingston upon Thames since 2002

Logo of the Kingston Council until 2014
See also: Kingston upon Thames local elections

The Borough Council was controlled by the Conservative Party from 1965 to 1986, when a short-lived SDP-Liberal Alliance minority administration took over. It lost several by-elections due to its attempt to abolish the Borough's grammar school system. The Conservatives regained control in 1987. The 1990 election gave no party a majority but the Conservatives kept power with the casting vote of the Mayor.

In 1994 the Liberal Democrats took the Council for the first time.

In 1998 the Liberal Democrats lost their majority on the Council and a minority Conservative Party administration was formed. This minority administration was weakened in 1999 by the expulsion of Tim Brown for expressing concerns about the leadership of the local Kingston & Surbiton Conservative Association. In 2001 St. Mark's ward Councillors Dennis de Lord and Jan Jenner resigned in protest at hypocrisy within the Conservative group on the Council. With Tim Brown they formed a new Independent Group of Councillors with Dennis de Lord as leader and Tim Brown as deputy leader, to put People Before Politics. This was the first time that four parties were represented on the council and the Mayor of Kingston Jeremy Thorn officially opened the new Independent Group's office at the Guildhall. The group did not stand for re-election following the continuing ill-health of Dennis de Lord.

At the 2002 elections, the Liberal Democrats took control of the Council with a majority of twelve seats and they retained control in 2006 with a majority of two. This was the first time any party had retained control of the Council since 1986. The only neighbourhood where the Liberal Democrats increased their majority was Surbiton, where they took control of Berrylands ward, ousting Kevin Davis the leader of the Conservative Group on the Council. Kevin Davis was subsequently replaced as the Conservative Prospective Parliamentary Candidate for Kingston & Surbiton by Helen Whately.

In 2007 Sheila Griffin, one of the two Labour Councillors, resigned the Labour whip and became an Independent.

In 2011, Councillor Tim Dennen resigned from the Liberal Democrat group to sit as an independent member.[5]

On Tuesday 11 June 2013 Derek Osborne was arrested on suspicion of possessing indecent images of children, following his release on bail he resigned the Liberal Democrat group, as leader of Kingston Council and as a councillor for Beverley Ward.[6] Osborne pleaded guilty and was subsequently jailed for 2 years in October 2013.[7]

The Conservatives comfortably won the by-election following the resignation of the former leader of the council dealing a significant blow to the local Liberal Democrats with a comfortable majority.[8]

In 2014 the Conservatives gained a majority of 8 at the local elections, bucking a trend of the Liberal Democrats retaining control in their heartlands.[9] 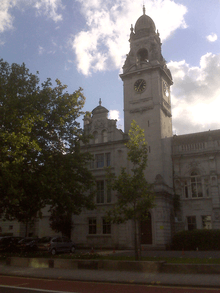 Modern day Kingston benefits from one of the biggest and most visited shopping areas outside of central London, with a varied selection of high street stores, and a large number of independent boutiques and retailers.

The most famous shop in Kingston is Bentalls, started by Frank Bentall in 1867 in Clarence Street, where it (or at least the completely rebuilt) Bentall Centre stands.

Close to Kingston, and located between Kingston, Richmond and Roehampton, is Richmond Park, one of the oldest of London's royal parks.

The borough is home to the highest number of South Koreans in Europe, in the town of New Malden.

Some of the borough's attractions are:

Sega Amusements International, responsible for the production of arcade games outside of Japan, has its head office in Chessington, Royal Borough of Kingston upon Thames.[10]

Sopwith Aviation Company had a factory in the Canbury Park area of Kingston, where the famous Sopwith Camel was produced during World War I. The Hawker Hurricane was designed in a site in Kingston town centre and built in the aviation factory near Ham now known as the Hawker Centre.

Primary responsibility for education in the borough lies with the local education authority.

Main article: List of schools in Kingston upon Thames

Kingston is one of five London Boroughs which have no London Underground station. It has no current connections with London Overground that serves adjacent Richmond or London Tramlink that serves Wimbledon in the neighbouring borough of Merton. It has nine South West Trains stations and two centrally located bus stations. In 2008, 64 bus routes served Kingston.

Coaching interests in Kingston opposed the plan of the London and Southampton Railway to run its line to Southampton near Kingston. The line consequently avoided the town with a station opened in 1838 southwest of the town; it was later resited to the present site of Surbiton station.

In 1863 a branch was built from Twickenham to a terminus in Kingston. That line was extended to the main line in 1869 to form the Kingston Loop Line.

All rail services in the borough are operated by South West Trains, who provide regular services to and from London Waterloo.

Railway stations in the borough:

The Kingston coat of arms displays three salmon and its shield is almost identical to the coat of arms of the Swedish municipality of Laholm. Both coats of arms can be traced back to the 16th century. The arms of the Norwegian town of Mandal is also similar, but more recent.

Although not officially 'twinned', The Royal Borough of Kingston has a partner city of Oldenburg in Germany and Gwanak-gu, an administrative subdivision of Seoul, in South Korea. Some road signs announce that Kingston is linked with Delft in the Netherlands but this official link has ended.[12]

The Borough of Kingston upon Thames has several football clubs in its area: