Worcester Park is a suburban town in south west London, covering both the extreme north-west of the London Borough of Sutton in Greater London (east of the railway line that runs through the area) and the northernmost part of the Borough of Epsom and Ewell in Surrey (west of the railway). The area is 10.2 miles (16.4 km) south-west of Charing Cross. The suburb's population was 16,031 at the time of the 2001 census. The suburb comprises the Worcester Park ward, an electoral area of the London Borough of Sutton with a population in 2011 of 11,655,[1] as well as the Cuddington ward, an electoral area of Epsom and Ewell, which had a population of 5,791 at the time of the 2001 census.[2]

The Worcester Park post town, which is coterminous with the KT4 postcode district, covers all of the suburb and also extends into the south-eastern periphery of the Royal Borough of Kingston upon Thames, covering most of the areas of Old Malden and Malden Green.

Beverley Brook runs through Worcester Park, alongside Green Lane and past Green Lane Primary School, traversing up to Cuddington Recreation Ground. Green Lane appears in the Domesday Book. The Huntsmans Hall (now The Brook.) was situated on what was the far boundary of a hunting ground for Henry VIII. 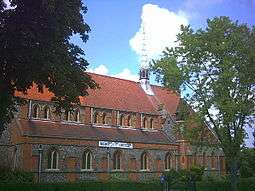 Worcester Park takes its name from the 4th Earl of Worcester, who was appointed Keeper of the Great Park in 1606. The area was once part of the Great Park which covered around 1100 acres and was adjacent to the Little Park which contained Nonsuch Palace of Henry VIII. Both parks were originally used as deer parks. Henry VIII had obtained the land from Sir Richard de Codington.

During the ownership by Sir Richard de Codington, there was a manor house on a site which was later replaced by Worcester House and is now the site of Worcester Close. There was also a church of St. Mary on roughly the same site where the church of St Mary the Virgin, Cuddington, now stands.

In 1809 Worcester Park was acquired by William Taylor. He used a mill on the banks of the Hogsmill Riverto continue the manufacture of gunpowder which had been carried out on and off in the area for several centuries. Manufacturing continued until the 1850s when the mill blew up.

In 1890 Worcester Park Baptist Church was formed in Longfellow Road. It moved to its present location on The Avenue in the 1950s.

Cheam Common Infants and Junior schools are pre-World War II school buildings. Air raid shelters were found underground during an extension to the main building of the junior school. The school is located at the top of the high street. 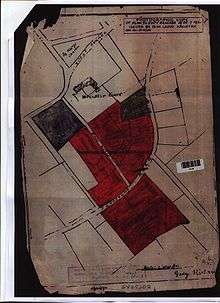 Blakesley School was a private primary school run by the Headmaster Eric Dudley. It closed in the summer of 1958, when the land was sold for housing. It occupied the land at grid reference TQ214654 bordered by the portion of Delta Road which was then not surfaced, Delta Close (then a gated track and public right of way leading from Delta Road to Salisbury Road), and Grafton Avenue, again not surfaced, heading towards the church. It occupied a substantial plot of land and was a "modern manor house" style building referred to on local maps as Worcester Court. The surrounding wall is said to go back to Henry VIII's reign.

Possibly belonging to T Parker & Sons, Landscapers, who were based at what is now a housing estate at grid reference TQ221662 beside Worcester Park Station, Parker's Field was a popular toboggan run until a housing estate was built on a large part of it in the 1970s (despite being Green Belt).

The Scout HQ next door to Cuddington Primary School in Salisbury Road at grid reference TQ215650 was built in 1958 and named Rowe Hall in honour of a long serving scout mistress, "Miss Rowe", who was a teacher at Blakesley School. This headquarters was erected after the previous building was destroyed by arsonists and still serves the 2nd Cuddington (Rowe) Scout Group.

In the 1950s, the ruins of a splendid ornamental lake with a multi-arched bridge (at grid reference TQ211654) and balustrade were still visible in the woodland at the foot of the hill in "Parker's Field" (situated between Grafton Road and Old Malden Lane, and behind the still rather ramshackle stables in Grafton Road).

The house itself was not visible, nor were there any ruins apart from the lake and some mounds of bricks to be found. The lake itself had drained into the Hogsmill River, but no source of incoming water was visible. The lake dried up in the late 1940s following the rechannelling of the river.

Close to the bridge remnant to the south-west of the bridge was a ruined domed structure, all that remains of an ice house. However, it was filled with soil and other débris which prevented any investigation.

Documents from H M Land registry show that the name of the building for Blakesley School was Worcester Court.

Worcester Park is the site of the enormous launch structure built to pioneer manned flight in the short story The Argonauts of the Air by H. G. Wells written in 1895.[4]

Central Road, roughly half a mile in length forms the focal point of Worcester Park. It hosts a number of shops, banks, estate agents, building societies, solicitors, restaurants, pubs and coffee bars. These include both multiples and independents. The largest store is a branch of Waitrose.

Along with neighbouring North Cheam, Worcester Park is a beneficiary of the Mayor of London's "Outer London Fund".[5] See section below.

During 2011/12 Worcester Park and neighbouring North Cheam won nearly £2m from the Mayor of London’s Outer London Fund for improvements to the local area. Sutton Council has begun a collaborative project, steered by Councillors and community stakeholders, to spend the money on making improvements to the public realm and supporting the development and growth of businesses in the town centres.

Sutton Council’s bid for the money stated that: "In The London Plan, London's Mayor recognises the strategic importance of supporting town centres as key locations for a diverse range of activities. Town centres are key nodes for effective land use and transport integration, a focus for local communities, enhance quality of life, and are key focal points for regeneration initiatives. Both Worcester Park and North Cheam are recognised as part of a network of District Centres in London by the Mayor. In this way, they play an important role in the Borough [of Sutton]. Their development is also strategic: the long term growth strategy for Sutton identified in Sutton's Core Strategy, identifies both as ‘Centres for Intensification’ where renewal will largely be achieved through residential and mixed use development." It also notes that: "Network Rail are willing to build on plans to make enhancements to Worcester Park Station, working with the Council to make a welcoming and distinctive arrival to Worcester Park."[6]

The Hamptons and Mayflower Park 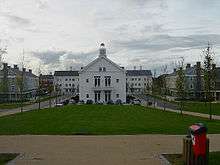 The Hamptons, view from part of main parkland belt 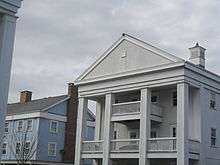 The Hamptons is an early 21st century St James Homes estate of mainly New England (Colonial Revival) style housing in the north-east of Worcester Park.[7] It lies within the London Borough of Sutton. It was constructed in 30 acres (120,000 m2) of parkland on the former site of sewage works and its formerly bracken buffer, by the sports field buffers of Motspur Park and existing residential streets of Worcester Park. The site has with appropriate civic engineering been converted to a conservation wetland, amphitheatre, community centre and gym, tennis courts (for residents) and a viewing platform with views to the City of London and c. 1000 homes: apartments to large detached houses. Dutch style/Dutch Colonial Revival houses were added towards the end of re-engineering, landscaping and construction in the ten years to 2013.

The green space itself is called Mayflower Park which includes a grass amphitheatre for performances and an area of five wetlands as a nature reserve.[8] The official public opening of the park was at the end of July 2006.[9]

Worcester Park railway station is in Zone 4, served by the National Rail services of South West Trains and is on the boundary with the Royal Borough of Kingston upon Thames. Worcester Park station is a Category C station (provides important rail feeder services on a busy trunk route with between £2m and £20m in ticket revenues per annum).

The railway line runs from London Waterloo, via Wimbledon and Worcester Park to Epsom, Dorking and Guildford. Worcester Park is approximately a 25-minute journey to London Waterloo by train with trains typically running every 15 minutes during the day, with additional services during morning and evening peak periods.

There are plans to improve station facilities and rail services at Worcester Park during 2012-13. Network Rail has notified Kingston council of its intention to extend the length of platforms at Worcester Park Station. This will allow extra passenger capacity as trains can be increased from 8 carriages to 10 in length.[12]

There was a petition in early 2014 to get Crossrail 2 to stop at Worcester Park railway station.[13]

Also, under the Department for Transport’s Access for All scheme - a disabled access fund to create obstacle-free routes to, from and between trains – Worcester Park station will be made accessible to wheelchair users and those with pushchairs etc. on both platforms, including the construction of a new footbridge.[14]