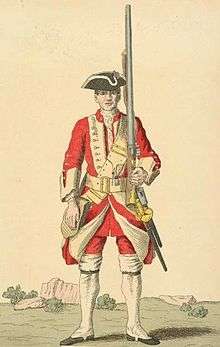 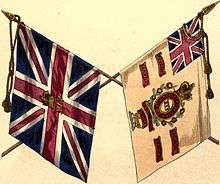 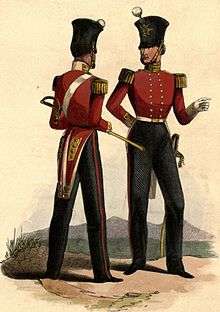 The regiment was raised by Sir Edward Hales in 1685, by order of King James II. One of the nine new regiments of foot, raised to meet the Monmouth rebellion it was termed Hales's Regiment.[1] The regiment served in Flanders between 1693 and 1696 and gained its first battle honour at Namur in 1695.[2]

1715 saw the regiment moved to Scotland to fight the Jacobite risings.[3] In 1727 the regiment played a major part in defending Gibraltar against the Spanish, where it remained garrisoned for the next 15 years.[4] 1745 saw the regiment in Flanders fighting at Fontenoy before being recalled to Scotland to fight the '45 Rebellion.[5] Fighting at Falkirk and Culloden,[6] it became the 14th of Foot in 1751.[7] The regiment returned to Gibraltar in 1751 for another 8-year stay.[8] In 1759, when stationed at Windsor, it was granted royal permission to wear the White Horse of Hanover signifying the favour of the King.[9]

In 1766, the regiment left Portsmouth for North America and was stationed in Nova Scotia.[10] In 1770 the 14th although at the ready in their barracks did not play a part in the Boston Massacre. Captain Thomas (29th Foot) was the officer of the day in charge of the duty detail (29th of Foot) that faced the crowds outside of the Customs House. The crowd that gathered began taunting the detail until a shot, then volley was fired into the crowd, three civilians were killed outright and two more died later. Captain Preston and the detail went to trial and were defended (successfully) by Lawyer John Adams thus ending tensions between the crown and the citizens of Boston for the time being. The 14th would remain part of the Boston Garrison until 1772.[11]

In 1772, the 14th arrived in St Vincent as part of the force to subjugate the maroons. Due to bush fighting and disease the regiment was depleted in numbers, it stayed for two years and was then scheduled to return to England in 1774. Due to the rising tensions in the colonies the regiment's return was cancelled and instead it was redeployed piecemeal, under Major Jonathan Furlong to St. Augustine, Florida and Providence Island in the Bahamas.[10]

At dawn on 1 January 1776, the fleet opened fire on Norfolk. Between the firing (burning) of the buildings and the fleet firing on the town, Norfolk burned for three days, 863 buildings were destroyed. After the fleet left, the rebels reoccupied what remained of the town but soon decided to burn even that to keep Lord Dunmore from using it. After all was said and done, 1,298 buildings were destroyed and the 5th largest city in colonial America ceased to exist.[12]

After Norfolk, the fleet left for Turkey Point near Portsmouth where it would base operations. While at Turkey Point there were a series of small raids and skirmishes. The fleet would stay at Turkey point only until late May when it would leave for Gwynn's Island. In August, the fleet withdrew from the Chesapeake and headed to New York. The 14th was withdrawn from service, it being severely under strength from disease and battle in both the Caribbean and Virginia. In New York the remaining men of the regiment were used to supplement other regiments in the area. The officers were sent back to Britain to recruit a new regiment.[13]

In 1777, while in training in England, one company each of the 14th and the 15th regiments were placed under the command of Col. Patrick Ferguson and sent to America to test the concept of the rifle company with the Colonel's new rifle. The rifle companies fought well at the battle of Brandywine in Pennsylvania on 11 September. After the experimental rifle companies returned to England they were made the light companies of their respective regiments; thus ended the 14th Regiment's participation in the American Revolution.[14]

In 1782 the 14th was named The 14th (Bedfordshire) Regiment. The arrival of the French Revolution and the subsequent French invasion of the Low Countries caused troops to be sent to protect trade interests. The 14th gained its second battle honour around Lille. In 1793 at the battle of Famars in Flanders the 14th became the only regiment ever to win its regimental march in battle, the French revolutionary song “Ça Ira”.[15] They returned to England in 1795, then the Regiment was posted to the West Indies where it was on duty until 1803. In February 1797 the regiment participated in the bloodless invasion of Trinidad.[16] 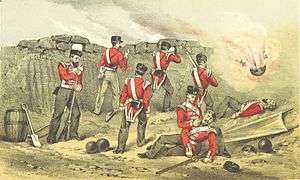 The outbreak of the Napoleonic Wars in 1803 led to the expansion of the British Army. The 14th formed a second battalion in Belfast in 1804, and a third battalion in 1813. The 1st Battalion spent much of the war on garrison duty in Bengal. In 1809 the Regiment was re-titled The 14th (Buckinghamshire) Regiment.[7] The 1st Battalion served in India for 25 years until 1831. During this period the 1st Battalion took part in campaigns against the French in Mauritius in 1810, and the Dutch in Java in 1811, with Java adding another Battle Honour.[17]

The 14th then was posted to the West Indies, Canada and Malta. In 1855 the Regiment served in the Crimean war. In 1876 the Prince of Wales presented new Colours to the 1st Battalion and conferred on the 14th the honoured title of The Prince of Wales's Own. A second battalion was again raised in 1858 and took part in the New Zealand Wars and the Second Anglo-Afghan War.[21]

During 1880 the British army saw major changes, The Childers Reforms. The 14th was given the title The Prince of Wales's Own (West Yorkshire Regiment).[22] The Depot of the 14th was established at Imphal Barracks in York.[23]

1899 saw the 2nd Battalion sent to the Second Boer War 1899-1902 in South Africa and after a number of engagements two members of the Battalion were awarded the Victoria Cross: Captain (later Colonel) Mansel-Jones in February 1900,[24] and Sergeant Traynor in February 1901.[25] The 4th (Militia) Battalion was embodied in December 1899, and 500 officers and men left for South Africa in February 1900.[26] The 1st, 2nd and 3rd Volunteer Battalions sent service companies to the Boer War and were granted the battle honour South Africa 1900–02.[27][28] 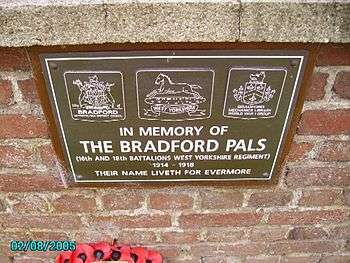 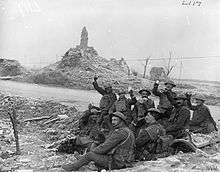 Men of a pioneer battalion of the West Yorkshire Regiment, possibly the 21st (Service) Battalion (Wool Textile Pioneers), having a meal in a shell hole on the roadside near Ypres, Belgium, 23 December 1917. 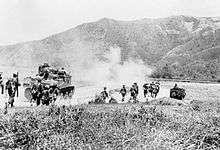 Men of the West Yorkshire Regiment and 10th Gurkha Rifles advance along the Imphal-Kohima road behind Lee-Grant tanks, July 1944 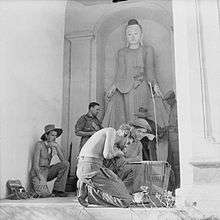 Battalion HQ of 1st West Yorkshire Regiment in a temple near Meiktila, 28 February 1945. 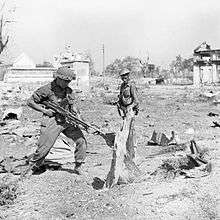 In 1937 the 6th Battalion became 49th (The West Yorkshire Regiment) Anti-Aircraft Battalion of the Royal Engineers, converting to a searchlight regiment of the Royal Artillery in 1940.[27][32]

Both the 1st and 2nd battalions of the West Yorks served in the Far East throughout the Burma Campaign, fighting in the British Fourteenthth Army. The 2nd Battalion served with the 9th Indian Infantry Brigade from November 1940.[34]

In 1942 2/5th Battalion West Yorkshire Regiment was converted to armour, becoming 113th Regiment Royal Armoured Corps. As with all infantry battalions converted in this way, they continued to wear their West Yorkshire cap badge on the black beret of the RAC.[35]

51st (Leeds Rifles) Royal Tank Regiment, formed as a 2nd Line duplicate of 45th (Leeds Rifles) Royal Tank Regiment (previously the 7th (Leeds Rifles) Battalion of the West Yorks), served in 25th Army Tank Brigade in the Italian campaign under the command of Brigadier Noel Tetley of the Leeds Rifles, who was the only Territorial Army RTR officer to command a brigade on active service. The regiment distinguished itself in support of the 1st Canadian Infantry Division in the assault on the Hitler Line in May 1944. At the request of the Canadians, 51 RTR adopted the Maple Leaf as an additional badge, which is still worn by its successors, the Leeds Detachment (Leeds Rifles), Imphal (PWO) Company, The East and West Riding Regiment.[33]

In 1948 the 1st and 2nd Battalions were amalgamated and were stationed in Austria. They then moved to Egypt and on to Malaya. After a tour of duty in Northern Ireland in 1955-56, the 1st Battalion took part in the Suez Operation and was then stationed in Dover until the amalgamation in July 1958.[36]

The regiment's battle honours were as follows:[7]

The following members of the Regiment were awarded the Victoria Cross:

Colonels of the Regiment

Colonels of the regiment included:[7]

The 14th (Buckinghamshire) Prince of Wales's Own Regiment

The Prince of Wales's Own (West Yorkshire Regiment)

The West Yorkshire Regiment (The Prince of Wales's Own)