In 1702 a regiment of marines was raised in the West Country by George Villier (not related to the Villiers that became the Duke of Buckingham). It was named Villier's Marines.[1] Villier was drowned in 1703, and the regiment was taken over by Alexander Luttrell.[2] After Luttrell's death in 1705, the command went to Joshua Churchill until 1711[3] when it became Goring's Regiment (at this time regiments took the name of their colonel).[4]

The Barracks, Kingston upon Thames

The 2nd Battalion on the other hand was in action soon after formation, being part of the British expedition to the Sudan in 1884. This battalion also took part in the Anglo-Boer War: they took part in the Battle of Colenso in December 1899, the Relief of Ladysmith in February 1900, the Battle of the Tugela Heights later in February 1900 and the Battle of Laing's Nek in January 1881.[11] After South Africa the battalion was shipped to India in 1903 where they remained until the outbreak of the First World War.[10] 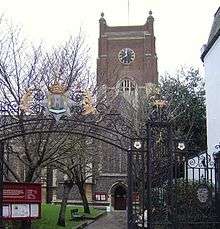 On 4 August 1914, the 1st Battalion, East Surrey Regiment was in Dublin. Eleven days later, mobilization completed and at full war establishment, the 1st Battalion landed at Le Havre in France, and before the end of the month was in action against the Germans. The battalion was assigned to the 14th Brigade, 5th Division, part of the original British Expeditionary Force (BEF).[13] During the Retreat from Mons and afterwards, the Battalion took part in the great battles of 1914, Le Cateau, the Marne and the Aisne.[14] In 1915, after the Battle of La Bassée, the 1st Surreys withstood a most determined attack on Hill 60, near Ypres.[14] In the desperate fighting which ensued, the Battalion won three Victoria Crosses and seven Distinguished Conduct Medals. Among the VCs was Lieutenant George Roupell,[15] who later became the last Colonel of the East Surrey Regiment.[16] In late 1915 the brigade was transferred to the 32nd Division. In 1916, the 1st Battalion took part in the great battles of the River Somme, and distinguished itself notably at Morval in September. The Battalion took part in many of the great battles of 1917, such as Arras, the Third Battle of Ypres. After a four-month tour on the Italian Front, the Battalion was back in France in March 1918, and was engaged in the Battles of Albert and Bapaume, and the subsequent advance to victory.[17]

The 2nd Battalion returned from India at the outbreak of war, but it was not until January 1915 that it arrived in France with the 85th Brigade, 28th Division.[13] It was soon in action to the south of Ypres where it lost many men, some by poison gas: the battalion lost some 800 troops out of about 1,000.[14] The 2nd Battalion took part in the Battle of Loos in September 1915, and fought valiantly in the defence of the Hohenzollern Redoubt.[14] At a vital stage in this battle, Lieutenant Arthur Fleming-Sandes, though wounded, displayed exceptional courage and leadership, for which he was later awarded the Victoria Cross.[18] The following month the Battalion was transferred to the Salonika Expeditionary Force, and spent the remainder of the War on the Struma Valley Front and east of Lake Doiran. The battalion saw action at the Battle of Doiran in January 1918.[17]

The 1/5th and 1/6th battalions, East Surrey Regiment were not to see service on the Western Front. Both battalions were part of the Surrey Brigade, alongside the 4th and 5th West Surreys, and attached to the Home Counties Division.[13] They embarked for India in October 1914 and were employed on garrison duties in the United Provinces and the Punjab for two years. The 1/5th Battalion then joined the Mesopotamian Expeditionary Force in December 1917 and took part in the operations on the Tigris, while the 1/6th Battalion left India in February 1917 for a twelve-month tour of duty with the Aden Field Force.[13]

The 7th (Service) Battalion landed at Boulogne-sur-Mer as part of the 37th Brigade in the 12th (Eastern) Division in June 1915 for service on the Western Front.[13] The battalion fought at the battles of Loos, the Somme, Albert and Arras.[14]

The 8th (Service) Battalion landed at Boulogne-sur-Mer as part of the 55th Brigade in the 18th (Eastern) Division in July 1915 also for service on the Western Front.[13] The battalion fought at the Battle of Loos and the Battle of the Somme.[14] One particular incident will always be remembered. On the first day of the Battle of the Somme, 1 July 1916, B Company of the 8th Battalion went into the attack dribbling two footballs which the Company Commander, Captain Wilfred Nevill, had bought for his platoons to kick across No Man's Land. Captain Nevill and many of his men were killed during the advance, but the 8th Surreys were one of the few battalions to reach and hold their objective on this day. The ‘Football Attack’ caught the imagination of the country, and illustrations of it are shown in the Regimental Museum, which also contains one of the footballs used. On that day, the 8th Battalion won two DSOs, two MCs, two DCMs and nine MMs, but 446 officers and men were killed or wounded.[14] 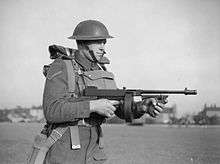 The 1st Battalion, East Surrey Regiment was a Regular Army unit based in England at the outbreak of the Second World War in September 1939. The battalion was part of the 11th Infantry Brigade, which also included the 2nd Battalion, Lancashire Fusiliers and 1st Battalion, Ox and Bucks Light Infantry, and was attached to the 4th Infantry Division and was sent to France with the British Expeditionary Force (BEF) in October. After returning to the United Kingdom after the Battle of Dunkirk and evacuation from Dunkirk in May–June 1940 the 1st Battalion was reformed and spent the next two years on home defence expecting a German invasion.[19] In June 1942 the battalion was reassigned, with the rest of the 11th Brigade, part of the newly raised 78th Battleaxe Infantry Division, with which it remained for the rest of the war. It took part in Operation Torch in November 1942, landing in North Africa at Algiers with the British First Army.[19] Following this the battalion fought with the division in Tunisia until the end of the Tunisia Campaign in May 1943. During this time it took part in notable actions such as Ochsenkopf offensive, Longstop Hill and Tebourba.[19] 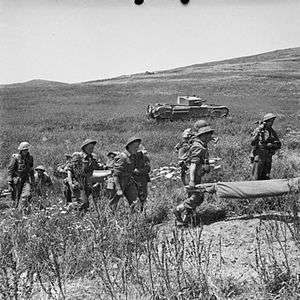 Men of the East Surrey Regiment bring in wounded during the attack on Longstop Hill. Churchill tanks of the North Irish Horse are in the background

After North Africa the British First Army was disbanded and 78th Division became part of the British Eighth Army. The battalion then fought in Sicily during the invasion before moving to Italy for the Italian Campaign where it had notable involvement in the Battle of Termoli and the fighting on the Barbara Line and River Sangro during the autumn of 1943.[20] In February 1944 78th Division was switched to the Cassino sector. The battalion initially held positions on the River Rapido south of Cassino but by March had been moved into bleak and exposed positions in the mountains north of the town. In late April they were relieved and after a brief rest took part in the fourth and final battle of Monte Cassino in May 1944.[19] They were then involved in the pursuit after the Allied breakthrough. They fought a hard engagement at Lake Trasimeno on the Trasimene Line in June 1944 before being withdrawn with the rest of the division in July to Egypt for rest and training.[21]

The 1st East Surreys returned with 78th Division to Italy in September 1944 in time to take part in Operation Olive and the fighting in the Apennine Mountains during the winter of 1944 and occupying positions on Monte Spaduro when the front became static. In February 1945 the battalion came out of the front line to prepare and train for the offensive planned for the spring. By late March the whole division was in place on the banks of the Senio river ready for the start of the spring 1945 offensive which started on 6 April. The battalion fought in the intense action at the Argenta Gap before advancing with the rest of the division to the north of the Gulf of Venice and crossing the Italian border to finish the war in Austria.[20] 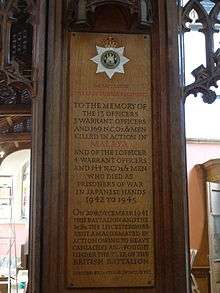 Memorial in All Saints, Kingston to the 2nd and the men it lost in the Malayan campaign and as prisoners afterwards

In 1940 the 2nd Battalion was shipped from China to Malaya where it was attached to 11th Indian Infantry Division based in North West Malaya. In December 1941 the Japanese Army invaded Malaya after landing in southern Thailand. The 2nd East Surreys suffered tremendous casualties during the defence and retreat from this part of Malaya. The battalion was amalgamated with the 1st Battalion, Leicestershire Regiment to form the British Battalion on 19 December 1941. This unit fought gallantly throughout the rest of the short campaign until the surrender of the British Army at Singapore in February 1942.[22]

In May 1942 the 2nd Battalion was reformed in the United Kingdom from the redesignation of the 11th Battalion, a hostilities-only battalion raised in 1940 that joined the 184th Infantry Brigade, 61st Division. It did not see further action in the Second World War.[23] 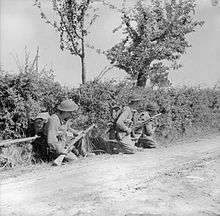 Men of the 1/6th Battalion, East Surrey Regiment crouch beside a hedge during fighting near Gioiella, Italy, 29 June 1944.

The 1/6th Battalion, East Surrey Regiment was a Territorial Army (TA) originally the 6th Battalion until 1939 when it was split in two and formed a 2nd Line duplicate, the 2/6th Battalion, when the TA was doubled in size and each unit was ordered to a 2nd Line duplicate. The 1/6th were deployed with the 132nd Infantry Brigade, part of the 44th (Home Counties) Infantry Division, to France in April 1940, becoming part of the British Expeditionary Force (BEF). The battalion was exchanged in 132nd Brigade for the 1st Battalion, Queen's Own Royal West Kent Regiment, making the brigade an all West Kent formation, and transferred to the 10th Infantry Brigade, 4th Infantry Division, as part of official BEF policy to integrate the Regular and Territorial Armies. The 1/6th fought alongside the 1st Battalion in the Battle of Belgium and were evacuated at Dunkirk. The 1/6th continued to see active service with the 1st Battalion in North Africa in March 1943 and took part in the Tunisian Campaign.[24]

The 2/6th Battalion were formed in 1939 as part of the doubling of the Territorial Army. The battalion was assigned to the 37th Infantry Brigade, alongside the 6th and 7th Royal Sussex, part of 12th (Eastern) Infantry Division. They were deployed to France in April 1940 with the BEF as a line of communications unit and almost immediately became involved in the Battle of France[25] and the defence of the Channel ports. They were ordered to take up a defensive position on the River Béthune as part of the support group for the 1st Armoured Division.[26] Separated from the rest of the BEF, they were outside of the encirclement of and evacuation from Dunkirk. Beaten back to the coast, along with the 51st (Highland) Infantry Division the division were forced to surrender to Rommel on 12 June 1940 at Saint-Valery-en-Caux. About 95% of the Battalion were captured or killed, the majority becoming prisoners of war including commanding officer Major D G Adams.[25] Many of those captured were subsequently imprisoned in Poland at Stalag XX-B[27] and Stalag XXI-D[28] After St. Valery, the battalion was reformed in England under Norman Brading [29] but did not see further active service.[30] The battalion was placed in 'suspended animation' in July 1946.[31]

The 2nd Battalion was disbanded in 1948 and its personnel joined the 1st Battalion. In 1959 the East Surreys were amalgamated with Queen's Royal Regiment (West Surrey) to form The Queen's Royal Surrey Regiment.[23]

The regiment's battle honours are as follows:[12] 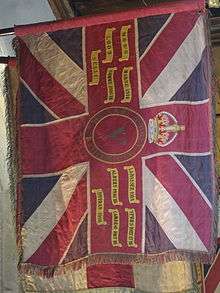 Colours, in All Saints church, Kingston