Not to be confused with Saint Anselm Abbey in Goffstown, New Hampshire. 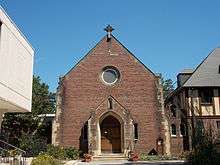 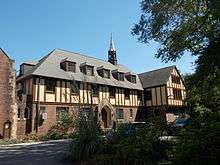 In the early 1920s, a group of Americans under the direction of Fr. Thomas Verner Moore purchased a tract of land on Sargent Road, and in 1923, Saint Anselm's Priory was born. The house was formed under the sponsorship of Fort Augustus Abbey in Scotland, which provided monastic training and sponsorship for the new priory. It was named after St. Anselm of Canterbury, the eleventh-century archbishop and theologian best known for his ontological argument for the existence of God. Initially, the monks were housed in an old farmhouse; the first church/monastery was built on a hill above South Dakota Avenue at 14th Street in 1930. A major addition was made to the monastery building in 1960 to accommodate the growing number of monks.

In 1942, the monks opened the Priory School, and they became wholly dedicated to teaching at their own school. As the number of monks increased, the monastery was made a conventual priory of the English Benedictine Congregation. In 1961 Pope John XXIII elevated the Priory to the rank of Abbey, and the name of the Priory School was changed to St. Anselm's Abbey School. Former prior Fr. Alban Boultwood, OSB, was named the first abbot and served in that capacity from 1961 to 1975; Abbot Alban died in his sleep on Wednesday, March 25, 2009.[2] 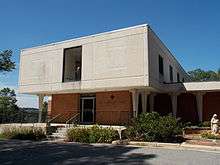 Presently, the Abbey is led by Abbot James Wiseman, OSB, who was elected the community's fifth abbot on June 16, 2011. Wiseman replaces the Abbey's previous superior, Prior-Administrator Simon McGurk, OSB, who came to St. Anselm's from Belmont Abbey in England. The Abbey's fourth abbot, Abbot Aidan Shea, OSB, stepped down after 16 years as abbot in June 2006. There are currently 16 monks in residence at the monastery, the majority of whom are involved in teaching, either at the Abbey School or nearby at The Catholic University of America. The main work of the monks continues to be the running of St. Anselm's Abbey School. The Abbey also has a large and active community of oblates.