Helsingør (Danish pronunciation: [hɛlseŋˈøɐ̯ˀ]), classically known in English as Elsinore, is a city in eastern Denmark.

Helsingør had a population of 46,492 on 1 January 2015.[1] It is known for its castle Kronborg, where William Shakespeare's play Hamlet is set. The HH Ferry route connects Helsingør with Helsingborg in Sweden.

The oldest known fortified building of Helsingør is Flynderborg, an early medieval fortress situated on a hill just south of the medieval city. Around 1200, the first church, Saint Olaf's Church, was built.[2] A number of convents once surrounded the church, but now all that remains is the church building, today the cathedral of the Diocese of Helsingør. The oldest parts of the cathedral of Helsingør date back to the 13th century and tell us that the fishermen's village, as Helsingør was then, had grown to a town of importance.

The name Helsingør is derived from the word hals meaning "neck" or "narrow strait", referring to the narrowest point of the Øresund (Øre Sound) between what is now Helsingør and Helsingborg, Sweden. The people were mentioned as Helsinger (which may mean "the people of the strait") for the first time in King Valdemar the Victorious's Liber Census Daniæ from 1231 (not to be confused with the Helsings of Hälsingland in Sweden).[3] Placenames show that the Helsinger may have had their main fort at Helsingborg and a fortified landing place at Helsingør, to control the ferry route across the strait.

Helsingør as it is known today was founded in the 1420s by the Danish king Eric of Pomerania. He established the Sound Dues in 1429, meaning all foreign ships passing through the strait had to pay a toll, which constituted up to two-thirds of Denmark's state income. With this income Eric of Pomerania built the castle Krogen. The castle was expanded in the 1580s and renamed Kronborg. All ships had to stop in Helsingør to get their cargo taxed and pay a toll to the Danish Crown, but it also generated a significant trade for the town. In 1672 Helsingør had grown into the third biggest town in Denmark.[4] Johan Isaksson Pontanus (Rerum Danicarum Historica, 1631) attributes a long and partially fictitious history to Helsingør.

The Sound Dues were abolished in 1857 with the Copenhagen Convention, where all naval nations agreed to pay a one-time fee.

The car ferry line between Helsingør and Helsingborg, Scania, Sweden is the busiest in the world with more than 70 departures in each direction every day.[5] The route is known as the HH Ferry route and has been sailed by several shipping lines through history. The car ferry terminal is connected to the town's main railway station. From the station, trains depart to Copenhagen every 20 minutes. Trains also depart to Hillerød and Gilleleje. There are another 6 stations or train stops within the city and connected suburbs. Apart from Helsingør Station and Ferry Terminal also Snekkersten station, Espergærde station, Mordrup station and the train stops at the line to Gilleleje, Grønnehave, Marienlyst and Højstrup [6][7] The E47 Motorway towards Copenhagen begins just outside the city limits. The town and surrounding areas also has a network of local and regional buses.[7][8]

For a century, a notable site was the Helsingør Værft or Elsinore shipyard, which covered the whole area between the town and Kronborg Castle. It was founded in 1882. At its height in 1957, it had 3,600 employees. The last ship left the shipyard in 1983 and it closed the same year following heavy losses.

The Wiibroe brewery, founded in 1840, was the second brewery in Denmark to ship bottled beer, just three years after Carlsberg. The last beer was brewed at Wiibroe in Helsingør in 1998. Carlsberg continues to brew beer under the Wiibroe Årgangsøl[9] label. 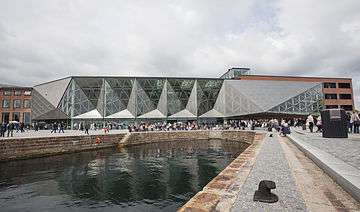 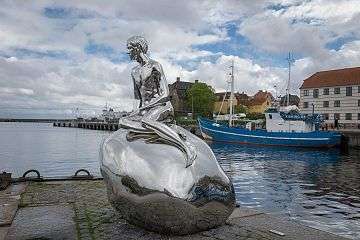 "Han" by Elmgreen and Dragset

After the end of the industrial era, the town of Helsingør had to redefine itself, and came up with an ambitious project: Kulturhavn Kronborg, literally "Culture-harbour of Kronborg". It officially opened on 26 May 2013, intended to appeal to tourists with an interest in culture. The main attraction of Kulturhavn Kronborg is Kronborg Castle, a UNESCO World Heritage Site. Besides the historical attractions of the site, William Shakespeare's play Hamlet is performed annually in its courtyard since 1937. There is a longstanding tradition of performing the play in English, and notable actors in the title role have included Laurence Olivier, John Gielgud, Christopher Plummer, Derek Jacobi, and in 2009 Jude Law. At the heart of Kulturhavn Kronborg lies kulturværftet or The Culture Yard, a new cultural centre and a public library located in the old dockyard. It opened in 2010. The former dry dock now houses the Danish Maritime Museum.

In the centre of the harbour basin stands the polished steel sculpture "Han" ("He") by artist duo Elmgreen and Dragset, commissioned by the City of Helsingør in 2012. It was inaugurated by then Minister of culture, Uffe Elbæk, in June 2012. It is seen as the counterpart (and even little brother) to Edvard Eriksen's world-famous The Little Mermaid statue in Copenhagen, and has caused both praise and protests among locals.

Jørn Utzon lived in Helsingør in his youth because his father was an engineer at Helsingør Værft. Utzon designed The Kingo Houses (1956–60) and The Hammershøj Care Centre (1962) in the city. The project was completed by Birger Schmidt (1966) after Utzon moved to Sydney to work on the Sydney Opera House. 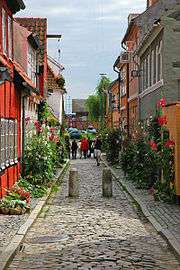 An alley in Helsingør

Helsingør is twinned with:

In fiction and popular culture