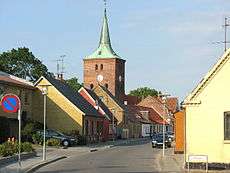 The town centre of Rødby.

Rødby is a town and a former municipality (Danish, kommune) on the island of Lolland in Denmark. The former Rødby municipality covered an area of 120 km², and had a total population of 6,590 (2005). Its last mayor was Hans Ole Sørensen, a member of the Venstre (Liberal Party) political party.

Rødbyhavn ("Rødby Harbour") is located approximately 5 km southwest of the town of Rødby.