This page is for the historical Scottish regiment. For the Canadian regiment of the same name see The Seaforth Highlanders of Canada.

The Seaforth Highlanders (Ross–shire Buffs, The Duke of Albany's) was a historic line infantry regiment of the British Army, mainly associated with large areas of the northern Highlands of Scotland. The regiment existed from 1881 to 1961, and saw service in World War I and World War II, along with many numerous smaller conflicts. In 1961 the regiment was amalgamated with the Queen's Own Cameron Highlanders to form the Queen's Own Highlanders (Seaforth and Camerons), which merged, in 1994, with the Gordon Highlanders to form the Highlanders (Seaforth, Gordons and Camerons). This, however, later joined the Royal Scots Borderers, the Black Watch, the Royal Highland Fusiliers (Princess Margaret's Own Glasgow and Ayrshire Regiment) and the Argyll and Sutherland Highlanders to create the present Royal Regiment of Scotland.

The regiment was created through the amalgamation of the 72nd (Duke of Albany's Own Highlanders) Regiment of Foot and the 78th (Highlanders) (Ross-shire Buffs) Regiment of Foot, as part of the Childers Reforms of the British Army in 1881.[1] It was named after Kenneth Mackenzie, 1st Earl of Seaforth, who had originally raised the 72nd Regiment.[2] Originally named Seaforth Highlanders (Ross-shire Buffs) Queen Victoria approved on 22 November 1881 to style the regiment forthwith Seaforth Highlanders (Ross–shire Buffs, The Duke of Albany's).[3] The 1st battalion saw action at the Battle of Tel el-Kebir in September 1882 during the Anglo-Egyptian War[4] and again at the Battle of Atbara in April 1898 during the Mahdist War.[5]

Meanwhile, the 2nd battalion was deployed on the Chitral Expedition in Spring 1895.[6] The 2nd Battalion suffered heavy losses at the Battle of Magersfontein in December 1899 and also at the Battle of Paardeberg in February 1900 during the Second Boer War.[7]

A 3rd, Militia battalion (formerly the Highland Rifle Militia), was embodied in late 1899, and embarked in February 1900 for service in Egypt together with the 1st battalion.[8] 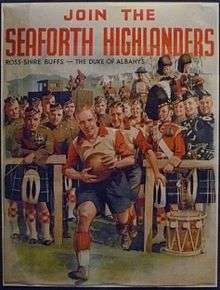 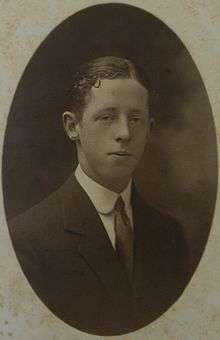 The 1st Battalion, which had been serving in India, landed at Marseilles as part of the Dehra Dun Brigade in the Meerut Division in October 1914 for service on the Western Front.[11] It saw action at the Battle of Aubers Ridge in May 1915.[12] The battalion then moved to Mesopotamia in December 1915, where it took part in the Siege of Kut later that month and the Fall of Baghdad in March 1917 before moving to Palestine in January 1918.[11]

The 1st Garrison Battalion landed in Salonika as part of the 228th Brigade in the 28th Division in August 1916 for service on the Salonika Front.[11] 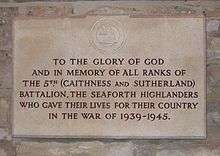 The 1st Battalion, which was in China when war broke out, was deployed to Malaya in November 1940, for service in the Burma Campaign.[15] It joined the 1st Indian Brigade in the 23rd Indian Division in May 1942.[15] 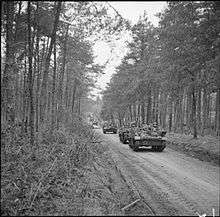 The 2nd Battalion went to France as part of the 152nd Brigade in the 51st Highland Division with the British Expeditionary Force (BEF) in October 1939 but was captured at Saint-Valery-en-Caux during the Battle of France in June 1940.[15] The 2nd Battalion was reconstituted, as part of a reconstituted 152nd Brigade in a reconstituted 51st (Highland) Division, and served in the Middle East, fighting in the Second Battle of El Alamein, and the subsequent Tunisia Campaign, in the Allied invasion of Sicily.[15] In late 1943 the 51st Division returned to the United Kingdom and then took part in Operation Overlord, the Allied invasion of Normandy, taking part in Operation Totalize and Operation Astonia, the capture of the French port of Le Havre.[15] The battalion later participated in Operation Veritable, Operation Plunder and the Western Allied invasion of Germany.[16]

The 4th Battalion also went to France as part of the 152nd Brigade in the 51st Highland Division with the BEF in January 1940 and was also captured at Saint-Valery-en-Caux in June 1940.[17]

(Those borne on the Colours are in bold type) 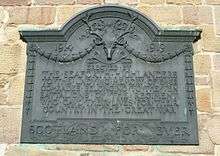 Seaforth Highlanders Great War Memorial plaque in Tain. There is an identical plaque above the entrance to the Courthouse in Dornoch

The following servicemen from the Seaforth Highlanders were awarded the Victoria Cross: