The Buffs (Royal East Kent Regiment), formerly the 3rd Regiment of Foot, was a line infantry regiment of the British Army traditionally raised in the English county of Kent and garrisoned at Canterbury. It had a history dating back to 1572 and was one of the oldest regiments in the British Army, being third in order of precedence (ranked as the 3rd Regiment of the line). The regiment provided distinguished service over a period of almost four hundred years accumulating one hundred and sixteen battle honours. In 1881 under the Childers Reforms it was known as the Buffs (East Kent Regiment) and later, on 3 June 1935, was renamed the Buffs (Royal East Kent Regiment).

The origins of the regiment lay in Thomas Morgan's Company of Foot, The London Trained Bands which was in existence from 1572 to 1648.[1] They fought in the Low Countries during the Dutch Revolt and the Anglo Spanish war taking part in many sieges and battles in that time.[2]

In 1665 when the Second Anglo-Dutch War started the British and Scotch Brigades of the Dutch army were ordered to swear loyalty to the Stadtholder. Those who disobeyed were cashiered. Using his own funds, Sir George Downing, the English ambassador to the Netherlands, raised the Holland Regiment from the starving remnants of those who refused to sign.[3]

In between the campaigns of the Napoleonic Wars and India, "The Buffs" had a tour of service from 1821 until 1827 in the British colony of New South Wales. For the duration of their service, The Buffs were divided into four detachments. The first was based in Sydney from 1821. The second arrived in Hobart in 1822. The third, entitled "The Buffs' Headquarters", arrived in Sydney in 1823. The fourth arrived in Sydney in 1824, but variously saw service throughout the colonies, being stationed at Port Dalrymple, Parramatta, Liverpool, Newcastle, Port Macquarie and Bathurst. The regiment reunited and was transferred to Calcutta in 1827. During their service in New South Wales, The Buffs were commanded by Lieut. Colonel W. Stewart and Lieut Colonel C. Cameron.[4]

In 1858, the 2nd Battalion was stationed in Malta. Lieutenant John Cotter, Adjutant of the 2nd Buffs,[5] would shout "Steady, The Buffs!", a shout which has entered common parlance.[3] 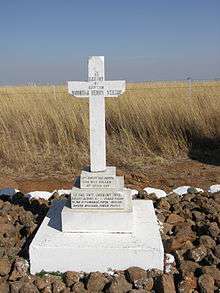 For service in the First World War, ten additional battalions were raised.[10]

After the end of the First World War a small number of men from several battalions saw action during the Third Anglo-Afghan War in 1919.[6]

The 1st Battalion served in many different brigades and divisions, mainly with British Indian Army units, and fought in many different battles and campaigns such as the North African Campaign, the Italian Campaign and the Battle of Anzio when they were a part of 18th Infantry Brigade, assigned to the 1st Infantry Division where they were involved in some of the fiercest fighting of the war. The 18th Brigade returned to the 1st Armoured Division in August 1944 but on 1 January 1945 the division was disbanded and 18th Brigade was broken up and used as replacements for other units. The 1st Buffs spent the rest of the war with the 24th Guards Brigade attached to the 56th (London) Infantry Division. With the 56th Division the battalion fought in Operation Grapeshot, the final offensive in Italy which effectively ended the campaign in Italy.[13]

The 2nd Battalion was sent to France in 1940 with the 132nd Infantry Brigade attached to 44th (Home Counties) Infantry Division to join the British Expeditionary Force and fought in the short but fierce Battle of Dunkirk and were evacuated at Dunkirk back to Britain. The 44th Division were sent to fight in the North African Campaign where it was broken up due to an apparently poor performance in the Battle of Alam el Halfa despite the division having only the 132nd Brigade under command as other brigades were attached to other divisions. The 132nd Brigade disbanded and 2nd Buffs then was transferred to the Far East with the 26th Indian Infantry Brigade and remained there for the war. In 1944 the brigade was redesignated the 26th British Infantry Brigade which itself became part of the 36th British Infantry Division and served with the British Fourteenth Army in the Burma Campaign.[14]

The 4th Battalion Buffs was a 1st Line Territorial Army unit serving with the BEF in France 1940. The battalion was transferred to the island of Malta in 1941 and served throughout the siege. The battalion then joined the 234th Infantry Brigade. The brigade took part in the disastrous Battle of Leros in an attempt to capture the Dodecanese Islands in late 1943. The brigade and other Allied forces, mainly Italian, attempted to hold the island from the Germans but without success. This was due mainly to German air superiority as the Allies had very few planes to cover them. The 234th Brigade Commander, Robert Tilney, ordered the surrender after many days of resistance and hard fighting.[15]

The 5th Battalion was reformed in 1939 as a 2nd Line duplicate of the 4th Battalion raised when the Territorial Army was doubled in size. The battalion also saw service in France 1940 with the 12th (Eastern) Infantry Division, which itself was a 2nd Line duplicate of the 44th (Home Counties) Division. The 5th Buffs were serving 6th and 7th Royal West Kents in the 36th Infantry Brigade. Like the 2nd and 4th Battalions they served with the BEF in France in 1940 and fought in the Battle of France and were evacuated at Dunkirk. The 12th Division suffered heavy casualties due mainly to most of the men having little training and the division having no artillery or support units. After returning to England the division was disbanded in July 1940, due to the casualties it sustained. In 1942 the 36th Brigade was assigned to the newly raised 78th Division and took part in Operation Torch, the Allied landings in North Africa, followed by the campaign in Tunisia where the 78th Division, as part of the British First Army, distinguished itself during the crucial capture of Longstop Hill.[16] The division then fought in the Sicilian Campaign, as part of the British Eighth Army. The 5th Buffs and the rest of 78th Division then took part in the fighting in Italy and served there for the rest of the war until the 1945 Offensive.[17]

The Buffs also raised many more battalions during the war, mainly for home defence or as training units. None, save the 7th Battalion, saw active service overseas. The 7th Battalion was raised in 1940 and was converted to the 141st Regiment Royal Armoured Corps in 1941 due to the shortage of armoured troops in the British Army.[18] 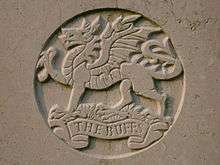 Badge of the Buffs as shown on a Post-War grave at Stanley Military Cemetery, Hong Kong

The Colonels-in-Chief were as follows:[3]

The Colonels were as follows:[3] 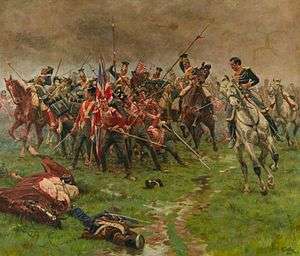 Buffs at the Battle of Albuhera by William Barnes Wollen

Freedom of the City of London

The regiment was awarded the Freedom of the City of London, giving them the right to march through the City.[3]

The honours in bold were worn on the Colours.[26]

The following members of the Regiment were awarded the Victoria Cross: 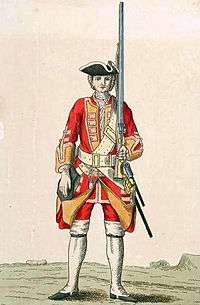 In 1667 the Holland Regiment is recorded as wearing "red jackets lined with yellow". Subsequently, Nathan Brook's Army List of 1684 referred to "Coated red, lined with a flesh colour". This marked the beginning of the historic association of the Regiment with buff facings (a dull-yellow colour). A notice in the London Gazette of 21 January 1685 describing the clothing of three deserters from what was still the Holland Regiment, referred for the first time to the colour buff:"a new Red Coat lin'd with a Buff colour'd lining, surtout Sleeves, cross Pockets with three scallops, large plain pewter Buttons, Breeches of ths same colour as the Coat lining".[27]

An illustration of the Colonel's colour in 1707 shows a dragon on a buff background, following the award of this distinctive symbol to the regiment as "a reward for its gallant conduct on all occasions"; according to the Army historian Richard Cannon in a book published in 1839. The dragon was believed to have been adopted as it was one of the supporters of the royal arms of Elizabeth I, who issued the warrant for the raising of the regiment in 1572.[28] Through the remainder of the 18th century both the dragon and the buff facings (worn on cuffs, lapels and coat linings) remained as particular distinctions of the regiment. A Royal Warrant of 1751 standardising all colours (flags), badges and uniforms listed the "3rd Regiment, or The Buffs".[28] The Buffs were at this time the only infantry regiment to owe their official title to their facing colours. The green dragon was recorded in the same document as the "ancient badge" of the Buffs – displayed as a woven or painted device on the mitre cap of the Regiment's grenadiers, the colours and the drums.[28]

In 1881 the reorganisation of most infantry regiments on a territorial basis under the Childers Reforms led to the newly renamed "The Buffs (East Kent Regiment)" losing its buff facings in favour of the white collars and cuffs intended to distinguish all non-Royal English and Welsh regiments.[29] The dragon survived as part of the (now metal) headdress badge, although replaced on collars by the white horse of Kent.[30] The horse had formed the insignia of the East Kent Militia with formed the 3rd battalion of the new regiment. Both changes were unpopular within the Regiment and in 1887 the Buffs were authorised to convert the white facings on their scarlet tunics to buff – at the Regiment's expense and using a pipeclay mixture developed by an officer of the 2nd Battalion.[31] In 1890 buff was officially restored as the regimental colour on flags, tunics and mess jackets.[32] On 23 May 1894 approval was given for the dragon to be resumed as the collar badge.[33]