The Maharajah of Kolhapur in 1894 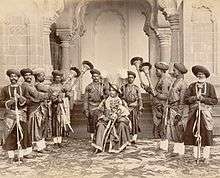 Shahu was born on 26 June 1874 as Yeshwantrao Ghatge, eldest son of Jaishinghrao Ghatge, chief of Kagal (senior) by his wife Radhabai, a daughter of the Raja of Mudhol. He was adopted by Anandibai, widow of Raja Shivaji VI, in March 1884. Several generations of inter-marriage had ensured that Shahu's family was connected intimately with the ruling dynasty of Kolhapur, which is apparently what rendered him a suitable candidate for adoption, despite his not being a male-line member of the Bhosale dynasty. He was educated at Rajkumar College, Rajkot. A council of regency was appointed by the British government of India to oversee affairs of state during Shahu's minority and during that time he was tutored in administrative affairs by Sir Stuart Fraser. Shahu was invested with ruling powers upon coming of age in 1894.[4]

When the Brahmin priests of the royal family refused to perform the rites of the non-Brahmins in accordance with the Vedic hymns, he took the daring step of removing the priests and appointment a young Maratha as the religious teacher of the non-Brahmins, with the title of `Kshatra Jagadguru' (the world teacher of the Kshatriyas). This was known as the `Vedokta' controversy. It brought a hornet's nest about his ears but he was not the man to retrace his steps in the face of opposition. He soon became the leader of the non-Brahmin movement and united the Marathas under his banner.[5][6] 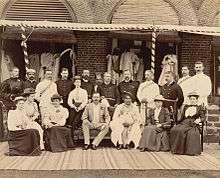 Group at Residency including the Maharaja of Kolhapur

Shahu Maharaj is credited with doing much to further the lot of the lower castes, and indeed this assessment is warranted. He did much to make education and employment available to all: he not only subsidized education in his state, eventually providing free education to all, but also opened several hostels in Kolhapur thereby facilitating the education of the rural and low-caste indigent. His educational institutions include Victoria Maratha Boarding School, Miss Clarke Boarding School and Deccan Rayat Sanstha. He also ensured suitable employment for students thus educated, thereby creating one of the earliest Affirmative action (50% reservation to weaker sections) programs in history. Many of these measures were effected in the year 1902 on 26 July.[7] He started Shahu Chhatrapati Weaving and Spinning Mill in 1906 to provide employment. Rajaram college was built by Shahu Maharaja and afterwards it was named after him.[8]

In 1903 he attended the Coronation of King Edward VII and Queen Alexandra, and in May that year he received the honorary degree LL.D. from the University of Cambridge.[9] 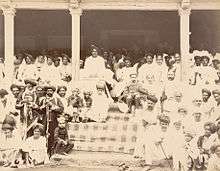 In 1891, Shahu married Lakshmibai née Khanvilkar (1880–1945), daughter of a Maratha nobleman from Baroda. They were the parents of four children:

Chhatrapati Shahu of Kolhapur died on May 6, 1922. He was survived by his wife, his elder son Rajaram and his daughter Radhabai.[10]

During his life he acquired the following titles and honorific names: