Narayana Guru, also known as Sree Narayana Guru (c. 1856 – 20 September 1928) was a social reformer of India. He was born into a Kerala family in an era when people from such communities, which were regarded as Avarna, faced much social injustice in the caste-ridden of Kerala. He led a reform movement in Kerala, rejected casteism, and promoted new values of spiritual freedom and social equality.[1] He stressed the need for the spiritual and social uplift of the downtrodden by their own efforts through the establishment of temples and educational institutions. In the process, he denounced the superstitions that clouded the fundamental Hindu cultural convention of caste. 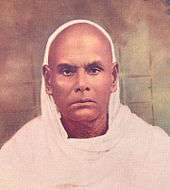 There are many legends surrounding the life of Narayana Guru but a few certain facts until his rise to prominence in 1887. He was born probably in 1856, the son of an Ezhava peasant, Madan and his wife Kuttiyamma, in the village of Chempazhanthy near Thiruvananthapuram. To tide over the sheer poverty of his family, Little Nanu, as he was affectionately known, worked as a cowherd for a wealthy neighbour. Once, Kummanpallil Raman Pillai Asan of Mavelikara spotted the young Nanu with his neighbour's cow. Asan's sympathy turned Nanu's entire future. He made arrangements for Nanu to join the school run by Moottha Pillai Asan, a Nair teacher of Kazhakoottam. He was educated in part by Moottha Pillai Asan and later for 6 years by Raman Pilla Asan (Asan is the Tamil/Malayalam version of the Sanskrit word 'Acharyan' which means an erudite teacher) himself with free food and accomodation at his own residence. Raman Pillai Asan was the Headmaster of a Sanskrit school at Kayamkulam as well as a visiting faculty of the Sanskrit schools at Kazhakoottam and Pettah in Thiruvananthapuram. Little Nanu was deeply influenced by Vedanta and by the ideas of social equality and religious reforms as kindled by Raman Pillai Asan. Nanu taught religion and Sanskrit to local children and studied yoga with notable ascetics such as Chattampi Swami, who too was a disciple of Raman Pillai Asan. He was an itinerant yogi for some time and Cyriac Pullapilly says that he was probably married for a few years but "his worshipful biographers ignored this part of his life out of reverence for his later ascetism".[2][3]

In the course of his wanderings in search of enlightenment, Narayana visited Aruvippuram, where he and his followers erected a temple to Shiva in 1888, defying the tradition that this was done by Brahmins alone. As a youth, Narayana Guru turned away from the temple rituals of his local village and travelled widely, living an ascetic lifestyle and seeking religious understanding. He eventually became a schoolteacher and then a religious reformer.[4] 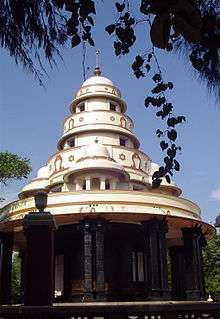 Around 1897, he composed Atmopadesa Satakam (one hundred verses of self-instruction) in Malayalam, widely regarded as a literary and philosophical masterpiece. In 1904, he settled at Sivagiri to pursue his Sadhana (spiritual practice), choosing Amba as his deity. He also opened a Sanskrit school in Varkala, where poor boys and orphans were taken under his care and given education regardless of caste distinctions. Temples were built at various places–Thrissur, Kannur, Anchuthengu, Tellicherry, Calicut, Mangalore-under his supervision. A temple was built for Sharada Devi in 1912 at Sivagiri. In 1913, Narayana Guru founded the Advaita Ashram at Aluva, dedicating it to the principle of Om Sahodaryam Sarvatra (universal brotherhood). Aluva also became the venue for a Conference of Universal Brotherhood in 1921, and a Conference of All Religions in 1924, both conducted under his guidance. He also stressed the need for a Brahma Vidyalaya for a comparative study of different religious faiths.

The trio of Vallabhasseri Govindan Vaidyar, T K Kittan Writer, and Mooloor S. Padmanabha Panicker are believed to have conceived the idea of the Sivagiri pilgrimage. Though the proposal was approved by Narayana Guru as early as 1928, it was not until 1932 that the first pilgrimage was undertaken from Elavumthitta in Pathanamthitta District.[5]

Narayana Guru stated the goals of the pilgrimage to be the promotion of education, cleanliness, devotion to God, organization, agriculture, trade, handicrafts, and technical training. He advised Vaidyar and Writer to organise a series of lectures on these themes and stressed the need for the practice of these ideals, stating this to be the core purpose of Sivagiri pilgrimage.

The Palluruthy event in 1927 was the last anniversary of the S.N.D.P. Yogam which Narayana Guru attended. This was also his last public function. He became seriously ill in September 1928 and remained bedridden for some time. He died on 20 September 1928.

Commemorative coins issued by the Reserve Bank of India in 2006 on the occasion of the 150th birth anniversary of Narayana Guru.

Rabindranath Tagore met Narayana Guru at the latter's ashram in Sivagiri in November 1922. Tagore later said of Narayana Guru that, "I have never come across one who is spiritually greater than Swami Narayana Guru or a person who is at par with him in spiritual attainment".[6]

On 21 August 1967, Narayana Guru was commemorated on an Indian postage stamp of denomination 15 nP.[7] Another commemorative stamp on him was issued by Sri Lanka Post on 4 September 2009.[8]

Other films depicting him include: