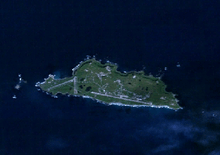 The Russian vessel Saint Peter and Paul wrecked at Shemya in 1762. Most of the crew survived.

A United States Air Force radar, surveillance, and weather station and aircraft refueling station, including a 10,000 ft (3 km) long runway, opened on Shemya in 1943 and is still in operation. The station, originally Shemya Air Force Base or Shemya Station, had 1,500 workers at its peak in the 1960s. Observations from Shemya were normally the first radar reports of new Russian satellite launches from Tyuratam (Baikonur) in the early days of satellite tracking; see Project Space Track.

In 1956, Northwest Airlines leased Shemya Island from the U.S. government to use as a refueling station on their North Pacific route. According to Northwest's website, that made them "the first airline to operate its own airport."[2]

The station was renamed the Eareckson Air Station in 1993 to honor USAF Colonel William O. Eareckson, who had commanded bomber operations during the Aleutian Campaign of World War II. 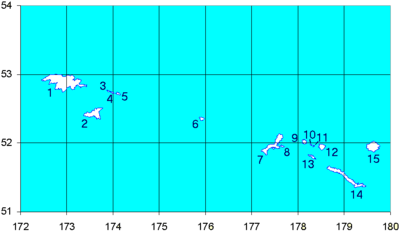 The station still operates as a radar station and aircraft refueling station with a staff of about 180 people. The 2000 census reported an official resident population of 27 persons on the island.

One of the most recognizable features of the island is the COBRA DANE radar system. This radar was built in 1976 and brought on-line in 1977 for the primary mission of intelligence gathering in support of verification of the Strategic Arms Limitation Talks (SALT) II agreement.

Shemya was an important outpost during the Cold War. As part of Project Bluegrass, the White Alice Communications System provided a vital tropospheric scatter communications link to the mainland during the early-1960s to late-1970s. Its two 120 ft parabolic reflectors and 50 kW transmitter output bridged the nearly 400 mile gap to Adak, Alaska.

The weather on Shemya is very drastic, though the temperatures only vary between single digits to the mid fifties, and the climate is perhaps the most equatorward low-altitude occurrence of a polar climate (ET) in the world, though it is extremely close to a subpolar oceanic climate (Cfc). The island weather is most likely to be cloudy with a mist and the wind is often in the mid 30s to 40 mph. The Japanese current in the Pacific to the south of the island regulates the temperature.