Amchitka (/æmˈtʃɪtkə/; Aleut: Amchixtax̂[1]) is a volcanic, tectonically unstable island in the Rat Islands group of the Aleutian Islands in southwest Alaska. It is part of the Alaska Maritime National Wildlife Refuge. The island is about 68 kilometers (42 mi) long, and from 3 to 6 km (1.9 to 3.7 mi) wide.[2] The area has a maritime climate, with many storms, and mostly overcast skies.

Amchitka was populated for more than 2,500 years by the Aleut people, but has had no permanent population since 1832. The island has been part of the United States since the Alaska Purchase of 1867. During World War II, it was used as an airfield by US forces in the Aleutian Islands Campaign.

Amchitka was selected by the United States Atomic Energy Commission to be the site for underground detonations of nuclear weapons. Three such tests were carried out: Long Shot, an 80-kiloton (330 TJ) blast in 1965; Milrow, a 1-megaton (4.2 PJ) blast in 1969; and Cannikin in 1971 – at 5 Mt (21 PJ), the largest underground test ever conducted by the United States. The tests were highly controversial, with environmental groups fearing that the Cannikin explosion, in particular, would cause severe earthquakes and tsunamis. Amchitka is no longer used for nuclear testing. It is still monitored for the leakage of radioactive materials.

The eastern part of the island is a lowland plateau, with isolated ponds[4] and gently rolling hills.[3] There is low but abundant vegetation,[3] consisting of mosses, lichens, liverworts, ferns, grasses, sedges, and crowberry.[4] The center of the island is mountainous, and the western end is barren and vegetation is sparse.[3]

Amchitka has a maritime climate, often foggy and windswept, with cloud cover 98 percent of the time.[3] While temperatures are moderated by the ocean, storms are frequent.[5] Geologically, the island is volcanic, being a part of a small crustal block on the Aleutian Arc that is being torn apart by oblique subduction. It is "one of the least stable tectonic environments in the United States."[6] 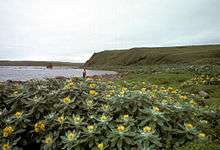 In 1783, Daikokuya Kōdayū and 15 Japanese castaways landed on Amchitka after drifting for seven months. The castaways were taken care of by Russian employees of Zhigarev and hunted with indigenous people. Six of the castaways died in three years.[10]

World War II and after

In June 1942, the Japanese occupied some of the western Aleutian islands, and hoped to occupy Amchitka.[11] Eager to remove the Japanese, the Joint Chiefs of Staff agreed to move quickly to regain the territory. American planners decided to build a series of airfields to the west of Umnak, from which bombers could attack the invading forces.[12]

The U.S. Army established bases at Adak and 13 other locations.[12] At the War Department's suggestion, an initial reconnaissance of Amchitka was carried out in September 1942, which found that it would be difficult to build an airstrip on the island.[11] Nevertheless, planners decided on December 13 that the airfield "had to be built" to prevent the Japanese from doing the same.[11] A further reconnaissance mission visited Amchitka from 17 to 19 December, and reported that a fighter strip could be built in two to three weeks, and a main airfield in three to four months.[11] The plan was approved and began in 1942.[11]

American forces made an unopposed landing on Amchitka on January 12, 1943. Despite facing difficult weather conditions and bombing from the Japanese, the airfield was usable by February 16.[11] The Alaska Command was now 80 km (50 mi) away from their target, Kiska.[12] The military eventually built numerous buildings, roads, and a total of three airstrips on the island,[13] one of which would later be rebuilt and used by the Atomic Energy Commission in the late 1960s.[14] At its peak, the occupancy of Amchitka reached 15,000 troops.[13]

The Aleutian Islands campaign was successfully completed on August 24, 1943.[12] In that month, a strategic intercept station was established on the island, which remained until February 1945.[15] On 31 December 1949 the Air Force Base was closed due to insufficient personnel and staff.[16] The Army closed its communications facility at Amchitka in August 1950.[17] On 31 December 1950 the Air Force 2107th Air Weather Group pulled the last of its personnel out of Amchitka and the facility was abandoned.[18]

The site later hosted an Air Force White Alice telecommunication system in 1959 to 1961, and a temporary relay station in the 1960s and 1970s.[13] A prototype Relocatable Over-the-Horizon Radar system existed on Amchitka between 1991 and 1993 to conduct surveillance on Russia.[19] 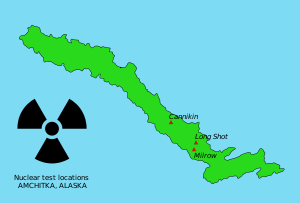 The locations of the nuclear tests

With the pullout of military forces from Amchitka in 1950, the Department of Defense initially considered the island for nuclear testing planned for 1951. Requiring information about the cratering potential of nuclear weapons, plans were made to detonate two 20-kiloton (84 TJ) devices.[5] After approximately 34 test holes had been drilled, the site was deemed unsuitable,[17] and the project was moved to the Nevada test site.[5]

In the late 1950s, scientists realized that improved seismological knowledge was necessary for the detection of Soviet underground nuclear explosions.[20] The 1.7-kiloton (7.1 TJ) "Rainier" test (part of Operation Plumbbob, performed in Nevada) produced strong seismic signals, but looked much like an ordinary earthquake. In 1959, Dr. James R. Killian, the Special Assistant to the President for Science and Technology, formed the Panel on Seismic Improvement (which subsequently recommended the program that came to be known as Vela Uniform), with the twin goals of improving seismic instruments and deploying them globally, and researching in more depth the seismic effects of nuclear explosions.[21] The project was subsequently initiated by the Eisenhower administration.[20]

Together with the Atomic Energy Commission, the DoD began assessing Amchitka for use as part of the Vela Uniform tests.[5] 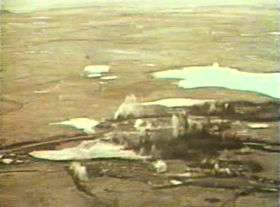 This film still shows dirt being displaced from the Long Shot underground test.

Although it would not be publicly announced until March 18, 1965, senior Alaskan officials were notified the previous February.[23] After the devastating Great Alaska earthquake of March 27, 1964, the governor expressed concern about the psychological effects of the test on the populace. He was quickly reassured.[23]

Long Shot was detonated on October 29, 1965, and the yield was 80 kilotons (330 TJ). It was the first underground test in a remote area, and the first test managed by the DoD.[5] While there was no surface collapse,[3] tritium and krypton were found at the surface following the test;[3][24] this was not made public until 1969.[24]

The shockwave reached the surface with an acceleration of over 35 g (340 m/s2), causing a dome of the Earth's surface, approximately 3 km (2 mi) in radius, to rise about 5 meters (16 ft).[27] The blast "turned the surrounding sea to froth" and "forced geysers of mud and water from local streams and lakes 50 feet (15 m) into the air".[24] A "surface collapse feature", also known as a subsidence crater, was formed by material collapsing into the cavity formed by the explosion.[3]

Cannikin was intended to test the design of the Spartan anti-ballistic missile (ABM) interceptor – a high-yield warhead that "produced copious amounts of x-rays and minimized fission output and debris to prevent blackout of ABM radar systems."[28] The test would "measure the yield of the device, measure the x-ray flux and spectrum, and assure deployment of a reliable design."[29]

A few days after the Milrow test, the Don't Make A Wave Committee was organized at a meeting in Vancouver, British Columbia, Canada. The Committee's name referred to predictions made by a Vancouver journalist named Bob Hunter, later to become Greenpeace member 000. He wrote that the test would cause earthquakes and a tsunami.[30] On the agenda was whether to fight another blast at the island, or whether to expand their efforts to fight all perceived threats against the environment. As he was leaving, one man gave the traditional farewell of the peace-activist movement, "Peace." "Make it a green peace," replied another member. The Committee would later become Greenpeace.[31]

The AEC considered the likelihood of the test triggering a severe earthquake "very unlikely", unless one was already imminent on a nearby fault, and considered a tsunami "even more unlikely".[14] Others disagreed. Russell Train, then Chairman of the Council on Environmental Quality, argued that "experience with Milrow ... does not provide a sure basis for extrapolation. In the highly nonlinear phenomena involved in earthquake generation, there may be a threshold value of the strain that must be exceeded prior to initiation of a large earthquake. ... The underground explosion could serve as the first domino of the row of dominoes leading to a major earthquake. ... as in the case of earthquakes it is not possible at this time to assess quantitatively the probability of a tsunami following the explosion."[32] 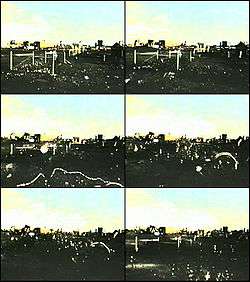 Film stills from the Cannikin test show the effects on the surface of the 5-megaton (21 PJ) detonation below, equivalent to a 7.0 earthquake.

In July 1971, a group called the Committee for Nuclear Responsibility filed suit against the AEC, asking the court to stop the test.[33] The suit was unsuccessful, with the Supreme Court denying the injunction by 4 votes to 3,[34] and Richard Nixon personally authorized the $200 million test, in spite of objections from Japan, Peru, and Sweden.[35] "What the Court didn’t know, however, was that six federal agencies, including the departments of State and Interior, and the fledgling EPA, had lodged serious objections to the Cannikin test, ranging from environmental and health concerns to legal and diplomatic problems. Nixon issued an executive order to keep the comments from being released."[36] The Don't Make A Wave Committee chartered a boat, in which they had intended to sail to the island in protest, but due to weather conditions they were unable to reach their destination.[31]

According to wildlife surveys following the Cannikin event by the University of Alaska Fairbanks, 700–2,000 sea otters were killed by overpressures in the Bering Sea as a direct result of the explosion. This survey showed that number of sea otters endangered by the blast was far greater than the Atomic Energy Commission had predicted.

The AEC withdrew from the island in 1973, though scientists continue to visit the island for monitoring purposes.[17] In 2001, the DoE returned to the site to remove environmental contamination. Drilling mud pits were stabilized by mixing with clean soil, covering with a polyester membrane, topped with soil and re-seeded.[13]

Concerns have been expressed that new fissures may be opening underground, allowing radioactive materials to leak into the ocean.[39] A 1996 Greenpeace study found that Cannikin was leaking both plutonium and americium into the environment,.[24] In 2004, scientific divers from the University of Alaska Fairbanks collected shallow subtidal organisms[41] and reported that "There were no indications of any radioactive leakage, and all that was really wonderful news."[29] Similar findings are reported by a 2006 study, which found that levels of plutonium "were very small and not significant biologically".[42]

The Department of Energy continues to monitor the site as part of their remediation program. This is expected to continue until 2025, after which the site is intended to become a restricted access wildlife preserve.[43]