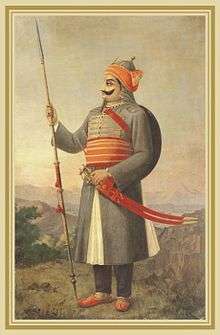 Maharana Pratap, one of the most notable Sisodia rulers

The Sisodia are a Rajput clan from India. They are Chattari Rajputs of the Suryavanshi lineage, and ruled over the kingdom of Mewar in Rajasthan. The name of the clan is also transliterated as Sesodia, Shishodia, Shishodya, Sisodya, Sisodhya or Sisodiya.

Sisodias, like many other Rajput clans, claim origin from the legendary Suryavansha or solar dynasty.[1] Rajprashasti Mahakavyam, a 17th-century laudatory text commissioned by Mewar's ruler Rana Raj Singh, contains a partly mythical, partly legendary and partly historical genealogy of the Sisodias. The work was authored by Ranchhod Bhatt, a Telangana Brahmin whose family received regular gifts from the Sisodias. The genealogy traces the dynasty's origin to the rulers of Ayodhya, starting with Manu, who was succeeded by several emperors from the Ikshvaku dynasty. One ruler Vijaya left Ayodhya for "the south" as per a heavenly command (the exact place of his settlement is not mentioned). He was succeeded by 14 rulers whose names end in the suffix –aditya ("sun"). Grahaditya, the last of these, established a new dynasty called Grahaputra (or Gahlot). His eldest son Vashapa is said to have conquered "Chitrakuta" (Chittor) in 8th century, and adopted the title Raval, thanks to a boon from Shiva.[2]

Grahaditya and Vashapa (better known as Bappa Rawal) are both popular figures in the Rajasthani folklore.[3] Their successors include people who are known to be historical figures. According to the Rajprashasti genealogy, one of these – Samar Singh – married Prithi, the sister of Prithviraj Chauhan. His grandson Rahapa adopted the title Rana (monarch). Rahapa's descendants spent some time at a place called Sisoda, and therefore, came to be known as "Sisodia".[2]

According to Persian court historians, the Sisodias originated from Noshizad, son of Noshirvan, or Maha Banu, the eldest daughter of Yazdegerd III.[4]

According to the Sisodia chronicles, when the Delhi Sultan Alauddin Khilji attacked Chittorgarh in 1303, the Sisodia men performed saka (fighting to death), while their women committed jauhar (self-immolation in preference to becoming enemy captives). This was repeated twice: when Bahadur Shah of Gujarat besieged Chittorgarh in 1535, and when the Mughal emperor Akbar conquered it in 1567.[6]