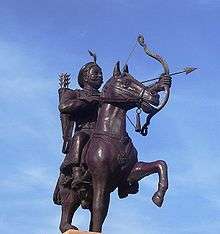 Chauhan, Chouhan , Chohan , Chohhan, is an Indian Rajput caste. In the medieval period, some people associated with it ruled parts of Northern India and one, Prithvi Raj Chauhan, was the king of Delhi.

The word Chauhan is the vernacular form of the Sanskrit term Chahamana. Several Chauhan inscriptions name a legendary hero called Chahamana as their ancestor, but none of them state the period in which he lived.[1]

The earliest extant inscription that describes the origin of the Chauhans is the 1119 CE Sevadi inscription of Ratnapala, a ruler of the Naddula Chahamana dynasty. According to this inscription, the ancestor of the Chahamanas was born from the eye of Indra.[2]

The Ajmer inscription of the Shakambhari Chahamana ruler Vigraharaja IV (c. 1150–64 CE) claims that Chahamana belonged to the solar dynasty, descending from Ikshavaku and Rama. The 12th-century Prithviraja Vijaya mahakavya, composed by Prithviraja III's court poet Jayanaka, also claims a solar dynasty origin for the ruling dynasty. According to this text, Chahamana came to earth from Arkamandal (the orbit of the sun).[5]

The 15th-century Hammira Mahakavya of Nayachandra Suri, which describes the life of the Ranthambore branch ruler Hammira, gives the following account: Once Brahma was wandering in search of an auspicious place to conduct a ritual sacrifice. He ultimately chose the place where a lotus from his hand fell; this place came to be known as Pushkara. Brahma wanted to protect his sacrificial ceremony against interference from danavas (miscreant beings). Therefore, he remembered the Sun, and a hero came into being from the sun's orb. This hero was Chohan, the ancestor of the Hammira's dynasty.[6] The earliest extant recension of Prithviraj Raso of Chand Bardai, dated to 15th or 16th century, states that the first Chauhan king – Manikya Rai – was born from Brahma's sacrifice.[6] The 16th-century Surjana-Charita, composed by the Bengali poet Chandra Shekhara under patronage of the Ranthambore ruler Rao Surjana, contains a similar account. It states that Brahma created the first Chahamana from the Sun's disc during a sacrificial ceremony at Pushkara.[7]

Despite these earlier myths, it was the Agnivanshi (or Agnikula) myth that became most popular among the Chauhans and other Rajput clans. According to this myth, some of the Rajput clans originated from Agni, in a sacrificial fire pit. This legend was probably invented by the 10th-century Paramara court poet Padmagupta, whose Nava-Sahasanka-Charita mentions only the Paramaras as fire-born.[8] The inclusion of Chauhans in the Agnivanshi myth can be traced back to the later recensions of Prithviraj Raso. In this version of the legend, once Vashistha and other great sages begin a major sacrificial ceremony on Mount Abu. The ritual was interrupted by miscreant daityas (demons). To get rid of these demons, Vashistha createed progenitors of three Rajput dynasties from the sacrificial fire pit. These were Parihar (Pratiharas), Chaluk (Chalukya or Solanki), and Parmar (Paramara). These heroes were unable to defeat the demons. So, the sages prayed again, and this time a fourth warrior appeared: Chahuvana (Chauhan). This fourth hero slayed the demons.[9][10]

The earliest available copies of Prithviraj Raso do not mention the Agnivanshi legend.[11] It is possible that the 16th-century bards came up with the legend to foster Rajput unity against the Mughal emperor Akbar.[12] Adaptions of the Prithviraj Raso occur in several later works. The Hammira Raso (1728 CE) by Jodharaja, a court poet of prince Chandrabhana of Neemrana, states that once the Kshatriyas (warriors) became extinct. So, the great sages assembled at Mount Abu and created three heroes. When these three heroes could not defeat the demons, they created Chahuvanaji.[13] A slight variation occurs in the writings of Surya Malla Mishrana, the court poet of Bundi. In this version, the various gods create the four heroes on Vashistha's request.[14] According to the bardic tale of the Khichi clan of Chauhans, the Parwar (Paramara) was born from Shiva's essence; the Solankhi (Solanki) or Chaluk Rao (Chalukya) was born from Brahma's essence; the Pariyar (Parihar) was born from Devi's essence; and the Chahuvan (Chauhan) was born from Agni, the fire.[15]

Denzil Ibbetson, an administrator of the British Raj, classified the Chauhans as a tribe rather than as a caste. He believed, like John Nesfield, that the society of the Northwest Frontier Provinces and Punjab in British India did not permit the rigid imposition of an administratively defined caste construct as his colleague, H. H. Risley preferred. According to Ibbetson, society in Punjab was less governed by Brahmanical ideas of caste, based on varna, and instead was more open and fluid. Tribes, which he considered to be kin-based groups that dominated small areas, were the dominant feature of rural life. Caste designators, such as Jat and Rajput, were status-based titles to which any tribe that rose to social prominence could lay a claim, and which could be dismissed by their peers if they declined. Susan Bayly, a modern anthropologist, considers him to have had "a high degree of accuracy in his observations of Punjab society ... [I]n his writings we really do see the beginnings of modern, regionally based Indian anthropology."[16]

The Chauhans were historically a powerful group in the region now known as Rajasthan. For around 400 years from the 7th century CE their strength in Sambhar was a threat to the power-base of the Guhilots in the south-west of the area, as also was the strength of their fellow Agnivanshi clans.[17] They suffered a set-back in 1192 when their leader, Prithviraj Chauhan, was defeated at the Battle of Tarain but this did not signify their demise.[18] The kingdom broke into the Satyapura and Devda branches after the invasion of Qutbu l-Din Aibak in 1197.[19]

The ruling dynasties belonging to the Chauhan clan included:

The princely states ruled by families claiming Chauhan descent include:[24][25]