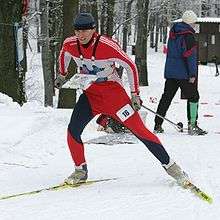 Ski orienteering (SkiO) is a cross-country skiing endurance winter racing sport and one of the four orienteering disciplines recognized by the IOF. A successful ski orienteer combines high physical endurance, strength and excellent technical skiing skills with the ability to navigate and make the best route choices while skiing at a high speed.

Standard orienteering maps are used, but with special green overprinting of trails and tracks to indicate their navigability in snow; other symbols indicate whether any roads are snow-covered or clear. Navigation tactics is similar to mountain bike orienteering. Standard skate-skiing equipment is used, along with a map holder attached to the chest.[1] Compared to cross-country skiing, upper body strength is more important because of double poling needed along narrow snow trails.

Ski orienteering events are designed to test both physical strength and navigation skills of the athletes. Ski orienteers use the map to navigate a dense ski track network in order to visit a number of control points in the shortest possible time. The track network is printed on the map, and there is no marked route in the terrain. The control points must be visited in the right order. The map gives all information the athlete needs in order to decide which route is the fastest, including the quality and width of the tracks. The athlete has to take hundreds of route choice decisions at high speed during every race: a slight lack of concentration for just a hundredth of a second may cost the medal. Ski orienteering is time-measured and objective. The clock is the judge: fastest time wins. The electronic card verifies that the athlete has visited all control points in the right order.[2]

World-wide sport Ski orienteering is practiced on four continents. The events take place in the natural environment, over a variety of outdoor terrains, from city parks to countryside fields, forests and mountain sides - wherever there is snow. The leading ski orienteering regions are Asia, Europe and North America.

A person taking part in competitions in ski orienteering is equipped with: 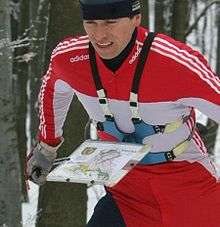