For other uses, see Gaiter (disambiguation).
Not to be confused with Spat (footwear). 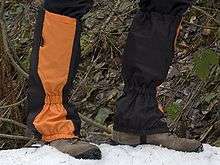 In Army parlance, a gaiter covers leg and bootlacing; a legging covers only the leg. In RAF parlance, gaiter includes legging. The American Army during World War I[1] and World War II had leggings, which were gaiters. Above the knee spatterdashes were cotton or canvas, as were many gaiters of varying lengths thereafter. Leather gaiters were rare in military, though sometimes a calf-length cotton gaiter had leather kneecaps added. Leggings, however, were very often made of leather, but also canvas.

Typical gaiters as used by infantrymen in the 1960s

Gaiters are a type of protective clothing for a person's ankles and legs below the knee. Gaiters are worn when walking, hiking, running (especially orienteering and rogaining) outdoors amongst dense underbrush or in snow, with or without snowshoes. Heavy gaiters are often worn when using crampons, to protect the leg and ankle from the spikes of the opposite foot. Gaiters strap over the hiking boot and around the person's leg to provide protection from branches and thorns and to prevent mud, snow, etc. from entering the top of the boot. Gaiters may also be worn as protection against snake bites.[2]

Gaiters are similar to puttees, a part of numerous military uniforms. Gaiters known as jambieres (derived from the French word jambe for legs, hence leggings) were part of the uniform of Zouave infantry regiments. 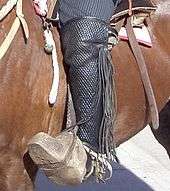 During the 19th century gaiters for riding typically were known as riding gaiters, distinguishing them from the other gaiters that were in general use. Today, half chaps are a type of gaiter worn by equestrians. Most forms fit over the calf. These are intended to protect the rider's leg from wear by the stirrup leathers and other saddle parts. Modern styles usually have a zipper or hook and loop fasteners on the outside of the leg. 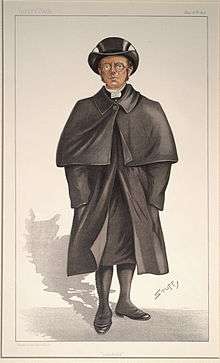 The Bishop of Lichfield, in Vanity Fair, 1897

In the Anglican church

Gaiters formed a part of the everyday clerical clothing of bishops and archdeacons of the Church of England until the middle part of the twentieth century. They were also worn by some cathedral deans. They were made of black cotton, wool, or silk, and buttoned up the sides, reaching to just below the knee where they would join with black breeches. Gaiters would be worn with a clerical apron, a type of short cassock reaching to just above the knee. The purpose of this vesture was originally practical, since archdeacons and bishops were presumed to be mobile, riding horses to various parts of a diocese or archdeaconry. In latter years, the clothing took on a more symbolic dimension.[3]