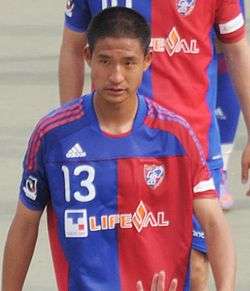 Sōta Hirayama (平山 相太, Hirayama Sōta, born 6 June 1985 in Kitakyūshū, Fukuoka Prefecture, Japan), is a Japanese footballer who currently plays for FC Tokyo. He has represented Japan's U-20 team at the 2003 and 2005 FIFA World Youth Championship, and the U-23 team at the 2004 Olympics.

As a teenager, Hirayama attended Kunimi High School in Nagasaki Prefecture. There, he won the All Japan High School Soccer Tournament all three years at the school, leading the tournament in scoring in 2002 and 2003. In 2003, he played in the U-20 FIFA Youth Championship as a 17-year-old and scored two goals, including the game winner against Egypt to put Japan through to the knockout stage.[1]

After graduation in 2004, he enrolled at Tsukuba University instead of joining a professional club. That summer, Hirayama played in the 2004 Summer Olympics in Athens and the following year, played in his second FIFA World Youth Championship.

In July 2005, Hirayama joined the Eredivisie club Feyenoord on trial and a week later, he joined another Dutch side, the newly promoted Heracles Almelo.[2] He made his professional debut with Heracles on 20 August 2005 against ADO Den Haag, playing 15 minutes and scoring 2 goals.[3] He finished the 2005–2006 season with 31 appearances and 8 goals.

Although both Japan's senior side manager Zico and Japan Football Association chairman Saburo Kawabuchi praised Hirayama's progress with Heracles, he was not called up to Japan's squad for the 2006 FIFA World Cup.

On 4 September 2006, after the transfer period ended Heracles Almelo announced that Hirayama left the club by mutual consent and after being released he returned to Japan to finish his study.[4] Only a few days later he signed a contract with FC Tokyo without informing Heracles as a free agent, while he still had a contract until 2008 before his release. Heracles appealed to this unexpected move by Hirayama.[5]

Hirayama has played for younger Japanese national teams including their U/20's and U/23's team. His debut for the senior team came on 6 January 2010 in a 2011 AFC Asian Cup qualifier against Yemen, and would be a game he would never forget. After 30 minutes, Japan were down 2–0, but Hirayama scored a hat trick to help Japan to a 3–2 victory. It was the first time in 80 years and the second time overall for a Japan player to score three goals on his debut. Takeo Wakabayashi last managed that in 1930.[6]