Muriqui started his senior career in 2004 with Madureira. Considered as a talented player, he was loaned to several higher level Brazilian clubs including Vasco da Gama, Avaí and transferred to Desportivo Brasil in 2008. Muriqui was called up for Brazil U-20 while he was playing for Vasco da Gama.

On 14 April 2009, Muriqui was loaned to Campeonato Brasileiro Série A club Avaí again. In season 2009, he was considered as one of the best players in the club, with 139 fouls suffered throughout the season, which was the highest in the league.[2]

On 30 June 2010, China League One club Guangzhou Evergrande confirmed that they had signed Muriqui on a four-year deal from Atlético Mineiro with a club record fee (as well as the domestic record fee) of US$3.5 million.[5][6] He made his League One debut for Guangzhou against Nanjing Yoyo on 21 July and scored four goals in the match. In season 2010, Muriqui scored 13 goals in 14 appearances as Guangzhou finished first place in the League One and won promotion back to the top flight at the first attempt. 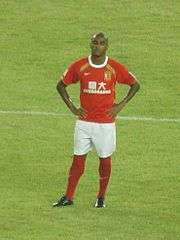 Although Guangzhou signed a few strong players to strengthened the team's attacking power including Argentinian Darío Conca and Brazilian Cléo in the 2011 league season, Muriqui was still the most important part of the club. He scored his first two CSL goals in a 2–2 home draw against Beijing Guoan on 17 April 2011. On 4 May, Muriqui scored a hat-trick in a 2011 Chinese FA Cup match which Guangzhou Evergrande beat China League One side Guizhou Zhicheng at Yuexiushan Stadium. He became Guangzhou's first player to score a hat-trick in the Chinese FA Cup.

On 12 August 2011, a conflict near the end of first half in the match while Guangzhou played away against Liaoning Whowin became the center of attention. In a hearing hold by Chinese Football Association 4 days later, the CFA believed that Muriqui struck Zhao Junzhe in the conflict, which resulted in a ban of 5 matches (including reserve league) and him being fined ¥25,000.[7] Muriqui expressed his disappointment about the ban which he believed to be unfair in his Weibo and said he would leave China at the end of the season.[8] However, after several talks with the club, Muriqui changed his mind and said he would happy to stay in China and fulfil his contract. Although missing 4 matches of the league, Muriqui scored 16 goals in 26 appearances in the season which made him the top goal scorer of the league. Guangzhou successfully achieved Super League champion for the first time in the club's history. Muriqui won the CFA Footballer of the Year award in December 2011.[9][10]

Muriqui started the 2013 season well by making a goal and an assist in the first round of 2013 AFC Champions League group stage match, a 3–0 home victory over J. League side Urawa Red Diamonds.[14] The goal he scored in this match made him the top scorer of Guangzhou's professional history, overtaking Luis Ramírez's previous club record of 48 goals.[15] He continued his excellent form in the Champions League, scoring six goals in the first five group stage match including one goal in the 3–0 home victory against Urawa Red Diamonds, one goal in the 1–1 away draw against Jeonbuk Hyundai Motors,[16] one goal in the 4–0 home victory against Muangthong United,[17] two goals in the 4–1 away victory against Muangthong United[18] and one goal in the 3–2 away defeat against Urawa Red Diamonds.[19] Muriqui scored his seventh and eighth Champions League goals in the both legs of round of 16 against Australia's A-League side Central Coast Mariners while Guangzhou won 5–1 on aggregate.[20][21] On 18 September 2013, he scored his ninth goal in the second leg of quarter-finals against Qatar's Lekhwiya in a 4–1 away win.[22] On 25 September 2013, he scored twice in the first leg of semi-finals during a 4–1 away win against Kashiwa Reysol.[23] He hit a brace in the second leg at Tianhe Stadium in a 4–0 home victory against Kashiwa Reysol on 2 October, bringing his tally to 13 goals in 12 Champions League games.[24] It was also the highest number of goals ever scored by one player at a single AFC Champions League tournament, breaking Brazilian striker Ricardo Oliveira's record of 12 goals in the 2012 AFC Champions League.[25] Although Muriqui didn't score in the both legs of 2013 AFC Champions League Final against K-League side FC Seoul, he provided a crucial assist in the second leg on 9 November 2013 which Elkeson converted into the goal.[26] Guangzhou Evergrande secured the title on the away goals rule and became the first Chinese club to be crowned Asian club champions since 1990. Muriqui won the top goalscorer and Most Valuable Player award of the competition.[27] On November 26, he was named AFC Foreign Player of the Year at the AFC Annual Awards ceremony.[28] Muriqui played all three matches for Guangzhou Evergrande in the 2013 FIFA Club World Cup. On 21 December 2013, he scored a goal in the third place match against his former team Atlético Mineiro.[29]

Muriqui was linked with Qatar Stars League side Al Sadd and Saudi Premier League side Al Shabab after the end of the 2013 season.[30][31] However, he eventually decided to stay in Guangzhou for the 2014 season.[32] He suffered a muscle bruise in the pre-season training. Although Muriqui caught up the first match of the season against Melbourne Victory in the 2014 AFC Champions League just in time, he was substituted off by Liao Lisheng when Guangzhou was losing 2–0 in the first half.[33] He had to fight with the injury in the first half of the season and scored his first goal of the season against Liaoning Whowin on 26 April 2014. He scored twice in the first leg of the Round of 16 in the 2014 AFC Champions League, which ensured Guangzhou beat J League side Cerezo Osaka 5–1 at Nagai Stadium.[34]

On 10 July 2014, Al Sadd announced that they had officially signed Muriqui.[35] According to Guangzhou Evergrande, the transfer fee was up to US$8 million.[36] On 13 August 2014, Muriqui made his official debut for Al Sadd in the 2014 Sheikh Jassem Cup and scored two goals in the match, which ensured Al Sadd beat Lekhwiya 3–2. He kept on playing in the quarter-finals of 2014 AFC Champions League against Saudi Arabian team Al-Hilal. He didn't score in both legs as Al Sadd was eliminated with 1–0 on aggregate. He suffered a muscle bruise recurrence in late August and received surgical treatment in early September 2014. Muriqui made his return on 28 February 2015 in a league match against Lekhwiya. On 22 March 2015, he scored first time in the Qatar Stars League against Al-Khor, which ensured Al Sadd's 5–1 away victory. In February 2016, Muriqui was removed from Al Sadd's squad.