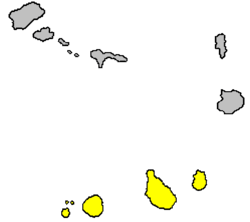 The Sotavento islands (literally, the Leeward), is the southern island group of Cape Verde archipelago.

There are four main islands: Brava, Fogo and Santiago are rocky and volcanic agricultural islands, with the longest histories of human habitation and densest populations in the Cape Verdes. Maio lies to the east and is a flat desert island whose economy was primarily based on salt, giving it more in common with Sal and Boa Vista among the Barlavento.

The islets Ilhéu Grande, Ilhéu de Cima, and the minor islets Ilhéu do Rei, Ilhéu Sapado and Ilhéu Luís Carneiro make up the Ilhéus Secos (or Ilhéus do Rombo) islets group north of Brava. The little Ilhéu de Santa Maria lies off Santiago and the like.

This article is issued from Wikipedia - version of the 1/12/2015. The text is available under the Creative Commons Attribution/Share Alike but additional terms may apply for the media files.