The South Region of Brazil (Portuguese: Região Sul do Brasil) is one of the five regions of Brazil. It includes the states of Paraná, Santa Catarina and Rio Grande do Sul and covers 576,409.6 square kilometres (222,553.0 sq mi), being the smallest portion of the country, occupying only about 6.76% of the territory of Brazil. Its whole area is smaller than that of the state of Minas Gerais, in Southeast Brazil, for example. It is a great tourist, economic and cultural pole. It borders Uruguay, Argentina, and Paraguay as well as the Centre-West Region, the Southeast Region and the Atlantic Ocean.

By the time the first European explorers arrived, all parts of the territory were inhabited by semi-nomadic hunter-gatherer Indian tribes, who subsisted on a combination of hunting, fishing, and gathering.

European colonization in Southern Brazil started with the arrival of Portuguese and Spanish Jesuits. They lived among the Indians and converted them to Catholicism. Colonists from São Paulo (Bandeirantes) arrived in the same period.[2] For decades, the Portuguese and Spanish crowns disputed over this region. Due to this conflict, the King of Portugal encouraged the immigration of settlers from the Azores Islands to Southern Brazil. Between 1748 and 1756, six thousand Azoreans arrived. They composed over half of the population of Rio Grande do Sul and Santa Catarina by the late 18th century.[3] 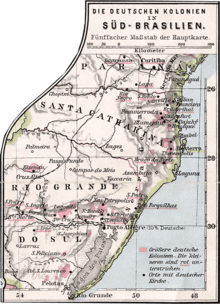 Areas of German settlement in Southern Brazil (pink), in 1905 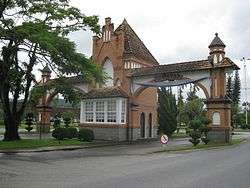 The first Germans came to Brazil soon after independence from Portugal in 1761. Settlers from Germany were brought to work as small farmers because there were many land holdings without workers. To attract the immigrants, the Brazilian government had promised them large tracts where they could settle with their families and colonize the region. The first immigrants arrived in 1824, settling in the city of Sao Leopoldo, and over the next four decades, another 27,256 Germans were brought to Rio Grande do Sul to work as smallholders in the country.[4] By 1904, it is estimated that 50,000 Germans had settled in this state.

In Santa Catarina, most German immigrants were not brought by the Brazilian government but by private groups that promoted the immigration of Europeans to the Americas, such as the Hamburg Colonization Society. These groups created rural communities or colonies for immigrants, many of which developed into large cities, such as Blumenau and Joinville, the largest city in Santa Catarina.

Considerable numbers of immigrants from Germany arrived at Paraná during the civil war, most of them coming from Santa Catarina or Volga Germans from Russia.[5]

The Ragamuffin War was a Republican uprising that began in Southern Brazil (Rio Grande do Sul and Santa Catarina) in 1835. The rebels, led by generals Bento Gonçalves da Silva and Antônio de Souza Netto with the support of the Italian warrior Giuseppe Garibaldi, surrendered to imperial forces in 1845. This conflict occurred because in Rio Grande do Sul, the state's main product, the charque (dried and salted beef), suffered the hard competition of charque from Uruguay and Argentina, which had free access to the Brazilian market while the gaúchos had to pay high taxes inside Brazil. The Italian revolutionary Giuseppe Garibaldi joined the rebels in 1839. With his help the revolution spread through Santa Catarina, in the northern border of Rio Grande do Sul. After many conflicts, in 1845 peace negotiations ended the war.

Italian immigrants started arriving in Brazil in 1875. They were mostly peasants from the Veneto in Northern Italy (but also from Trentino and Lombardia) attracted to Southern Brazil to get their own lands and populate the South. Most of the immigrants worked as small farmers, mainly cultivating grapes in the Serra Gaúcha. Italian immigration to the region lasted until 1914, with a total of 100,000 Italians settling in Rio Grande do Sul in this period and many others in Santa Catarina and Paraná.[6]

Southern Brazil has subtropical or temperate climate. The annual average temperatures vary between 12°C (53.6°F) and 22°C (71.6°F). It snows in the mountain ranges.

The region is highly urbanized (82%) and many cities are famous for their urban planning, like Curitiba and Maringá, both in Paraná State. It has a relatively high standard of living, with the highest Human Development Index of Brazil, 0.859 (2007), and the second highest per capita income of the country, $13.396, behind only the Southeast Region. The region also has a 98.3% literacy rate.

Portuguese, the official language of Brazil, is spoken by the entire population. In the south countryside, dialects of German or Italian origins are also spoken. The predominant dialects are Hunsrückisch and Venetian (or Talian). In Rio Grande do Sul and Curitiba there are some Yiddish speakers. In the northern region of Paraná there are some Japanese speakers. In the region around Ponta Grossa there are also some Dutch speakers. There are Polish language and Ukrainian language speakers in Paraná as well.[22][23]

Rio Grande do Sul has a great potential for palaeontological tourism, with many paleontological sites and museums in Paleorrota. There is a large area in the center of the state that belongs to the Triassic. Here lived Rhynchosaur, thecodonts, exaeretodons, Staurikosaurus, Guaibasaurus, Saturnalia tupiniquim, Sacisaurus, Unaysaurus and many others.