Paraná (Portuguese pronunciation: [paɾaˈna][2]) is one of the 26 states of Brazil, located in the south of the country, bordered on the north by São Paulo state, on the east by the Atlantic Ocean, on the south by Santa Catarina state and the Misiones Province of Argentina, and on the west by Mato Grosso do Sul and the republic of Paraguay, with the Paraná River as its western boundary line.

Its area is 199,307.922 km2 (76,953.219 sq mi), slightly smaller than Romania, a country with similar shape. It is subdivided into 39 municipalities. Its capital is the city of Curitiba. Other major cities are Londrina, Maringá, Ponta Grossa, Cascavel, São José dos Pinhais and Foz do Iguaçu.

Crossed by the Tropic of Capricorn, Paraná has what is left of the araucaria forest, one of the most important subtropical forests in the world. At the border with Argentina is the National Park of Iguaçu, considered by UNESCO as a World Heritage site. At only 40 km (25 mi) from there, at the border with Paraguay, the largest dam in the world was built, the Hidroelétrica de Itaipu (Itaipu Hydroelectric Dam). The crime rate is considered low by brazilian standards[3] and the state is one of the most developed in the nation.[4]

Paraná is bounded on the north by São Paulo state, on the east by the Atlantic Ocean, on the south by Santa Catarina state and the Misiones Province of Argentina, and on the west by Mato Grosso do Sul and the republic of Paraguay, with the Paraná River as its western boundary line.

The state can be separated into five main topographic areas, from east to west: a coastal zone, the mountains of Serra do Mar, and then three plateaus, each lower than the other, until the Paraná River is reached.[6] 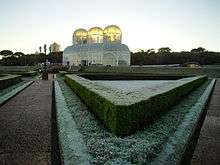 Frost at Botanical Garden of Curitiba

Paraná is characterized by three climatic types: Cfa, Cfb and Cwa the in the Köppen climate classification. The Cfa climate, subtropical with good distribution of annual rainfall and hot summers, happens in both different parts of the state, the coastal plain and parts of lower altitude of the plateau, that is, in its western part. Average temperatures recorded per year is 19 °C (66 °F) and rainy index of 1,500 millimetres (59.1 in) per year, something higher elevation on the coast than inland.[7]

The Cfb climate, subtropical with good distribution of annual rainfall and mild summers, takes place in the portion of higher elevation and covers the crystalline plateau, the paleozoico plateau and the eastern portion of the basaltic plateau. The average annual temperatures range around 17 °C (63 °F) and the rainy index reaches more than 1,200 millimetres (47.2 in) per year.[7]

The climate Cwa, subtropical with hot summers and dry winters, has occurred in the north-western part of the state territory. It is what is called a tropical climate, because in contrast to the two described above, whose good distribution of rainfall is registered throughout the year, this has characteristic rainy index of tropical systems, with dry winters and wet summers. The thermal medium per year varies around 20 °C (68 °F) and the wet content amounts to 1 millimetre (0.0 in) to 300 millimetres (11.8 in) per year. Almost the entire state territory is subject to a number greater frost per year. Snow is a phenomenon occasionally visible in the region of Curitiba.[7]

Parana is the sixth most populous state in Brazil. Its level of urbanization is 83.5%.[8]

Mill in the Dutch colony of Castrolanda

Parana's population is primarily of Eastern European origin, but Germans, Portuguese, and Japanese also settled in the state.[10] A variation of German known as Paraná-Wolga-Deutsch originated in the area.[11]

Initially settled by the Guarani and Kaingang Amerindians, until the 17th century, virtually no European presence existed in Paraná. The number of settlers grew around 1750 and the population was composed of Amerindians, Portuguese, and some Spaniards. African slaves from Angola and Mozambique were also present, but in fewer numbers than in other Brazilian areas, because Paraná was an unexplored region that did not need much slave manpower. As part of the province of São Paulo, immigration grew in the mid-19th century, mostly composed of Italian, German, Polish, Ukrainian, and Japanese peoples. While Poles and Ukrainians are present in Paraná, their presence in the rest of Brazil is almost nil. In the early 20th century, two waves of migration to Paraná occurred: one coming from the north, mostly of Portuguese, but also of African and Amerindian origin, and another from southern Brazil to the southwest and west, mostly of Portuguese, Italian, and German origins.[12][13] 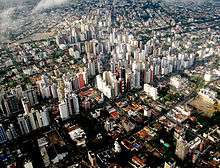 Two of the biggest football sides in the state are Clube Atlético Paranaense and Coritiba Foot Ball Club, who play the Atletiba derby.[17] Curitiba was one of the 12 host cities of the 2014 FIFA World Cup.