St Benedict's School, usually referred to as St Benedict's, is a British co-educational independent Roman Catholic day school situated in the Greater London suburb of Ealing, West London. Although a Catholic school it accepts pupils of all faiths.[3] 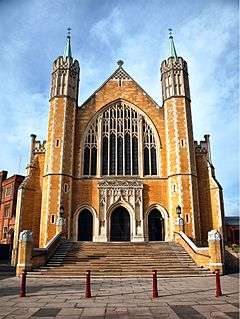 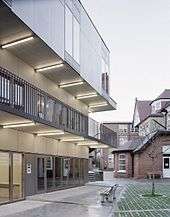 St Benedict’s School, Ealing was established following the arrival of Benedictine monks from Downside Abbey into Ealing in 1897 to found the first Benedictine Abbey in London since the Reformation. Under the leadership of Dom Sebastian Cave, Ealing Priory School, as the School was known, (becoming St Benedict's School in 1948) opened on 2 October 1902, with three boys enrolled. The School was founded upon a £5 donation, which was later published in the first "Priorian Magazine".

The school has occupied various premises at various times in its history, firstly in Blakesley Avenue, then taking rooms in the priory in 1904 before moving across to Orchard Dene (which currently houses the Junior School) in Montpelier Avenue. In 1906 15 acres (61,000 m2), about a mile from the main school grounds, in Perivale were purchased to provide a sports ground. By the 1920s Orchard Dene was used for boarders and the school was located in two houses on Eaton Rise. A purpose built school building linking these houses was in use by 1936. During the Second World War pupils were evacuated into the now Junior School - boarding ceased - and the Abbey church was badly damaged by a bomb on 7 October 1940.[4]

The Junior School was 'spun off' as a separate entity with its own headmaster, in 1946. The Junior School's first lay headmaster, Dennis McSweeny, was appointed in 2000. The present headmaster, appointed in 2005, is Mr Robert Simmons, himself a former pupil of St Benedict's School. Visits to many places of interest in London, and further afield, extend pupils’ knowledge and understanding of the world around them. In Year 5, pupils visit Normandy and in year 6 they visit the Lake District on a PGL style activity. The school has links with the local and wider community through supporting local and international charities. Concern for the environment is demonstrated, for example by the purchase of a piece of land in Central America which has been planted with trees. Each year on the official feast of St Benedict, a whole school (Junior and Senior) charity day takes place at the end of March to support a charity of the pupils' choosing.

A co-educational Nursery was founded in 2002, in the building on Montpelier Avenue which formerly housed the Middle School. The Governors have approved plans for a three storey development to replace the existing ‘Ark’ in the Junior School. Work on this is scheduled to start in summer 2016 and, when complete, this new building will house the Pre-Preps and also the Nursery, which will be re-located to the main site.

In October 2009, Dom David Pearce, a monk of Ealing Abbey and former headmaster of the Junior School, was jailed for eight years, subsequently reduced to five years, for sexual abuse offences at the school in the period from 1972 - 1992 and for one further offence in 2007 after he had ceased to work in the school.[5][6] In March 2011 Dom Laurence Soper, the Abbot of Ealing Abbey during the 1990s, was arrested on child abuse charges relating to the period when he was a teacher at, and the bursar of, St Benedict's School; it was reported in October 2011 that he had failed to answer bail and was being sought by the police.[7] In 2016 he was arrested in Kosovo and extradited to the UK to face trial.[8]

In the light of these matters, and other alleged but unproven offences, the Abbot commissioned a report to be prepared by Lord Carlile of Berriew with a view to making recommendations on the School's governance.[9] As a result of the changes made the Independent Schools Inspectorate said in its 2013 inspection report that the pastoral care at St Benedict's was excellent.[10]

In October 2011 the Congregation for the Doctrine of the Faith ordered its own enquiry into the same matters, to be conducted by Bishop John Arnold.[11]

Since its foundation members of the monastic community at Ealing Abbey have taught at, and provided pastoral, spiritual and educational leadership, within the School. Until the Senior School's first lay headmaster, Dr A.J. Dachs, was appointed in 1987, all headmasters were monks of the Abbey. Since 1951 the Senior School headmaster has been a member of the Headmasters' and Headmistresses' Conference.

Following the recommendations of the Carlile report (see above) the School, which had been under the trusteeship of the monks of Ealing since its foundation in 1902, became an independent charity in the form of a company limited by guarantee, independent of the Abbey Trust. New governance arrangements, with a lay chairman, came into effect from September 2012.[9]

Student Representation and the Student Council

Following a report [12] by the Independent Schools Inspectorate (ISI) recommending that the school explore are more efficient means of internal student representation the formation of a School Council occurred with formal powers outlined in its Constitution. The School Council in its current form was founded by its first chairman, Sean Keeley (Leaver, 2016)

Students may run in elections throughout the school,[13] from Form 3 to the Upper Fifth - two representatives are elected from each year. The Sixth-Form can run for the office of Student President and Chair of the Sixth-Form Common-Room. In October 2015 Sean Keeley [14] was elected to represent the School as the inaugural Student President, winning 83% of the vote.

The structure of the School Council consists of a Student President, and the Student President's Chapter. Members are appointed onto the chapter at the pleasure of the newly elected Student President to represent students in key areas: Food and Health, Estates and Buildings, Pastoral and Equality, Finance and Investment, Sixth-Form, Upper and Middle Schools and the Vice President's office.

The first codified School Council Constitution was signed in January 2016 by the Student Heads of School, Student President, School Chaplain, Headmaster, Chair of the Sixth-Form Common-Room, Leader of the Upper and Middle School Council and the Chair of the School Governing Body.[9]

From the Upper 4th onwards House Captains are appointed in each division, while in Form 3 and Lower 4th there are House representatives. In addition House Colours are awarded from the Upper 4th for outstanding contribution to the life of the School.

Members of the Upper Sixth may apply to be a prefect, known as "Decans" or "Senior Decans". Their roles include helping at parents' evenings and other school events such as concerts, plays and dinners. The Heads of the Decans and Senior Decans are the Student Heads of the School.

Instead of the conventional naming convention of Reception, Year 1, Year 2 etc., the School adopts the following naming system for each academic year from age 5 to age 18:

The School promotes Catholic Benedictine values through its mission of "Teaching a way of living", based on The Rule of St Benedict. Registration sessions are accompanied by prayer, in which pupils participate and sometimes lead. Mass is celebrated weekly in the School chapel or in the Ealing Abbey, for those staff and pupils who wish to attend. Retreats organized for each year group give time for reflection and for spiritual growth. Trips are organized, for instance to Rome on a study pilgrimage and to Lourdes, where pupils develop their understanding or are able to express their commitment to service.[10]

The Independent Schools Inspectorate noted in its 2013 report that, at all ages, pupils' personal development is excellent. In line with the Benedictine mission, pupils show respect for themselves, for others and for the world around them, in 'learning how to live'. They enjoy relationships with peers and adults alike and their spiritual, moral, social and cultural development is outstanding.[10]

The main sports for boys are rugby and cricket and for girls are netball, hockey and rounders. The School also offers other sports including fencing, tennis, swimming, basketball, athletics and boys' hockey.[15]

In rugby the School was runner-up in the NatWest Schools Cup at Under 18 level in 2008; at Under 15 level it was winner in 2005 and runner-up in 1993.[16] The School XV was undefeated in 2008 in 21 of 22 league matches, finishing top of the Canterbury Rankings,and was selected by the Rugby Football Union to represent England in the Sanix World Rugby Youth Invitational Tournament, losing only to the eventual winner. The Under 13 side won the 2012 Junior Champions of the Rosslyn Park National Schools Sevens, the world's largest rugby tournament.[17]

In the Senior School there are over 70 clubs and societies. Pupils run a debating society, staff a Combined Cadet Force and participate in the Duke of Edinburgh Award Scheme,[18] as well as producing art, music and drama.[19] The Junior School runs a daily programme of after-class hobbies including Mandarin, ballet, chess, cross stitch, fencing, computing and swimming. Both Senior and Junior School pupils contribute to the Priorian, the School magazine.

It was announced in June 2015 that Mr Andrew Johnson, the Head of Stonyhurst College, was to become headmaster from September 2016 on the retirement of Mr Cleugh.[21]

Alumni of the school are known as Old Priorians, referring to its original name of Ealing Priory School, and include:

The Lord Patten of Barnes, an Old Priorian himself, serves as an Advisory Governor (Patron) to the school.[25]